Patna Pirates were in action against the Gujarat Giants in the 94th match of the Pro Kabaddi League Season 8 as the men in green established their dominance over their opponents with the scoreline reading 43-23 at the end of the final whistle. Mohammadreza Chiyaneh was stellar once again as the Iranian defender picked up a career-best 8 points to his name to facilitate the Pirates’ victory over the Gujarat Giants.

The young superstar defender was on fire tonight as he had an accuracy of 80% and became the second defender in the league this season to join the prestigious 50-point club. The Pirates defense picked 14 points against their opponents and it has been one of the key reasons for their success this season. The Patna-based franchise has been the best defensive side this season and it was evident with their performance against the Giants.

The defense was aptly supported by the raiding trio of Prashant Kumar Rai, Guman Singh, and Sachin Tawar. The trio picked up a total of twenty-one raid points with Guman leading the charge in the absence of regular strike raider Monu Goyat, who was rested for tonight’s game after a mediocre showing against the Jaipur Pink Panthers in his previous appearance. Guman proved the coach’s decision to start him over Monu in with an electric performance racking up eleven points to his name scoring his second Super 10 of the season.

On the other hand, Gujarat Giants will be very disappointed with theory performance tonight as they bottled their ten-point lead over their opponents and could never make a comeback in the game after facing their first all-out in the final five minutes of the first half. None of the players other than Mahender Rajput was able to pose a threat to the Pirates and almost surrender in front of their opponents. Mahender was the leading scorer for his side, accumulating six points to his name. 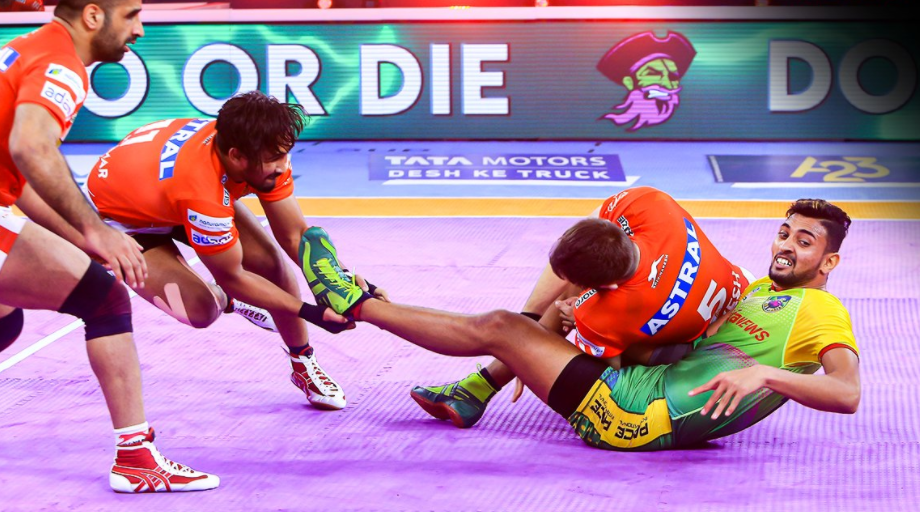 The team however looked a completely different side after the all-out as Prashant’s men used their entire might to fire back and returned the favor with an all-out of their own over the opponents in the sixteenth minute of the game to even the scores at 16 points each with just four minutes remaining in the first half.

The team continued to exploit their opponents and at the end of the first half had a six-point advantage over their opponents leading into the final half of the game. The Patna-based franchise picked up from right where they left in the second half as Guman produced a stunning three-plus two-point raid to ensure the second all-out of the game upon their opponents.

Mohammadreza who looked dull in the first ten minutes of the game, went on a tackling spree as the defender started to pick off the raiders one after the other. The Iranian received great support from his teammates who were right on the mark with their support and blocked all paths of exit for the raiders. Patna never gave Gujarat to make a comeback in the game and ensured a comfortable 23-43 finish at the draw of the final whistle.

The Pirates with the win over their opponents are now at the second spot on the points table with 55 points to their name in 15 appearances and have a two-game advantage over the table-toppers in Dabang Delhi who have 57 points in 17 games.

The team will face the defending champions Bengal Warriors in their upcoming fixture on Sunday and will look to make their way to the top spot on the table with a win over their opponents.