Three-time champions Patna Pirates will square off against lowly-ranked Puneri Paltan in Match No. 70 of the Pro Kabaddi League Season 8 at the Sheraton Grand and Convention Centre in Whitefield in Bengaluru on Saturday.

Both teams like to play it safe while surging forward and pouncing on the Do-or-Die raids. While the Pirates have 37 points from that avenue, the Paltans have 38 points, occupying the fourth and third position among all teams on the leaderboard.

Defensively, the Pirates hold the upper hand as they average 11.82 tackle points per game – the highest in the league – but the Paltans bag 9.91 tackle points from an average match.

Both sides occupy places in the lower half of the leaderboard in terms of average raid points as Patna is ninth (18.91) while the Pune-based team is eleventh (18) in the twelve-team league.

Patna began their PKL 8 campaign on a high note, winning four of their first five encounters. The only loss which they suffered came against UP Yoddha, that too by a one-point margin.

The Pirates shared the spoils with Tamil Thalaivas in a 30-30 tie before eking out Gujarat Giants by a solitary point. Patna registered a gigantic 20-point victory over U Mumba in their next match, courtesy of their defensive unit’s 18 cumulative tackle points.

However, they had a topsy-turvy campaign later by losing to Jaipur Pink Panthers by 9 points before rebounding to a seven-point win over Bengaluru Bulls. In their last game against Dabang Delhi, they succumbed to a 32-29 loss in a thrilling encounter.

Unlike the Pirates, the Paltans began their campaign on a sour note, losing four of their first five encounters. Their only victory came via a margin of one point, which happened to be against bottom-placed Telugu Titans.

However, the Paltans put their losses behind quickly, winning three of their next four matches by healthy margins. But, UP Yoddha gave them a reality check by humbling them by 10 points as Aslam Inamdar and Mohit Goyat’s Super 10 lay waste.

In their previous game against Haryana Steelers, the Paltans lost by seven points as their opponents outclassed them both defensively and offensively.

Patna Pirates hold the upper hand over Puneri Paltan as they beat them 11 times in their fifteen encounters. Two contests between the two sides ended in a draw while two matches ended in the Paltans’ favor.

Patna Pirates beat Puneri Paltan 38-26 the last time these two sides squared off. Sachin Tanwar bagged a Super 10 for his side while receiving support from Prasanth Kumar Rai who collected 5 touchpoints in the game.

Neeraj Kumar: Patna’s Neeraj is in hot-form defensively as he collected 3 and 4 points for his side in the last two encounters respectively. Against a weaker opponent like the Paltans, he would be hoping to earn his second ‘High 5.’

Aslam Inamdar: Displaying maturity above the age in his debut PKL season, Aslam has picked up 2 ‘Super 10’s’ and averages 6.73 raid points per game. He makes the most of his height to get out of the opposition’s tackle attempts. 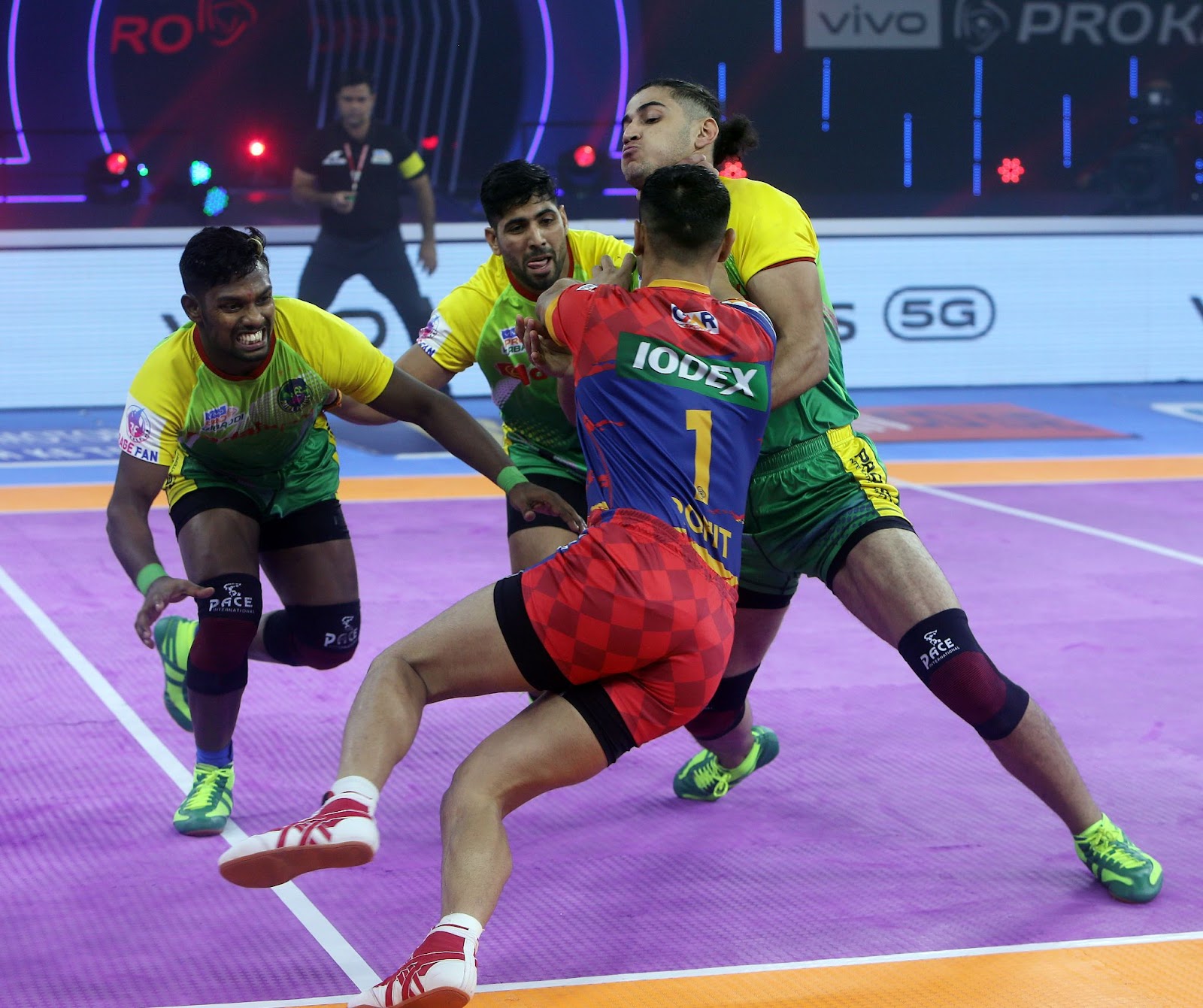 Patna Pirates’ defenders try to trap a UP Yoddha raider

The Pirates have both momentum and quality on their side against a young Puneri Paltan outfit. With a superior head-to-head record as well, it would be nothing but an upset if the Paltans emerge on the top. Hence, we predict a comfortable Pirates win.