A big day for the top teams on Day 29 of the Pro Kabaddi League Season 9 where Bengaluru Bulls are set to compete against Haryana Steelers and a confident Tamil Thalaivas will try to upset Puneri Paltan.

Bengaluru Bulls might have lost their previous two encounters, but still, they are in the second position with six victories out of 11 matches. On the other hand, the Haryana Steelers played in a tie against UP Yoddha on Saturday and are placed in the ninth spot in the table.

The second match of the day will be a classic one where comeback king Tamil Thalaivas will take on the table-toppers Puneri Paltan. Both sides are playing tremendously and would look to maintain their rhythm.

The Thalaivas have been magnificent in the Pune leg, having won four battles and secured the third spot in the table. Puneri Paltan, on the other hand, lost by just one point against Tamil Thalaivas on Super Sunday, in their previous battle making this a perfect time for the Paltan to take revenge.

Let us take a look at the previews and predictions for the Day 29 matches:

Currently, Bengaluru Bulls are one of the sides which can go through to the playoffs unless some major upsets happen in the league. The franchise is well-placed at the second spot with six wins. The previous clash against Gujarat Giants was a tight affair with Vikash Khandola and Bharat scoring well in their raiding. The defense department disappointed, which became the major reason for their loss.

Haryana Steelers, on the other hand, once again relied heavily on Meetu Sharma for raiding and he did not disappoint. They managed to play a tie against the Yoddha but the same strategy won’t work against the Bengaluru Bulls. Raiders including Rakesh Narwal and Manjeet have to support Meetu if they want to beat the Bulls.

If we talk about head-to-head battles between both sides, Bengaluru is ahead with four victories while the Steelers managed to win thrice. It is going to be a good opportunity for captain Nitin Rawal & Co. to level the record.

All eyes will be on Manjeet in this clash after he showed promise against UP Yoddha. A Super 10 from him can solve the issue in this encounter. On the contrary, Skipper Mahender Singh from the Bulls would look to solve the defensive issue with his experience. He will be the man to watch out for in this match.

Bengaluru Bulls look better on paper and with some phenomenal experience in their squad, they will be favourites to win this match. But we can’t ignore the Haryana Steelers’ performance, especially in the last four matches. They played some tough games and have all the experience of playing in every scenario.

With the kind of performance the Thalaivas had given in the Bengaluru leg, it did not look like they would make this kind of comeback. The Tamil Thalaivas showed a marvellous display in the past few games. With no losses in the last five battles, they have now moved to the third spot. 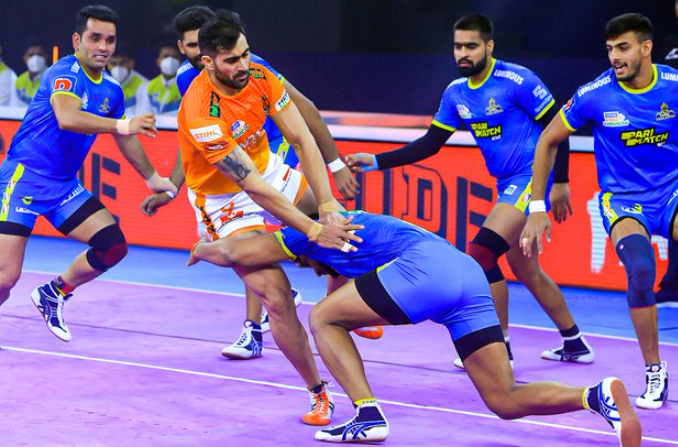 Puneri Paltan, on the other hand, has shown an effortless performance with six wins out of 11 overall so far. They are at the top of the table and would want to stay there only. Having lost their previous encounter against the Thalaivas, the Paltan would now look to settle down things in this one. Aslam Inamdar was once again the hero of the game with 15 raid points, but his lack of defending skills cost them the game.

From Tamil Thalaivas, Narender showed his class and some support from captain Sagar helped them win a thriller. Talking about the head-head-battles, the Puneri Paltan have won only twice against the Thalaivas whereas the latter became victorious thrice. The two encounters ended in a draw.

Aslam Inamdar and captain Fazel Atrachali would be important for the Puneri Paltan in this game while Narender will be the man to watch out for from Tamil Thalaivas. From the game’s perspective, Puneri Paltan is slightly ahead with the kind of combination they have in their seven. A lot depends on Fazel Atrachali and his decision-making at crucial stages.