It is going to be another triple header on Day 24 of the esteemed Pro Kabaddi League Season 9 where Patna Pirates will look to improve their standings against U Mumba in the first match. The second match will be between Naveen Kumar’s Dabang Delhi and Jaipur Pink Panthers. The last encounter of the day will include Pardeep Narwal’s UP Yoddha and the home side, Puneri Paltan.

The Patna Pirates have shown some improvement in their last 2 battles against Gujarat Giants and UP Yoddha. Both were comfortable victories that took them to the ninth spot in the point table, leaving behind Bengal Warriors, Tamil Thalaivas and Telugu Titans. U Mumba, on the other hand, has been one of the season’s safe bets from the start. They have five victories out of eight games and are in sixth place.

Dabang Delhi, who were the table toppers in the Bengaluru leg for most of the time, has slipped to the third position in the table because of their five consecutive losses. The situation in Dabang Delhi is an example of how cruel the game can be sometimes. Thanks to their fine performance in the first leg, that is helping them maintain a balance now. On the other hand, the Jaipur Pink Panthers, who are in the fourth spot, will look to win the game after three consecutive losses. Both sides are almost in a similar situation. The winner of the crucial match will take a good lead from here.

The third clash will be between Puneri Paltan and UP Yoddha, where the home side will look to grab victory in front of their major supporters, which could include Pardeep Narwal fans, too.

Let us take a look at the preview and predictions for the Day 24 matches:

Match 56: Patna Pirates vs U Mumba

After a setback in performances in the previous leg, Patna Pirates have shown improvement in the Pune leg after two successive victories. But the major challenge of reaching the playoffs is way ahead, and for that, the champion side must win big from here. U Mumba, who won their previous clash against the Bengal Warriors, will look to continue their winning momentum.

U Mumba’s defense has been exceptional in the last couple of games, with captain Surinder Singh, Rinku, and Mohit covering all the bases in their defense. Rinku became the hero of the match with two super tackles, while Mohit too got one in his bucket. The raiders failed badly, including Guman Singh, but would like to be back in this encounter after forgetting what happened against the Warriors.

Patna Pirates, on the other hand, did well against Gujarat Giants, thanks to their raiders Sachin and Rohit Gulia. The defense is still the issue with the team, with Neeraj Kumar, Sunil, and Mohammadreza Chiyaneh not providing output from their end.

The champion player, Chiyaneh, was on everyone’s mind last season but is unable to perform even half of what he did in Season 8. The battle against U Mumba is going to be crucial for the defenders of Patna as U Mumba’s raiders are out of form.

Talking about the head-to-head record of the teams, U Mumba has won nine battles out of 16, while Patna has been victorious just six times. One game ended in a draw. This is a great chance for the Bihar-based franchise to better their record against the Men in Orange. A win from here could take them to a better spot on the table.

All eyes will be on Mohammadreza Chiyaneh in this super clash after some inconsistency from the Iranian player. From U Mumba, Guman Singh needs to perform not only to put his team in a better position but to bring back his lost form. His good form can be dangerous to any of the franchises going forward. Keeping in mind the current form, U Mumba would most likely win the battle.

Season 8 champions Dabang Delhi lost their last five encounters after a brilliant start to the Bengaluru leg. The current champions will look to get back on the winning track against the Panthers. Meanwhile, the Panthers will be hoping to bring back their winning days too after three losses on the trot. 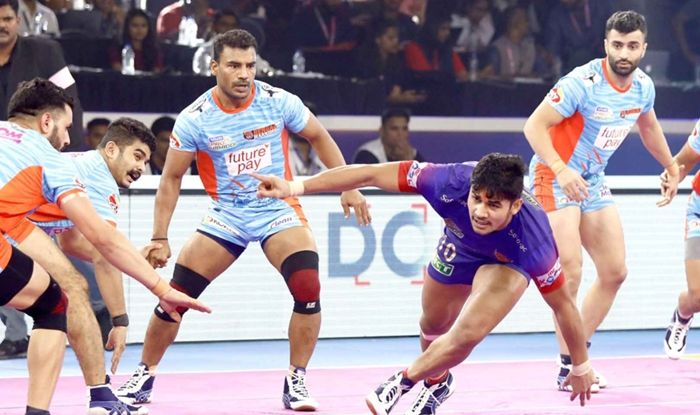 While Dabang Delhi will look to make some big calls in defense, the Panthers will do the same after some subpar defensive performances. From Delhi, only Naveen Kumar has shown promise in their lost battles, which is not a good sign for the team. On the other hand, Arjun Deshwal from JPP has been phenomenal, but he would need support from his teammates to take his side across the winning line.

In the 18 matches played to date, Dabang Delhi has been victorious on seven occasions, whereas Jaipur Pink Panthers have won nine times, with two matches ending in a tie. The defenders of both sides need to show their A-game to bring back their winning days. Only the raiders’ performance won’t matter that much.

Naveen Kumar and Ravi Kumar will be the players to watch out for from Delhi, while Arjun Deshwal’s heroics are a must for the Panthers in the Fabulous Friday clash. Even after losing five games on the trot, Dabang Delhi is the favorite to win this encounter.

Match 58: UP Yoddha vs Puneri Paltan

Puneri Paltan now has their best shot to finish first in front of their home crowd. The clash against UP Yoddha won’t be easy, but Fazel Atrachali’s men are capable of beating any side in this prominent league.

Since the return of Iranian legend Fazel Atrachali, the team has been performing exceptionally well. They were in the last four during the initial stages of the season but are now in the top three after some spectacular performances in the past. On the other hand, UP Yoddha are also coming off a victory over the Telugu Titans. 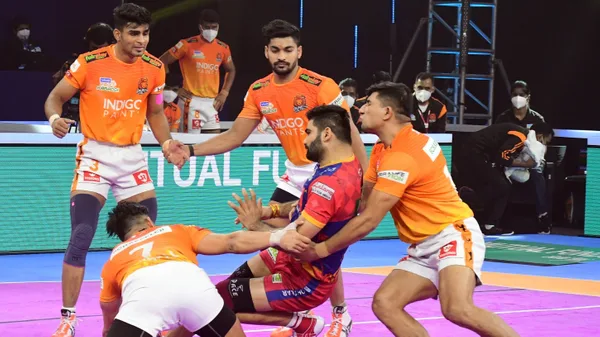 Talking about their head-to-head battles, UP Yoddha won five battles out of eight, while Puneri could only win three. This is the best chance for the in-form Paltans to register their fourth victory against Narwal’s men.

Pardeep Narwal, who missed his Super 10 and was controversially called back by his coach against the Telugu Titans, would look to showcase his best performance, while Mohit Goyat and Akash Shinde from Puneri would want to continue their elegant performances.

Skipper Fazel Atrachali will be the man to look at in this encounter after his major contribution in the last few games. All eyes will be on Pardeep Narwal from UP Yoddha, as he nearly set the tone against the Telugu Titans in the previous battle.

A Super 10 from him would make everyone pleased for sure. Keeping in mind the home factor, Puneri Paltan is slightly ahead in terms of winning this last clash on Friday.