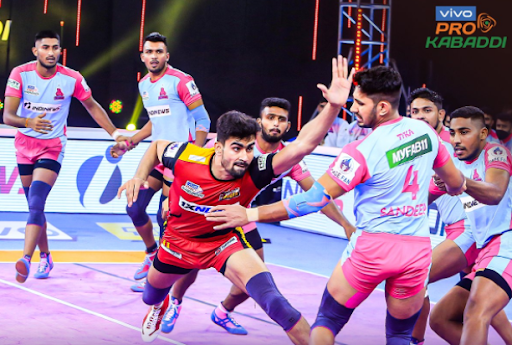 Bharat attempts for a touchpoint on Sandeep Dhull against Pink Panthers

The Jaipur Pink Panthers were up against the challenge from Bengaluru Bulls in ‘Match 104’ of the Pro Kabaddi League Season 8. Both sides are still in contention to make it into the playoff stages of the league this season and the fans witnessed a scintillating battle between the two sides as they gave their all to outscore their opponents throughout the game. The Bengaluru Bulls emerged victorious over the Jaipur-based franchise with a thumping hard fought 45-37 win.

Bharat was nothing short of electric for the team as the raider racked up fifteen points for his side leading them over the finish line, The raider was exceptionally good for the side and kept his team ahead of their opponents for the majority of the game.

Skipper Pawan Kumar Sehrawat took a backseat approach to this game and decided to support the young raider as it worked out for the team in the end. Pawan did not shy away from scoring when he had the opportunity to accumulate ten points to his name scoring his 16th ‘Super 10’ of the season.

On the other hand, the Pink Panthers were equally good on offense as their young superstar Arjun Deshwal picked up sixteen points to his name emerging as the top scorer for the contest. The raider however did not receive any support from his teammates other than Deepak Niwas Hooda as he had just six points to his name throughout the game.

The defenders were rock-solid in the first half but it all fell apart for the Pink Panthers in the second half of the game as their defense looked helpless against Bengaluru’s raiders as they could only earn a single in comparison to the Bulls who racked up seven points in the second half. 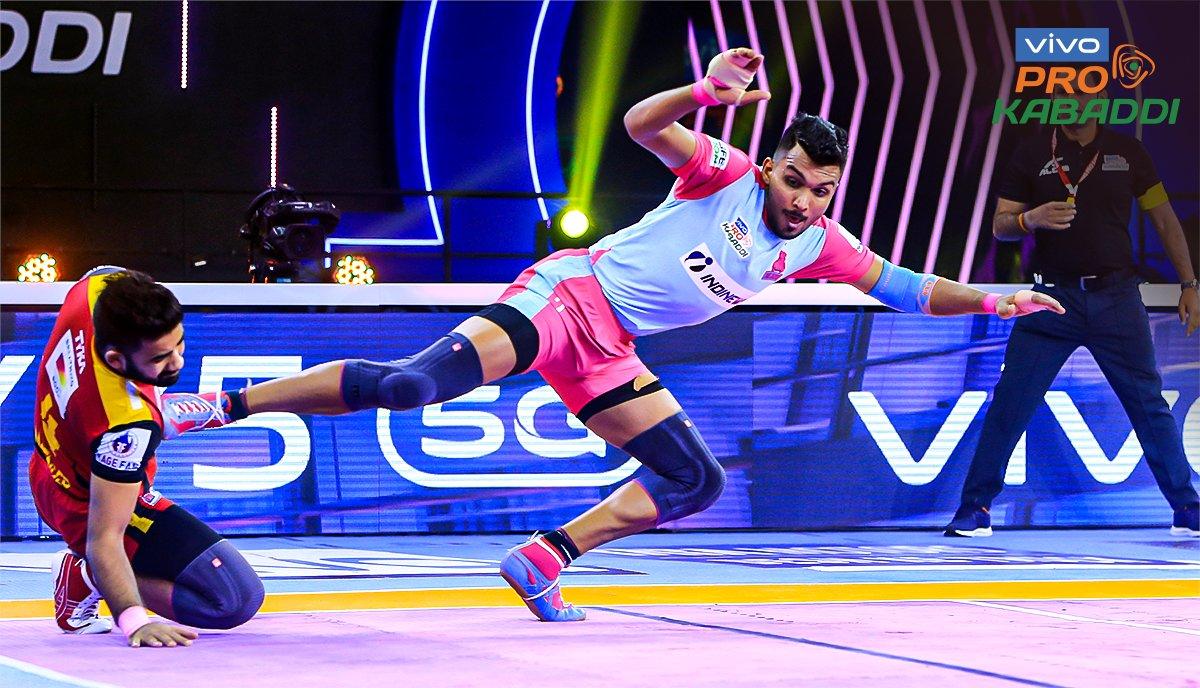 Arjun Deshwal tries to get a touchpoint against the Bengaluru Bulls

The first half of the game was evenly contested between the two sides as both sides took a quick-fire approach to the game. Raiders from both sides in Pawan and Arjun were lethal for their oppositions as they remained a constant threat for their opponents throughout the half. Jaipur found the early lead in the game, but Bengaluru was quick to bounce back as they evened the odds with consecutive raid points from skipper Pawan and Bharat.

Both the sides traded an all-out against the other as none of the two teams were willing to back out against the challenge and kept the point margin under check. Courtesy of some quick points from Bharat, the Bulls were able to find a three-point advantage leading into the second half with a point score difference of 22-19 in their favor.

The South Indian franchise was able to build on the momentum from the first half of the game as they managed to maintain a clear margin over their opponents. The team sent Jaipur packing with a second all-out in the half which crushed all chances of a comeback for the Jaipur-based franchise. The Pink Panthers looked visibly distraught after the defeat due to the sheer importance of the game, as a win over Bengaluru could have seen them climb to the top six at the points table with 57 points to their name.

Randhir Singh is bound to be impressed by the performance from Bharat as the raider has proved his worth yet again. The franchise will hope that the raider can continue his fine form, as it will take some pressure off Pawan who has been the sole strike raider for the Bulls this season. With Bharat amongst the mix, Pawan will have the opportunity to float freely instead of going headfirst into a raid.

The Bengaluru-based franchise with a win over their opponents tonight have climbed up to the fourth spot on the points table with 60 points to their name in twenty appearances. With two games still left for the franchise left in the league stages, the Bulls still have the opportunity to finish amongst the top two teams this season. However, the side will have to ensure that they win their upcoming games, as a loss could see them getting knocked out from the race to the playoffs.

On the other hand, the Pink Panthers are at the ninth spot on the points table and have a tough path ahead of them if they wish to make it to the playoffs. The franchise has 52 points to their name in 19 appearances and still has three more games to go. The team will face U Mumba in a pseudo knockout game this Tuesday as a loss could see either of the teams fail for the knockout phase of the league.