Match 93 of the Pro Kabaddi League Season 8 saw the clash between the two two teams of the league in Dabang Delhi and Bengaluru Bulls as both the sides fought to grab the top position on the points table. The high-profile clash saw a thrilling end as Manjeet Chillar’s last-second tackle on Pawan Sehrawat forced both sides to settle on three points each at the final whistle.

Dabang Delhi will be pumped after pulling off a last-second miracle against their opponents as the team managed to hold off the Pawan Sehrawat-lead Bengaluru Bulls to a 36-36 draw. The Bulls skipper looked visibly disappointed after the draw and could be seen fuming from the sidelines as Naveen Kumar ran out the buzzer on his team in the closing moments of the game.

Pawan was spectacular for his side, as the high-flyer racked up 17 points to his name consolidating his spot as the top raider in the league with 232 raid points to his name. The star raider faced some serious competition from Naveen who made a return after missing out on three games due to a knee injury. The young superstar picked right off from where he left and scored thirteen points to his name, signaling his comeback.

The defense on both sides looked a little off tonight, with the Delhi-based franchise racking up 11 points in defense compared to the 9 points scored by their opponents. Sandeep Narwal and Joginder Narwal led the Delhi defensive unit picking up four points each. However, the real star of the show was Manjeet Chillar as the veteran all-rounder picked up three crucial tackle points including the one that decided the game for the two sides.

The South Indian side on the other hand had to rely on their raiders to score for the majority of the game with both Saurabh Nandal and GB More scoring just two points each. The Bulls have been inconsistent in their defense so far this season and it was visible yet again when they faced their opponents tonight. 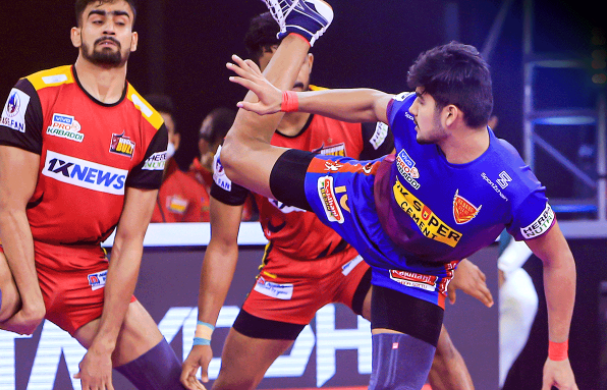 The game started off slow as both the teams tried to pick up points on the third raid, the Bulls however picked up the pace and established an early lead over their opponents with back-to-back raid points. Delhi was quick to fire back with Vijay and Naveen leading the charge against the vulnerable Bengaluru defense to even the odds.

The second half saw both the teams return to their cautious approach and slow down the pace of the game to third raids. Naveen and Pawan both looked out of breath in the second half and did not seem as effective as they looked in the first half. Other than Pawan, Bharat was the only player who seemed remarkable for the Bulls as the support raider picked up four points to his name to relieve his skipper of some pressure.

With just two minutes remaining in the game, Pawan scored a two-point raid giving his side a two-point advantage over their opponents. However, Delhi was not willing to back down from the challenge and Naveen quickly scored a touchpoint to reduce the point difference to one point. Manjeet who had been dormant for the majority of the game sprang into action and tackled Pawan with just ten seconds remaining in the game, to even the scores.

With the tie over their opponents, Delhi is now at the apex of the league table with 57 points to their name in seventeen games, with just five fixtures left to their name in the group stages the team will look to finish strong and maintain their spot in the top two to secure a direct spot in the semi-finals.

The Bulls on the other hand now have 54 points to their name in 18 games and is at the third spot on the points table, the team will have to win a minimum of three out of their four remaining games if they wish to finish at the top two spots on the points table.