The Gujarat Giants will go up against the Tamil Thalaivas in their eleventh game of the Pro Kabaddi League Season 8. The Thalaivas have faced mixed results so far this season but will like to gain some momentum with a win over their opponents in their upcoming game.

On the other hand, the Gujarat Giants will be looking to gain a win after their tie against the U Mumba in their previous game. The team has struggled due to the loss of a premier strike raider in the team as no player other than Rakesh Narwal has been able to leave an impact on the offensive front.

The Tamil Thalaivas are currently positioned at mid-table with 30 points in their ten appearances but can go in the top-four with a big win on Thursday. The South Indian franchise has won three of their games while having drawn five out of their remaining seven games as the team faced defeat on just two occasions, a record bettered by no other team in the league.

Manjeet has been consistent for the team on the offensive front as the player has produced some great performances this season. In defense, skipper Surjeet Singh has been brilliant and is leading the charge with 36 tackle points to his name while Sagar has picked up 22 points in the last ten games.

Gujarat Giants, on the other hand, have been struggling this season to produce any remarkable results. The team is currently lying at the tenth spot of the points table with just 23 points against their name. They are desperately looking for wins in their upcoming games or their hopes to make it into the playoffs are almost over.

Other than Rakesh Narwal, none of the raiders for the Giants have been able to cross the fifty-point mark for the side. In defense, the team has Girish Ernak, Paresh Bhainwal, Ravinder Pahal, and Sunil Kumar but these star defenders haven’t been able to perform up to the expectations this season.

The Gujarat Giants and Tamil Thalaivas have faced each other on four different occasions with both sides getting the better of the other in two different games. This game could act as the tie-breaker between these two sides.

Surjeet Singh: Surjeet Singh has been brilliant this season for the Tamil Thalaivas as he is the leading defender this season with 36 points to his name and has been a nightmare for the raiders who have tried to sneak in a point past him. Surjeet could add to the worries of the Gujarat Giants who already struggle without a strike raider this season.

Girish Maruti Ernak: If the Gujarat Giants have any chance of getting past the Tamil Thalaivas, Girish Ernak is one of their only hopes. The 30-year old has been their best defender this season by a margin and will be responsible to keep the duo of Manjeet and Sukesh Hegde from scoring too many points against his side. 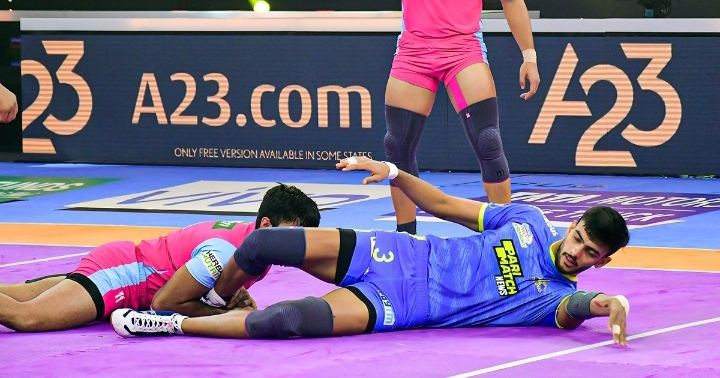 The Tamil Thalaivas hold an upper hand over their opponents in the contest based on their recent form while Gujarat has been struggling for a win this season. The Thalaivas have missed out on five wins settling for a tie with both the offensive and defensive units working in perfect sync and should easily win this contest over the Gujarat Giants.