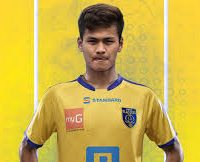 This young defensive midfielder hails from the Haokha Mamang Village in Manipur’s Thoubal district, he represented the Indian team in the FIFA U-17 World Cup in 2017 and created history after scoring India’s only goal of the tournament in a group match against Colombia. The Minerva Punjab FC youth player joined Indian Arrows on loan during I-League 2017-18 and represented them in the 2018-19 season as well. Jeakson Singh made his ISL debut in the 2019-20 season with Kerala Blasters FC.