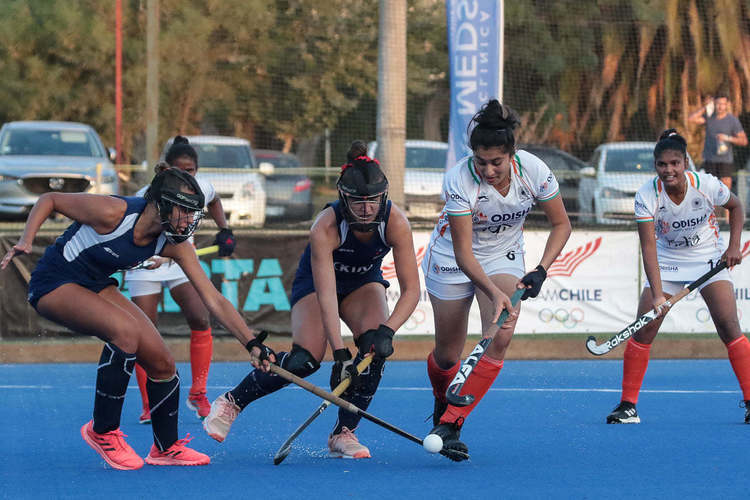 India’s women’s youth hockey team continues to win the tour of Chile. The second match ended with a score of 4:2 in favor of India. Both groups showed themselves well, but the Indian youth team could break ahead only by the fourth quarter. Throughout the game, the ball leaned towards Chile. However, by the end of the match, the Indians were still able to snatch victory.

The start of the match immediately became difficult for the Indian team. In the fourth minute of the game, Amanda Martinez was able to break the penalty corner ball after an active offensive by the Chilean group to defend the Indian national team. Girls from Chile snatched the advantage and were not inferior until the twenty-first minute of the match. Forward of the Indian team Mumtaz Khan, brilliantly restored equality in the game and brought her team’s first point. After such an unsuccessful start for Indian hockey players, this ball became a breath of fresh air.

For the next twenty minutes, each team tried to break forward, come closer to the opponent’s goal, but the forces were equal, and these attempts were not successful. At the thirty-first minute of the game, the Chileans had a chance to get an advantage in the match when they had the opportunity to break through the corner. However, the Indian defense was strong enough to repel the ball.

But even this did not save the Indian youth team from the second goal in their goal when in the forty-first minute of the game, Domina Luders shot on purpose, and the ball ended up in them. Again, the Chilean team gained an advantage, forcing the Indian hockey players to wake up and finally act.

Hockey players of India took ten minutes to equalize with the team of Chile. In the fifty-first minute, Gagandip Kaur scored a goal and equalized. After that, the Indian team seemed to be replaced. Two minutes later, in the fifty-third minute of the game, Sangita Kumari earned a point for the team and brought it forward. The Indian squad secured its leadership in the match when Gagandip Kaur again scored the ball against the Chilean team in the fifty-ninth minute and ended the game on this particular note.

This match was ambiguous for the Indian youth team. However, the girls proved that they could turn events in their direction, even in a stressful situation, and gain an advantage over the opponent.