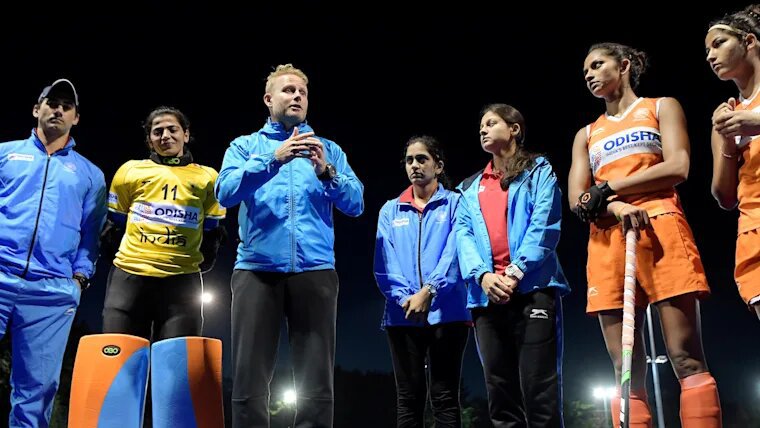 Indian women’s hockey head coach Sjoerd Marijne summed up the results of the training camp. Recall that the women’s national hockey team for four months lived at the training base. The head coach is pleased with the result of the team.

This season was a great test for sports. The women’s hockey team of India did not do without difficulties. Due to the epidemiological situation, all competitions were cancelled both abroad and in the expanses of the country. For athletes, competitions are an important part of the way to improving skills. In the process of playing with an opponent who was trained by other coaches and other methods, you can determine all the shortcomings. Subsequently, this allows you to become a step higher and win cups at world championships.

The women’s national team held its last competition in 2020 in February in New Zealand. After this tournament, the team did not go anywhere. This greatly affected the game and the state of the players. Therefore, the main goal of the camp was to restore and maintain physical fitness at a high level. Only so was the chance to reach the 2021 Olympics and count on the highest award.

All the girls made a lot of efforts to return to the usual sports regime. All these months of the coach put great emphasis on training in the hall. The team trained a lot on the field. During this time, players were able to carefully study each other’s game. This was an important stage on the road to team cohesion. For several months they sorted out mistakes and improved the game. To confirm the success of the results, training was conducted with the youth men’s team. These pieces of training allowed to apply new knowledge in practice. The national team and the coach made every possible effort to create a strong base for preparing for the Olympic Games.

However, it will be possible to understand what work remains to be done only at the beginning of 2021. It was at this time that matches between the teams should resume. According to the results of these competitions, the coaching staff will plan training for all months before the Olympics to eliminate all problems. These games will become indicative not only for coaches but also for players. Hockey players need to see the result and understand what needs to be fixed to lead the team to victory.

Hockey players worked hard these four months. The whole team was completely isolated from the outside world. They were forbidden to see their family. So now they have a short break when they can go home. This is also an important part of the training plan because during the training camp everyone was tired and wanted to meet with relatives. The coach understands that the psychological health of the players is no less important than physical. But to prevent infection, a set of rules was drawn up that should be followed when travelling home. These rules will allow players to spend good time with loved ones and after returning to training without any obstacles. A training and nutrition plan was also drawn up for each hockey player. It was necessary that, even in such a short period, the athletes did not lose tone.

The head coach noted that the whole team was very responsible for training. It was a difficult stage in their sports career, however, despite the isolation and heavy load, everyone tried to remain positive and comply with all the instructions of the coaches.

The result of good training of the coaching staff and a clear action plan was the personal achievements of each player in training. The important thing is that the hockey board does everything possible for a comfortable stay of athletes on the base. This is an important detail on the way to Olympic gold.