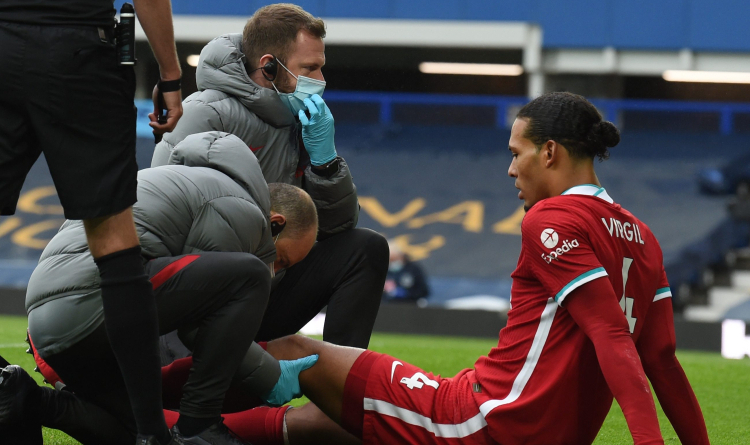 Reds fans’ worst-case scenario has started to come true as the club’s official site released the statement on Virgil van Dijk’s injury. The report suggests that Saturday’s clash against Everton could have been the final one for him this season.

How will Klopp’s men cope without their defensive leader?

Liverpool’s defender had to be subbed off following a horrendous tackle by Toffees keeper Jordan Pickford at the very beginning of 2-2 Merseyside derby draw at Goodison Park. The 29-year-old Dutchman was sent for a hospital scan and later on, was pictured leaving the building on crutches.

“Liverpool FC can confirm Virgil van Dijk will undergo surgery on the knee injury he sustained during Saturday’s 2-2 draw at Everton. The centre-back damaged knee ligaments following an incident involving Blues goalkeeper Jordan Pickford after six minutes at Goodison Park. No specific timescale is being placed upon his return to action at this stage.

Following surgery, Van Dijk will begin a rehabilitation programme with the club’s medical team to enable him to reach full fitness as soon as possible”

Although the length of van Dijk’s recovery remains unclear, he is expected to be sidelined for seven to eight months. According to Daily Mail, Bein Sports presenter Richard Keys claimed that Liverpool’s talismanic defender is unlikely to get back on the pitch in 2019-20 season.

The absence of 2019 UEFA and PFA Player of the Year is going to be a headache for Klopp, whose title-defending side are currently third in the Premier League table.

Joe Gomez and Joel Matip will now be Klopp’s first-choice centre-back duo. Remarkably, they have never started a match together at centre-back. Most likely, that will change on 21st of October, when Liverpool will face Ajax in the opening Champions League game.