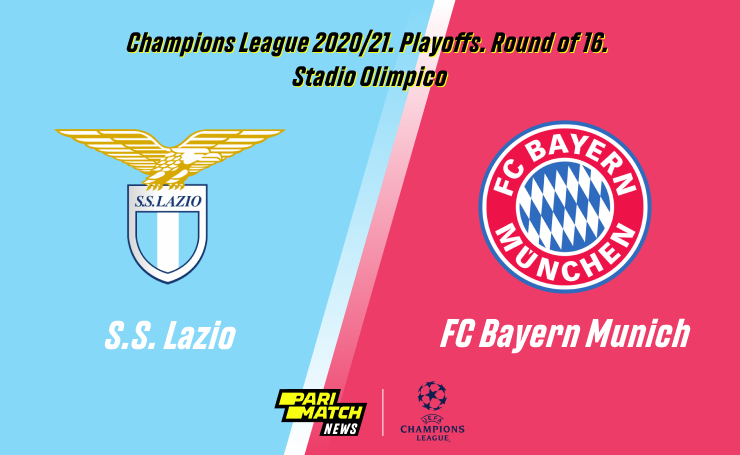 The Champions League 1/8 finals fixture between Lazio and Bayern will take place on 24 February, 1:30 IST. The first-leg match will be played in Rome at Stadio Olimpico without spectators.

Hansi Flick’s German machine will fly to Italy to try and gain a decent lead before the return leg. And it won’t be easy, as Bayern are having some difficulties at the moment, the recent defeat to Eintracht and injuries will definitely create challenges.

Lazio, on the other hand, play on their home ground and have won nine of eleven games this year. The Italian team will definitely put up a good fight against the Germans, and it promises to be an interesting match.

Leaving aside the defeats to Inter (1-3) and Atalanta (2-3), the team’s performance is quite commendable, as Lazio have won nine games this year in 11 games.

In the Champions League, the Romans had a difficult time, finishing second and coming away with 10 points. In total, the Eagles have collected 2 wins and 4 draws in the group stage.

The Bavarians are not showing much confidence at the moment. After winning the Club World Cup, where the team beat Al Ahli (2-0) and Tigres (1-0), there were two difficult matches in the Bundesliga.

Bayern lost 1-2 to Eintracht and drew 3-3 with Arminia, which is 16th in the league (lads from Munich made a comeback from 0-2). Earlier they thrashed Hoffenheim 4-1 and Schalke 4-0, and also beat Hertha 1-0.

It is worth noticing that Bayern are the winners of last year’s Champions League. This year, they qualified from first place in the group with five wins and a draw.

Douglas Costa and Corentin Tolisso are listed as injured. Pavard and Thomas Muller are also out with the coronavirus. Serge Gnabry has missed the last two matches.

Lazio have never faced Bayern Munich in a competitive game before this tie, and will look to start off with an upset against the Bavarians.

Statistical preview of the match Lazio vs Bayern Munich:

Bayern may have been nigh-on unstoppable in the group stages, but the absence of key man coupled with fatigue following the Club World Cup could see Lazio earn a first leg advantage on Tuesday night. Also, Lazio have lost just two of their last 10 competitive matches, winning the other eight, and have been exceptional at the Olimpico since the end of 2020. Indeed, head coach Simone Inzaghi has masterminded seven successive victories in Rome.

Still, the holders of the trophy know how to win important matches and will do everything they can to come away with a win. We expect a tough game and a final score of 1-2.