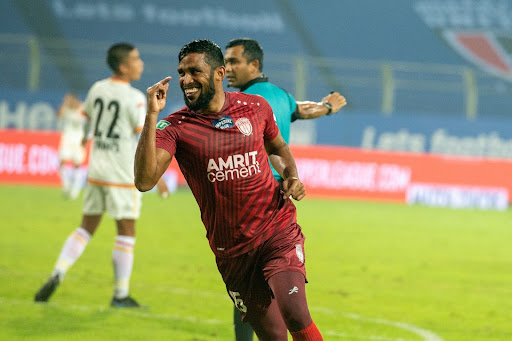 VP Suhair was on red hot form against East Bengal

VP Suhair and Patrick Flottman scored in the second half as NorthEast United registered their second win of the league campaign at the expense of East Bengal in Match 32 of the 2021-22 Indian Super League season at the Fatorda Stadium.

Khalid Jamil’s hands were forced to make a last-minute change in the heart of the defense as Hernan Santana was replaced by Jestin George due to an injury. Elsewhere, the Indian head coach decided to make 6 more changes to his side after the 5-1 defeat to Hyderabad. Mirshad Michu, Provat Lakra, Gurjinder Kumar, Khassa Camara, Rochharzela, and Mapuia replaced Subhasish Roy Chowdhury, Joe Zoherliana, Todonba Singh, Mohammed Irshad, Pragyan Gogoi, and Laldanmawia Ralte.

East Bengal started the game on a bright note mounting constant pressure on NorthEast United from the word go. Arshad was called into action as early as in the third minute when he had to parry away a Mohammad Rafique curler onto the far post after an East Bengal corner. Naorem Mahesh Singh and Antonio Perosevic caused some initial trouble for Jamil’s side with decent crosses from the left.

NorthEast United’s stand-in goalkeeper Michu looked shaky throughout the first half. The Southpaw misjudged a wobbling long ball and allowed Perosevic to have a free run at an empty net but the referee blew the whistle to flag a goal-kick for NorthEast United, thus saving the blushes of the former East Bengal custodian.

The goalkeeper gave away the ball cheaply yet again at the cusp of half-time scuffing his clearance and the ball fell to Antonio Perosevic who hurried his shot allowing Michu to keep the scores goalless in the 45th minute.

Daniel Chima Chukwu got a similar chance to score past the 27-year old goalkeeper as the Highlanders failed to clear their lines off the earlier Perosevic attempt. The Nigerian failed to sort his feet out and he made an important save as the two teams went with a goalless scoreline on the board at half-time. 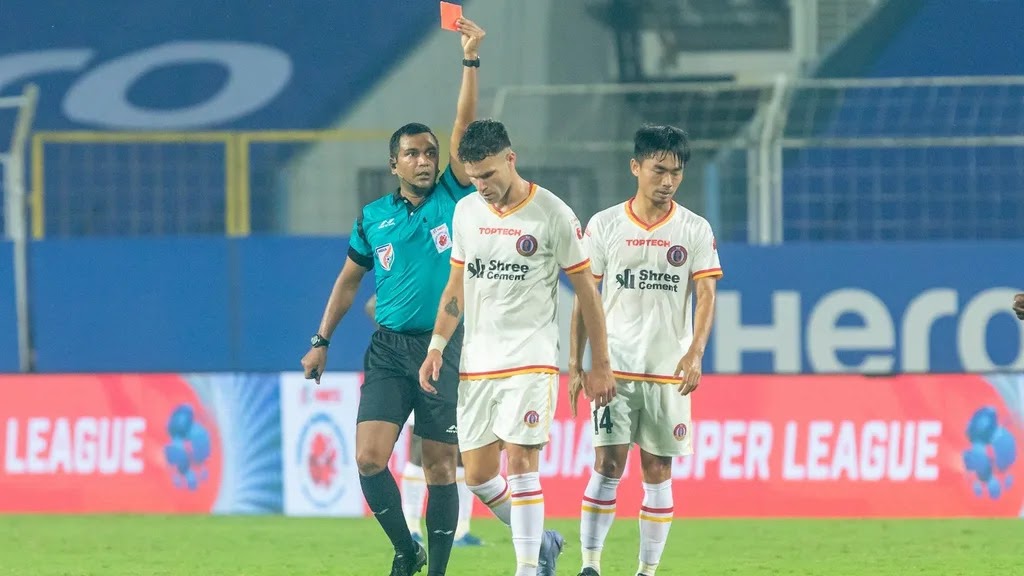 NorthEast United looked like a different side in the second 45 minutes as they contained the entire East Bengal team with constant shots at goal in the first few minutes. The Highlanders finally got their reward for constantly piling pressure on the Red and Gold Brigade as VP Suhair opened the scoring in the 60th minute. The former East Bengal striker received a low cross from substitute Laldanmawia Ralte after Matheus Coureur latched onto a loose pass and slotted the ball past Bhattacharja at his near post to make it 1-0.

Suhair was on top form for the rest of the game as he set up Mapuia for a goal with a defense-splitting pass but the Mizo striker hit it straight at the East Bengal goalkeeper in the 62nd minute.

Despite NorthEast United’s profound confidence in the attacking areas, Michu continued to appear shaky at the back. He was put in a one-on-one situation with Chima Chukwu in the 65th minute and somehow managed to deny the Nigerian a go at the goal.

Jamil’s team doubled their lead when Patrick Flottman scored his first-ever senior career goal after he connected a header off a lofted delivery from Imran Khan inside the East Bengal box in the 68th minute.

Coureur, Gurjinder, and Camara had a few snapshots at goal from distance in the final few minutes of the game but to no avail, as the Highlanders failed to increase their lead. Things went from bad to worse for East Bengal just before the full-time whistle as Antonio Perosevic was sent off by the referee after the Croatian winger got into a silly altercation with the referee himself.

East Bengal was out of sorts in the second half and never really looked comfortable with the ball as NorthEast United ran out 2-0 winners. The Red and Golds stay rooted at the bottom of the standings while the Highlanders climb to the 7th position with 7 points from 7 matches.

East Bengal continues to hunt for their first three points of the season as they face Hyderabad on Thursday while NorthEast United faces ATK Mohun Bagan in a rematch of the 2020-21 ISL semi-final on Tuesday.