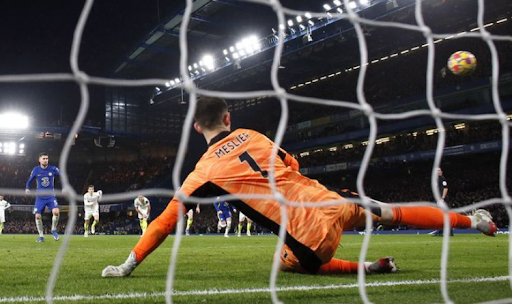 On December 11, all the representatives of England in the Champions League played in the 16th English Premier League tour. Chelsea, Liverpool and both Manchester sides won with one goal margin, and the winning goals were netted at the end of the match. Moreover, the validity of all four penalties raises mild doubts.

It all started with Man City‘s game against Wolverhampton. City controlled the game well, combining and creating chances, but missing chances because of the absence of a classy centre-forward. Even with Raul Jimenez‘s blundering sending-off, Wolverhampton kept the score at 0-0. But City scored the winning goal with a penalty awarded for Joao Moutinho‘s hand.

“A penalty? I don’t think it should have been awarded. The referee saw the hand and the rules say he increases the body area in this way. But the ball hit here [he pointed to his armpit].”

His words were further complemented by Wolves captain Conor Coady:

“It’s not a penalty. I treat referees well and I’ve never had a bad word to say about them but sometimes you can tell by the reaction that the penalty is questionable. When the fate of a game of this intensity is decided by a controversial episode, it’s very disappointing.”

Saturday’s programme continued with a match at lovely and loud Anfield, where Steven Gerrard made his return as Aston Villa’s coach. Liverpool, after setting an all-English record (17 consecutive matches in which the team has scored at least twice), are scoring less. Before that, to the same Wolverhampton, they scored the only goal in the 94th minute, in the match against Aston Villa, the Scousers were also limited to one goal – now it was a penalty kick.

“Liverpool played better, their style of play was better, but in the end, the match was decided on a penalty. There were two penalties, Liverpool got one and we didn’t. If Danny Ings had touched GK it would have been a foul. But I don’t understand, Alisson touched Ings, why is that not a penalty?! The penalty into our goal was strange too, Salah fouled first in my opinion.”

Don`t miss out 👉: You will never hear me say Aston Villa job is a ‘stepping stone’ to managing Liverpool – Steven Gerrard

“I think it was not easy for Tyrone Mings to avoid the situation that led to the penalty. I thought there was a penalty in Robertson’s case as well, but I didn’t see the replay.”

Leeds United and Chelsea produced a more intense game: a five-goal thriller. Lads from West Yorkshire showed attractive football to contest for a draw until the last minute, and suddenly, in the stoppage time of the second half, the Londoners were awarded a penalty, the second one in the match! Very disappointing for the club from the bottom of the table which deserved a least a point, the valuable one considering their situation.

The atmosphere was so electric that after the whistle a scuffle broke out involving as many as 16 people, but it did not come to a serious showdown with fists and suspensions.

“It was a game we deserved to draw and we lost it when it was finishing, we didn’t deserve to lose in a game like that. That increases the disappointment. We were very productive, we are very often scolded for our style of play, but we will continue in the same manner.”

Marcelo Bielsa said after the match.

“We needed this win desperately, for the belief, for the mood and for the atmosphere. I’m very happy with how we got it, how we played. Now we have two days off and it creates a good feeling for the boys.”

said Tuchel, who also insisted neither team’s players overstepped the mark as tempers frayed after the final whistle.

Saturday’s last match in the EPL was Norwich, a desperately struggling side fighting for survival and Manchester United, which seem to be coming out of a depression. And here the only goal was similarly scored from the 11 metre mark.  It’s easy to guess who earned it, even easier to guess who converted it. Of course, experienced in-form Cristiano Ronaldo took advantage of the inexperience of 21-year-old Max Aarons and after that easily netted.

Norwich coach Dean Smith explained his interpretation of the episode:

“Did Aarons make contact with him? Yes. Did he raise his hand? Yes. But I can show you five or six similar moments in the game, whether it was in the box or not. In them the referee didn’t record anything. We want consistency. There was none today, the referee was too easy on Manchester United.”

What’s more, another Champions League zone contender Leicester City also opened the scoring thanks to a penalty: making his first Premier League start since 7 November following a calf injury, Youri Tielemans converted a 38th-minute penalty after Jamaal Lascelles was adjudged to have brought down James Maddison.

There is less debate about the unfairness of the penalty decision here, as the result of the match proved to be quite legitimate, as the Foxes simply crushed Newcastle United 4-0 to win.

“When you see it live you fear the worst but when you see it in detail you see the player is going over before contact is made. For me, it’s not a penalty. The goal came at a bad moment for us when we were on top. Definitely, match officials should use VAR more. It’s what it’s there for. I don’t understand why referees are so reluctant. I think if he does, he reverses the decision.”

The table of the world’s premier football tournament now looks like this:

Don`t miss out 👉: Revealing Teams Qualified For The Knockout Stage