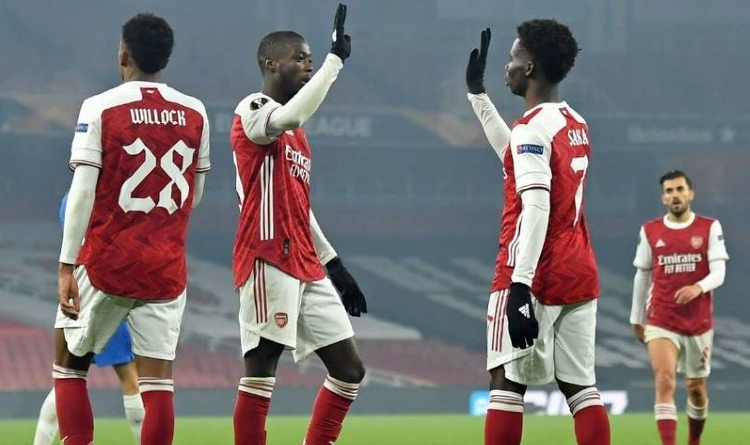 Tottenham were merciless to Ludogorets during their 3-1 win in Bulgaria. Harry Kane’s early header brought up his 200th Lilywhites goal in 300 matches across all tournaments, eight goals behind second-place Bobby Smith and 66 behind record-holder Jimmy Greaves.

The England international has started his first-ever match alongside Gareth Bale, who returned to Spurs on a season-long loan from Real Madrid. 31-year-old Welsh spent 65 minutes on the pitch before being subbed.

The second goal was made by Lucas Moura 19 minutes following Kane’s history-making goal. The Brazilian was subbed in the second half to allow Son Heung-Min to assist Giovanni Lo Celso just 17 seconds after being on the pitch.

Jose Mourinho’s side tops Group J table on six points, being equal with Antwerp (Belgium) and LASK (Austria), yet better in terms of goal difference. In Sunday’s Premier League fixture, Spurs will play away against West Brom.

The Gooners won 4-1 over Molde in their Group B game thanks to two Norwegian side’s own goals as well as goals scored by Nicolas Pepe and Joseph Willock.

Despite their convincing result, Arteta’s men conceded first at the halfway of the first half and were goalless until its very end. Arsenal could have levelled immediately as Eddie Nketiah’s goal looked utterly legal. However, it was ruled out by referee Halil Meler for offside.

In his interview after the match at Emirates, Mikel Arteta complained about the absence of VAR in the Europa League group stage:

‘I don’t understand it, I don’t think it makes any sense when we have the technology and we all believe it’s the right call for everybody to do it. So I don’t understand. We were complaining with the ref because we were told that [Eddie Nketiah] was clearly onside and obviously it’s a situation that can change the game. I think it’s something that they have to look at and, if possible, change it’,

The Nigeria international has been involved in five goals in his two Europa League starts this season. Two weeks earlier, he completed a 2+1 stat against Ukrainian side Zorya.

Leicester scored four goals in a single European elite competition match for the first time in 59 years. Remarkably, their previous record was set in their debut in Europe against Glenavon in the Cup Winners’ Cup.

Brendan Rogers’ side, currently second in the Premier League table, will now focus on Sunday’s encounter against Wolves.