The World Cup dream of underdogs North Macedonia ends here as Portugal booked the last remaining seat to Qatar. The Portuguese playmaker Bruno Fernandes registered his name on the scoresheet twice while Cristiano Ronaldo and Diogo Jota also bagged an assist at Porto’s Estádio do Dragão on Wednesday.

It was a Do-or-Die game for both sides hence the managers also made a few changes in their lineup from their fixture. Portuguese gaffer Fernando Santos retained the same midfield and forward line but went on to restructure the defensive line with three major changes. As Cancelo, Pepe and Nuno Mendes replaced Dalot, Fonte and Guerreiro who were part of the Portuguese line in a victory over Turkey. On the other hand, Blagoja Milevski changed the formation from the historic triumph over European giants Italy and opted for a three-at-back approach.

Portuguese captain Cristiano Ronaldo missed a golden chance to open the scoreline in the 12th when only goalkeeper Stole Dimitrievski was upfront but he failed to keep the shot on target. Although the legendary forward then went on to assist his Manchester United teammate Bruno broke the deadlock in the 32nd minute. While barging into the ‘D’ box, Ronaldo was surrounded by a bunch of chasing defenders but Bruno’s run went unnoticed and the 37-year-old icon didn’t hesitate a bit to let Fernandes take the shot. 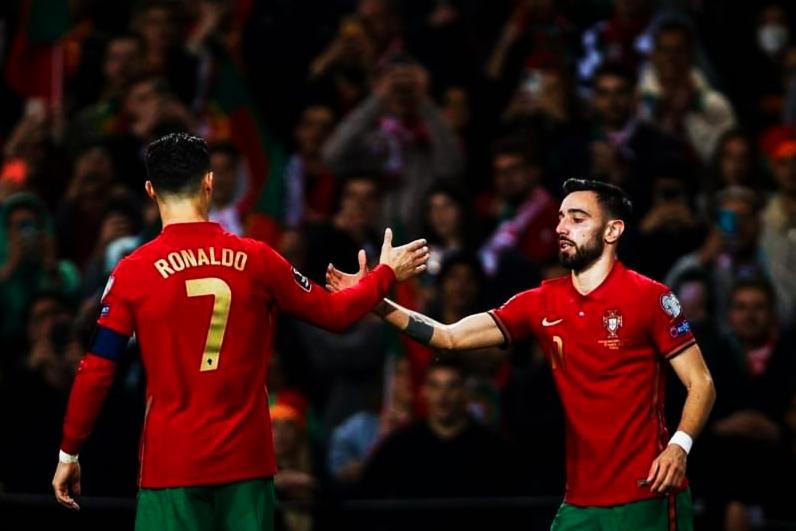 The Manchester United magic in the national colors

The first half ended on a 1-0 scoreline in favour of the home team who attempted a whopping number of six shots before the halftime whistle. The fierce approach of Portugal turned into mild in the second half as per Fernando Santos who instructed his side to focus on the lead protection.

Then in the 65th minute, Liverpool star Diogo Jota set up another scoring opportunity for Bruno who just couldn’t do anything wrong that night. He outsmarted the defensive line to receive a long pass from Jota and took no time to deliver it in the right corner of the goal. The aesthetic goal gave a sense of assurance to the Portuguese camp that the World Cup qualification was not far away from there.

When the final whistle from referee Anthony Taylor was blown, the Portuguese gaffer raised his hand to wave toward the home crowd as an announcement that the navigators had done it. Fernando Santos and his boys have dodged every bullet coming their way to finally reach the World Cup roster.

Takeaways from the clash

After knocking the Euro champions Italy in the previous fixture, North Macedonia has failed to replicate their feat against another European giant. The Macedonian lions only attempted three shots throughout the game while none of them ended up on target. Their tally of 258 passes was only around half of Portugal’s completion total of 508 passes. Despite the losing outcome, the 27-year-old North Macedonian central defender Visar Musliu was able to put on another decent performance.

Statistically, Portugal outclassed the opponents in every aspect of the game. They created 12 chances while successfully converting two of them and kept 65% possession of the game.

Portuguese magnífico Bruno Fernandes turned up on the big night when his nation needed him the most. Apart from scoring two goals, the 27-year-old red devil fetched the incredible numbers of 5 shots, 4 created chances, 47 accurate passes and 4 duels won. The 19-year-old teenage sensation Nuno Mendes also garnered the spotlight owing to his remarkable prowess on the left flank of the defensive line.

Portugal has participated in every FIFA World Cup edition of the 21st century and this victory has ensured that the appearance record is now out of danger. On the other hand, 67th ranked North Macedonia who made their Euro debut in the latest edition just fell short of the nation’s first-ever World Cup appearance.

Fernando Santos’ side seems like an overpowering side on paper due to the heavy star power of the squad. They will be starting as dark horses aiming to replicate the 2016 Euro triumph on the global stage to give a befitting send-off to Cristiano who may appear in the World Cup for the final time.