Odisha defeated SC East Bengal by a 6-4 margin in ‘Match 13’ of the 2021-22 Indian Super League season to join ATK Mohun Bagan at the top of the points table.

Spaniards Hector Rodas and Aridai Cabrera scored a brace each with Javi Hernandez and Isak Vanlalruatfela netting the other two goals for the Juggernauts.  For the Red and Golds, who remain at tenth place, Daniel Chima Chukwu scored a quick brace while Semboi Haokip and Darren Sidoel got one goal each.

East Bengal manager Manolo Diaz made three changes to his starting XI from the defeat against ATK Mohun Bagan as Lalrinliana Hnamte, Tomislav Mrcela, and the injured Arindam Bhattacharya made way for Amir Dervisevic, Hira Mondal, Suvam Sen respectively. On the other hand, Kiko Ramirez made only a single tweak to the team that defeated Bengaluru 3-1 in their season opener replacing Jonathas with Malaysian midfielder Liridon Krasniqi.

The game had a sedate start with the likes of Mohammed Rafique and Darren Sideol helping the Torchbearers control the tempo albeit without any productive penetration in Odisha’s half. East Bengal got a half-chance in the 12th minute when Dervisevic whipped in a threatening free-kick but Odisha keeper Kamaljit Singh parried it to safety.

A minute later, however, he was left glued to his position as he saw East Bengal taking a lead via a long throw by Raju Gaikwad. The dangerous ball was cleared by Victor Mongil but only to Sidoel who rocketed his strike into the top right corner.

Odisha responded well and put pressure on the opposition as quick feet and a few tricks helped Jerry Mawihmingthanga get past Mondal down the right flank and put in a good ball for Nandhakumar Sekar who failed to trouble the Red and Golds keeper Sen from a close distance.

In the 34th minute, Hernandez, known for his sheer quality from set-pieces, put in a perfect freekick into the East Bengal box finding his Spanish compatriot Rodas unmarked and he had no problems in heading it past the stranded Sen. 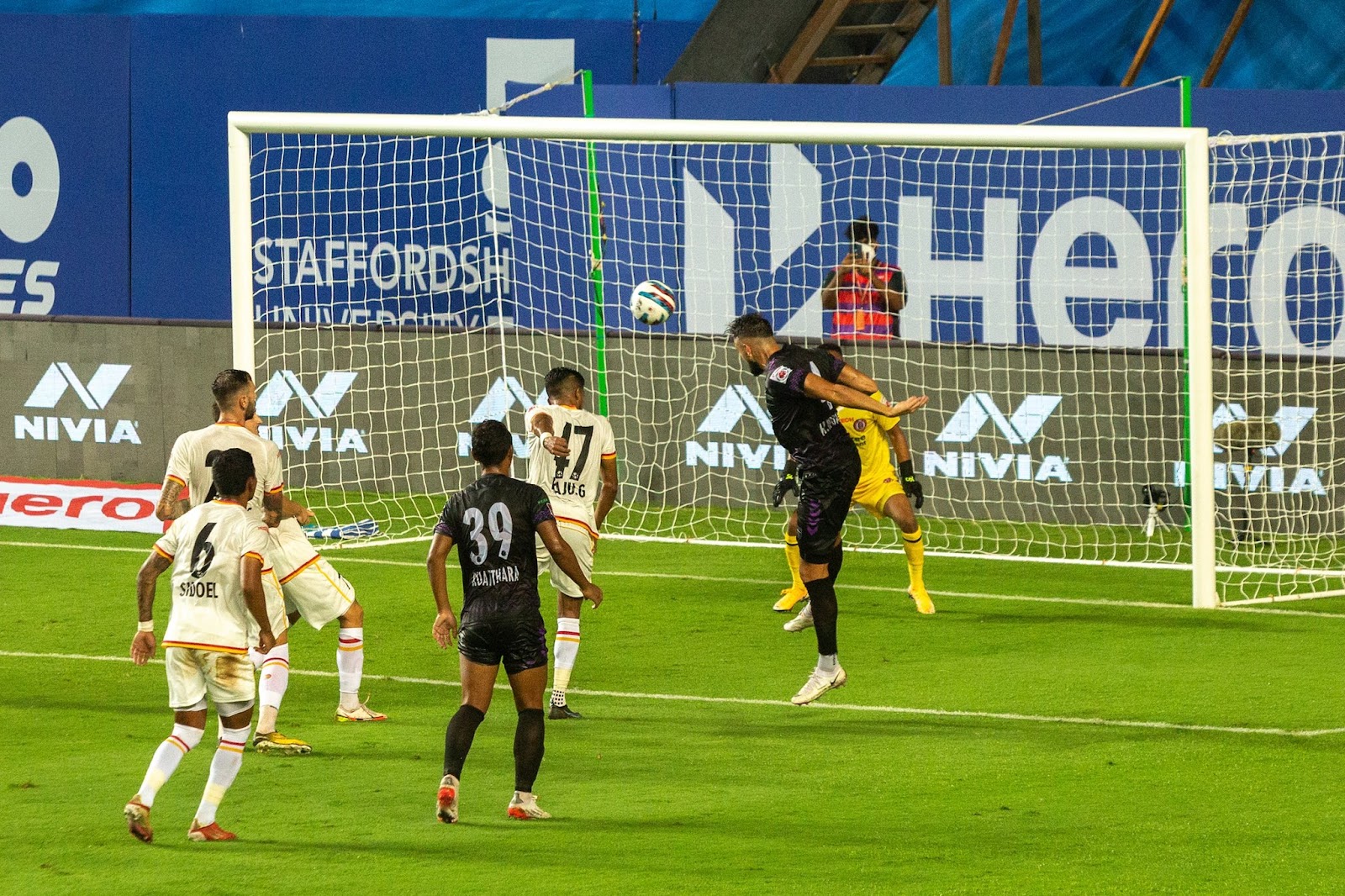 Hector Rodas scores his second goal of the evening

Six minutes later, in another set-piece routine, Hernandez whipped in another sublime cross from the left corner and Rodas managed to get his head to it once again helping the former ATK midfielder reach the milestone of 50 ISL assists.

Having played a supporting role in the first two goals, Hernandez was through on goal after a defense-splitting through ball from Mawihmingthanga but the Spanish midfielder failed to keep his shot on target.

Odisha scored from another corner routine making it 3-1 in the 45th minute but on this occasion, it was a solo show from Hernandez as his corner spectacularly found the back of the net leaving Sen and the entire East Bengal team rooted to their spots.

With a two-goal advantage in the bag, Ramirez took his key players in Hernandez, Mongil, and Thoiba Singh off in the second half. Meanwhile, Diaz also played his cards by bringing in Tomislav Mrcela, Amarjit Singh Kiyam, Semboi Haokip, and Daniel Chima Chukwu.

The initial stages of the second half lacked clear-cut opportunities but substitute Aridai Cabrera produced another moment of magic as he curled in a free-kick past the diving Sen to make it 4-1 in the 71st minute. 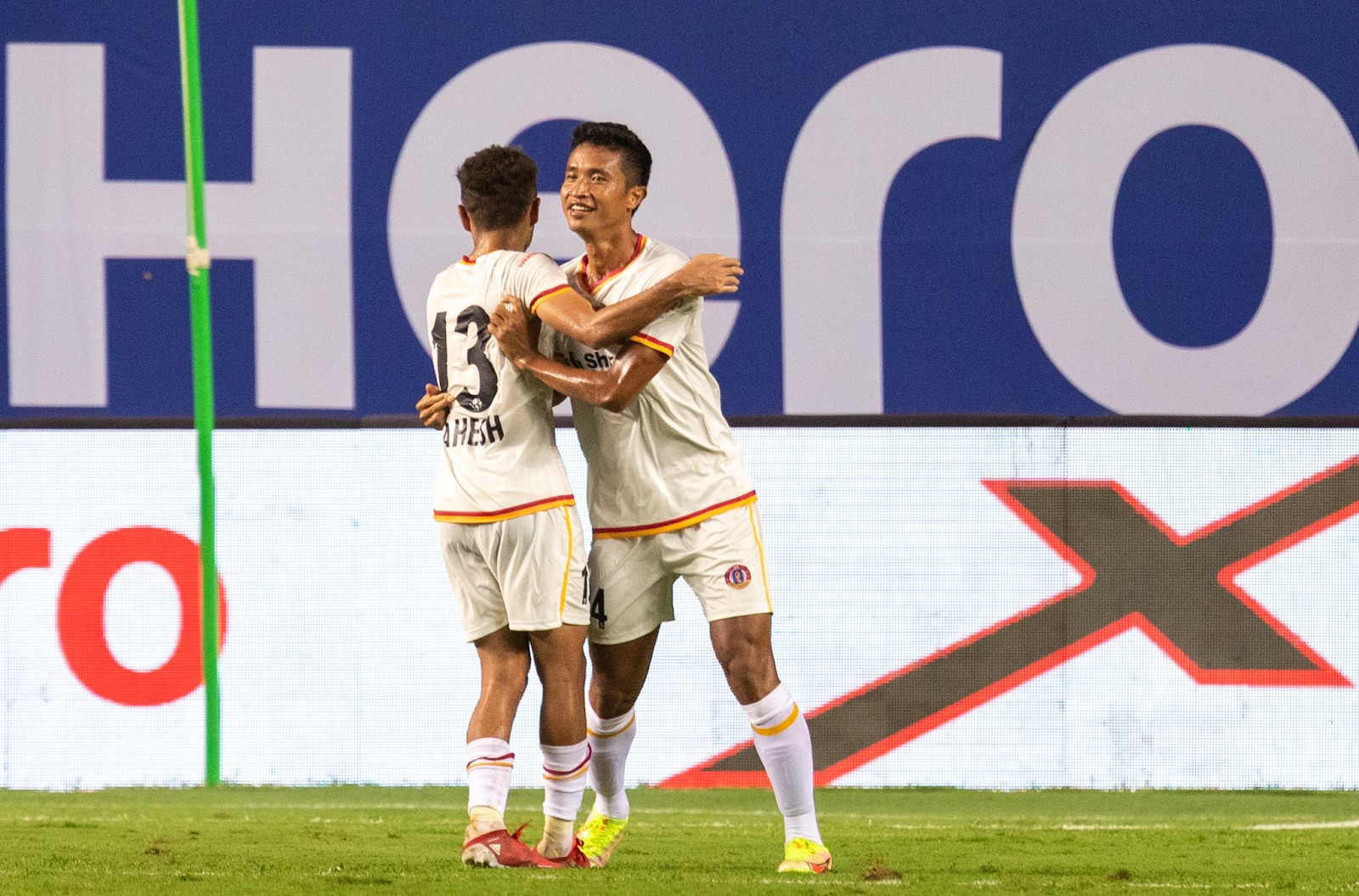 Semboi Haokip pulled a goal back for SC East Bengal

Semboi Haokip latched onto a precise cross and headed the ball past Kamaljit Singh pulling a goal back for East Bengal in the 80th minute. The Juggernauts restored their three-goal lead just a couple of minutes later, Isak Vanlalruatfela’s venomous strike proved to be too powerful for the East Bengal custodian.

Many would have expected it to be the last notable action of the game but the fans were in for a frantic period of football during the last ten minutes. At the stroke of the 90th minute, Chima pulled a goal back for the Red and Golds by planting his powerful drive past the Odisha goalkeeper. The Nigerian striker earned a penalty less than 90 seconds later after a silly challenge from substitute Gaurav Bora and the former Molde frontman converted from the penalty spot to miraculously make the scoreline 5-4.

Having found a shimmer of hope after what seemed like ages, Diaz’s players went all guns blazing in the additional time in hopes of making it 5-5. The neutral fans were indeed gifted with the 10th goal of the night but East Bengal ended up on the receiving end as Jonathas back-heeled the ball in the path of Cabrera who completed his brace on the night.

Ramirez’s men will now take on another struggling team in Kerala Blasters on Sunday and will be aiming for the top spot while Diaz’s boys will face a high-flying Chennaiyin team on Friday after a short break.