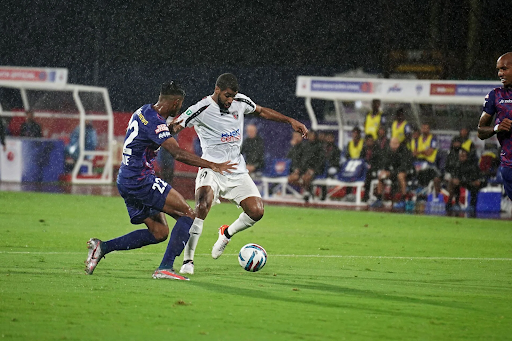 Bengaluru will be aiming to get back to winning ways

NorthEast United and Bengaluru will clash in ‘Match 94’ of the 2021-22 Indian Super League season at the Fatorda Stadium on Friday. Time is running out for Bengaluru to enter the playoff places in the league standings while NorthEast United will be playing to save them from further humiliation.

Bengaluru was not being considered a contender for the semi-final places after their poor start, but they have turned things around in the second half of the competition. That being said, the Blues are still struggling at sixth place in the standings having accumulated 23 points from 16 matches.

On the other hand, NorthEast United might have started planning for next season since their ongoing campaign is as good as over. The Highlanders are placed at the very bottom of the standings, with 10 points to their name from 17 matches.

Bengaluru’s unbeaten streak of nine games came to an end in the last match as Hyderabad handed them a 2-1 defeat. However, Marco Pezzaiuouli’s team registered consecutive wins before taking on the Nizams.

They won 3-1 against Jamshedpur, courtesy of a Cleiton Silva brace, while the scoreline read 1-0 against Kerala Blasters. Roshan Naorem was on target for the Blues in the Southern Derby.

Confidence will inevitably be very low in the NorthEast United camp as they are the only team to have lost all of their last three matches. Khalid Jamil’s men suffered a 3-1 defeat in their last match against ATK Mohun Bagan.

A 10-man Kerala Blasters team got the better of them by a 2-1 margin in the previous match, while the Highlanders were also at the receiving end of a 5-0 humbling by league leaders Hyderabad.

The head-to-head records are heavily skewed in Bengaluru’s favor as they have won six of the 11 meetings against NorthEast United. Four matches have ended in stalemates while the Highlanders have had the last laugh on only one occasion.

The first meeting of this season produced a 4-2 scoreline in the Blues’ favor. Strikes from Cleiton Silva, Jayesh Rane, Prince Ibara, and a Mashoor Shereef own goal comprised Mumbai’s four goals, while Deshorn Brown and Matheus Coureur were on target for the Highlanders. 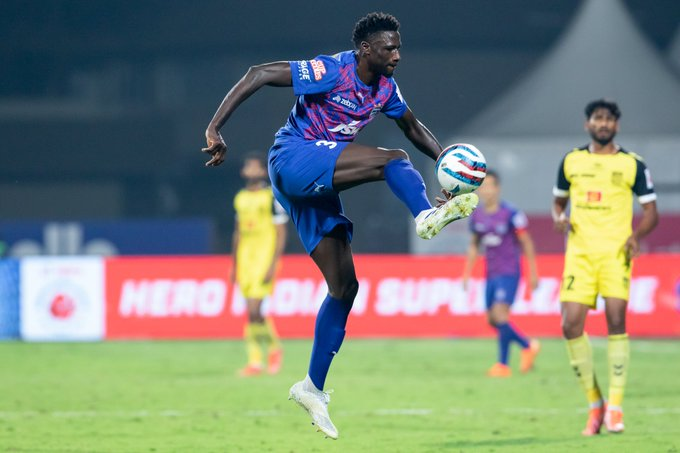 Yaya Banana could be handed his first start for Bengaluru

Jamil is likely to make three changes to his starting XI which lost 3-1 against ATK Mohun Bagan, one of them being a forced change. Left-back Gurjinder Kumar will be unavailable as he needs to serve a one-match suspension after picking up four yellow cards.

Joe Zoherliana could be deployed on the left flank in Gurjinder’s absence, while Provat Lakra can return to his right-back position. Besides that, Sehnaj Singh and Imran Khan could come in for Mohamed Irshad and Pragyan Gogoi respectively.

Like his NorthEast United counterpart, Pezzaiouli will also be forced to make at least one change to the team that lost against Hyderabad, as Roshan has been suspended for a match after accumulating seven yellow cards.

Parag Shrivas could be slotted in at Naorem’s vacant left-back slot, while youngster Namgyal Bhutia can be deployed on the right flank. Besides that, the new signing Yaya Banaya could replace Pratik Chaudhari at central defense, but the German tactician will then need to replace Ibara with Udanta Singh to maintain overseas count.

Both sides are coming on the back of a defeat from their respective last match but Bengaluru has been far better over the course of the season. Hence, we have predicted a 3-1 scoreline in favor of the Blues.