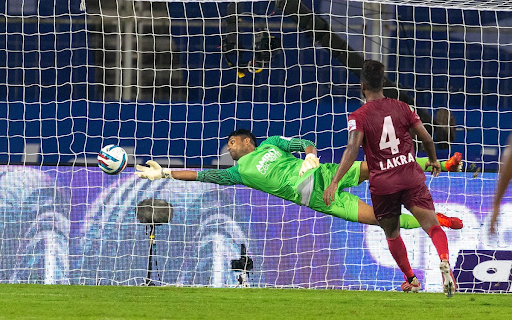 After 22 goals in 6 matches, the fans finally witnessed a goalless draw in the 2021-22 season of the Indian Super League as both NorthEast United and Kerala Blasters opened their points tally for the campaign.

Both teams started their season by conceding 4 goals against the opposition on the evening and the head coaches of both teams were forced to make changes in defense to avoid losing two matches in a row.

The Highlanders head coach Khalid Jamil fielded a new-look central defensive partnership with Patrick Flottmann making his ISL debut along with Hernan Santana moving to defense from midfield. Khassa Camara was the holding midfielder alongside two debutants in Mapuia and Pragyan Gogoi with Deshorn Brown preferred to Matheus Coureur in the attack.

On the other hand, the Tuskers manager Ivan Vukomanovic rung a few changes to the team that lost in the season opener against title favorites ATK Mohun Bagan. The head coach brought in Enes Sipovic for Alvaro Vazquez, Vincy Barreto came in for the injured Rahul KP, and Ayush Adhikari replaced Bijoy Varghese in the starting XI.

With both teams set up to predominantly defend and break on the counter, the game was scrappy from the first minute. The first quarter of the game produced all but one notable chance when Jorge Pereyra Diaz darted down the left flank but failed to spot the run of Barretto who was in acres of space on the opposite flank.

In the 36th minute, a lethargic Provat Lakra was closed down by the energetic Adrian Luna who found the Argentine striker through on goal but Dias tried to dribble past the defenders to open up a shot on his right foot and then dragged his effort wide. The Argentine could have taken the shot after the first touch and scored his second goal in India but instead ended up ruing the horrible miss.

In the 51st minute, Barretto made a darting run down the right flank and could have pulled the trigger himself but did well not to let adrenaline get the better of him and passed it to Sahal Abdul Samad, who had the goal gaping. Samad scored his second ISL goal in the recent fixture against ATK Mohun Bagan and was expected to bury an opportunity like that but dragged his effort wide failing to take his ISL career goal tally to 3. 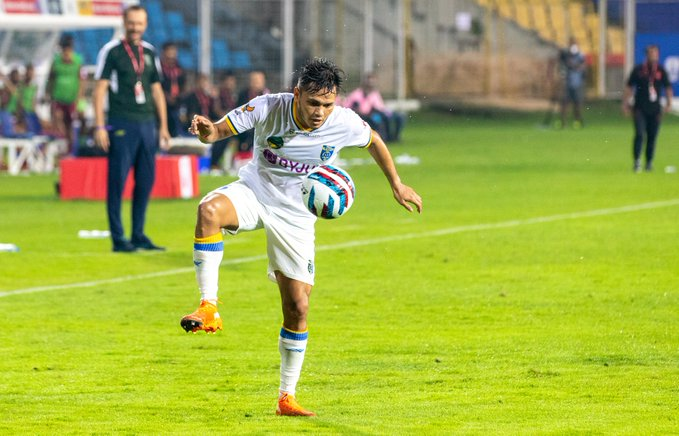 Though Jamil looked content with a point, Vukomanovic sensed an opportunity and went all guns blazing by bringing in Nishu Kumar and Alvaro Vazquez.

The Serbian tactician almost got his reward for quick thinking and perfect comprehension of the game in the 83rd minute. After coming on, Kumar floated in a dangerous ball in the Highlanders’ penalty area and Flottmann was caught napping but Vasquez was alert as a fox in the box. The star signing’s header was well directed but Roy Chowdhury came up with a fantastic save to maintain parity in the game and help his team take one point from the match.

The Blasters looked the brighter of the two teams on the evening but they need to be more clinical upfront if they want to hold on to any hopes of winning against Bengaluru on Sunday.

On the other hand, Jamil will hope to have Federico Gallego back soon as his team is crying out for some creativity in midfield ahead of their match against two-time champions Chennaiyin on Monday.