Noah, Guarrotxena propel Goa to a clinical 3-0 win over Jamshedpur

Goa dished out a clinical performance against Jamshedpur to kick off matchday 5 in style. The Gaurs comfortably won 3-0, thanks to early goals from Iker Guarrotxena, and Noah Sadaoui before Brison Fernandes put the icing on the cake.

From the get-go, Jamshedpur was in sixes and sevens as they conceded after just two minutes. A poor clearance from Eli Sabia saw the home side charge through on goal as they earned a corner. The hosts took it early as Edu Bedia curled in a beautiful cross which was deflected into Guarrotxena’s path by Redeem Tlang and the Spaniard didn’t miss from close range.

After just eight minutes Carlos Pena was handed a huge blow as Fares Arnaout had to be stretchered off due to an injury. Goa has been troubled by a few of those already, only last week they lost Marc Valiente to an injury and Fares became the latest casualty. It was quite evident from the fact that midfielder Glan Martins came on to slot into the defensive line.

That didn’t stop the home side from going two goals clear inside 12 minutes. Jitu Singh had his pocket picked and the ball was fed to Brandon Fernandes who played an inch-perfect through pass to Noah who finished calmly to send the Fatorda into raptures.

Noah had a chance of putting the game to bed as he was sent through on goal by Aibanbha Dohling but the Morrocan lost his footing and the chance went begging. The Red Miners were really stretched for the first half hour. Goa was able to stitch passes together and do so with ease.

There was a huge shout for a penalty shortly after the 30th-minute mark as Noah latched onto a long ball but Sabia pushed the forward down to the turf, although the referee didn’t feel it was worthy of a spot-kick.

Aidy Boothroyd’s side was creating chances but they just lacked that quality in the final pass. Laldinliana Renthlei curled in a good cross but Anwar Ali’s diving clearance got rid of the danger. Five minutes before the break, Seriton Fernandes’s awkward clearance had Daniel Chima Chukwu chasing the ball but the hosts were able to deal with the threat calmly.

Jamshedpur’s best chance of the night fell to Wellington Priori who latched onto a pass from Farukh Choudhary and unleashed an effort that Dheeraj Singh parried away, and after recycling the ball, Priori had another crack at the goal but could barely trouble the Goan keeper. 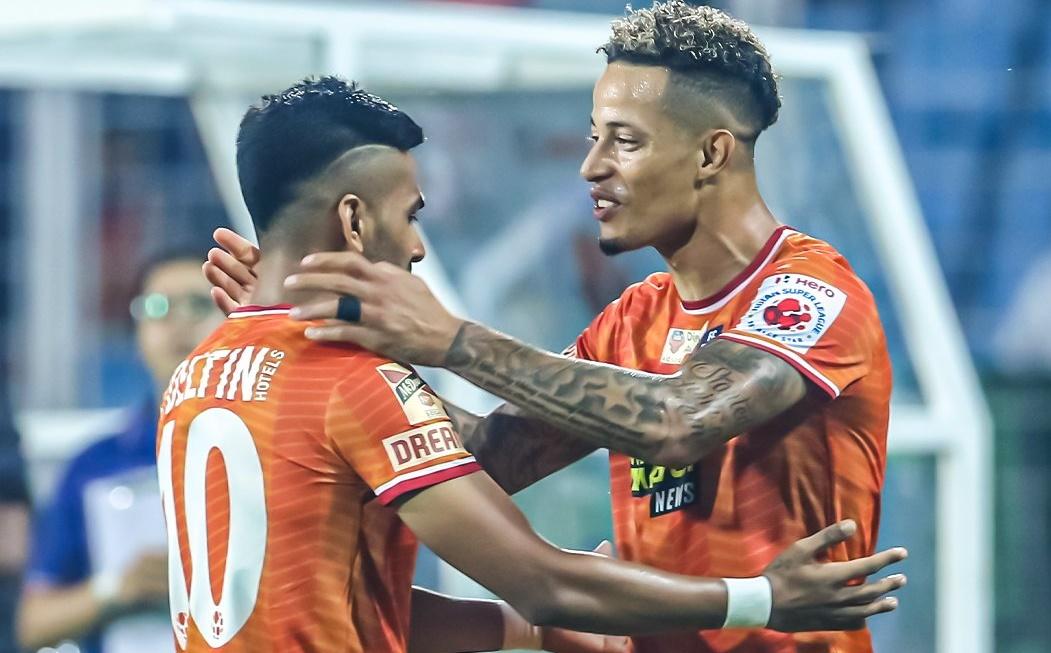 Shortly after, Anwar fed Noah with another delightful lobbed pass but Noah fluffed his effort. The 29-year-old was causing Boothroyd’s men all sorts of troubles as he again popped up on the left flank to deliver a cross which Redeem could only head down on the turf and off the crossbar.

The referee blew his whistle to bring the play to a halt and it was Pena’s side who had dominated the first half completely. The visitors made two changes as the second half kicked off, Harry Sawyer and Pratik Chaudhari replaced Sabia and Jitu.

The Gaurs began the second period just like they ended the first, dominating possession and recycling the ball well. Just ten minutes after the restart, Boothroyd made two more changes as Priori and Boris Thangjam were taken off to accommodate Jay Thomas and PC Laldinpuia.

Clearly, the Englishman wasn’t liking what he was seeing from his players. There was a comedy of errors near the hour mark, as Rehenesh TP gifted the ball to Guarrotxena but instead of finding his teammates, the Spaniard’s fluffed effort spared the Jamshedpur keeper’s blushes.

On the other end, Seriton’s clearance deflected onto the foot of Chukwu who failed to hit the target as Dheeraj came rushing out. Shortly after, Sawyer got onto the end of a corner kick but couldn’t direct his header towards the goal.

The second half saw plenty of stop-starts as Dheeraj and Anwar collided trying to clear the ball. Anwar was in the mix again as he was cautioned for hacking down Sawyer. There was another collision between Dheeraj and Sawyer later and it was the latter who ended up on the turf but it was a clean challenge.

Seven minutes were added to the regulation time and the hosts capped off a brilliant outing with a third goal in stoppage time. Brison Fernandes showed a good piece of skill and turn inside the box and drilled his effort past Rehenesh.