The change in coaching setup failed to bring in a change in NorthEast United’s fortunes as Vincenzo Alberto Annese started his stint with the new ISL club with a 7-3 loss against Chennaiyin courtesy of Nasser El Khayati’s hat-trick at the Indira Gandhi Athletic Stadium in Guwahati on Saturday.

NorthEast United made as many as six changes to the side that lost 2-1 to Odisha in their previous match. Forming the back four in front of goalkeeper Arindam Bhattacharja were Gaurav Bora, Mashoor Shereef, Michael Jakobsen, and Gurjinder Kumar. Aaron Evans formed the midfield trio alongside former Gokulam Kerala players Emil Benny and Jithin MS. Parthib Gogoi and Romain Philippoteaux attacked from the wings to support the lone striker Wilmar Jordan in a 4-3-2-1 formation.

Chennaiyin, on the other hand, made only two changes that lost 1-3 to Hyderabad. Mohammed Rafique replaced Ajith Kumar in the right-back position as the latter saw a red card in the previous match. Akash Sangwan, Gurmukh Singh, and Fallou Diagne partnered with him to form the back four shielding the goalkeeper Debjit Majumder.

Julius Duker and Edwin Vanspaul played as the two defensive midfielders in front of them. Rahim Ali replaced Vincy Barretto in the left wing as he was entrusted to cross the ball into the centre of the pitch alongside Prasanth K from the right wing. Nasser El Khayati played in the hold behind the lone striker Petar Sliskovic in a 4-2-3-1 formation. 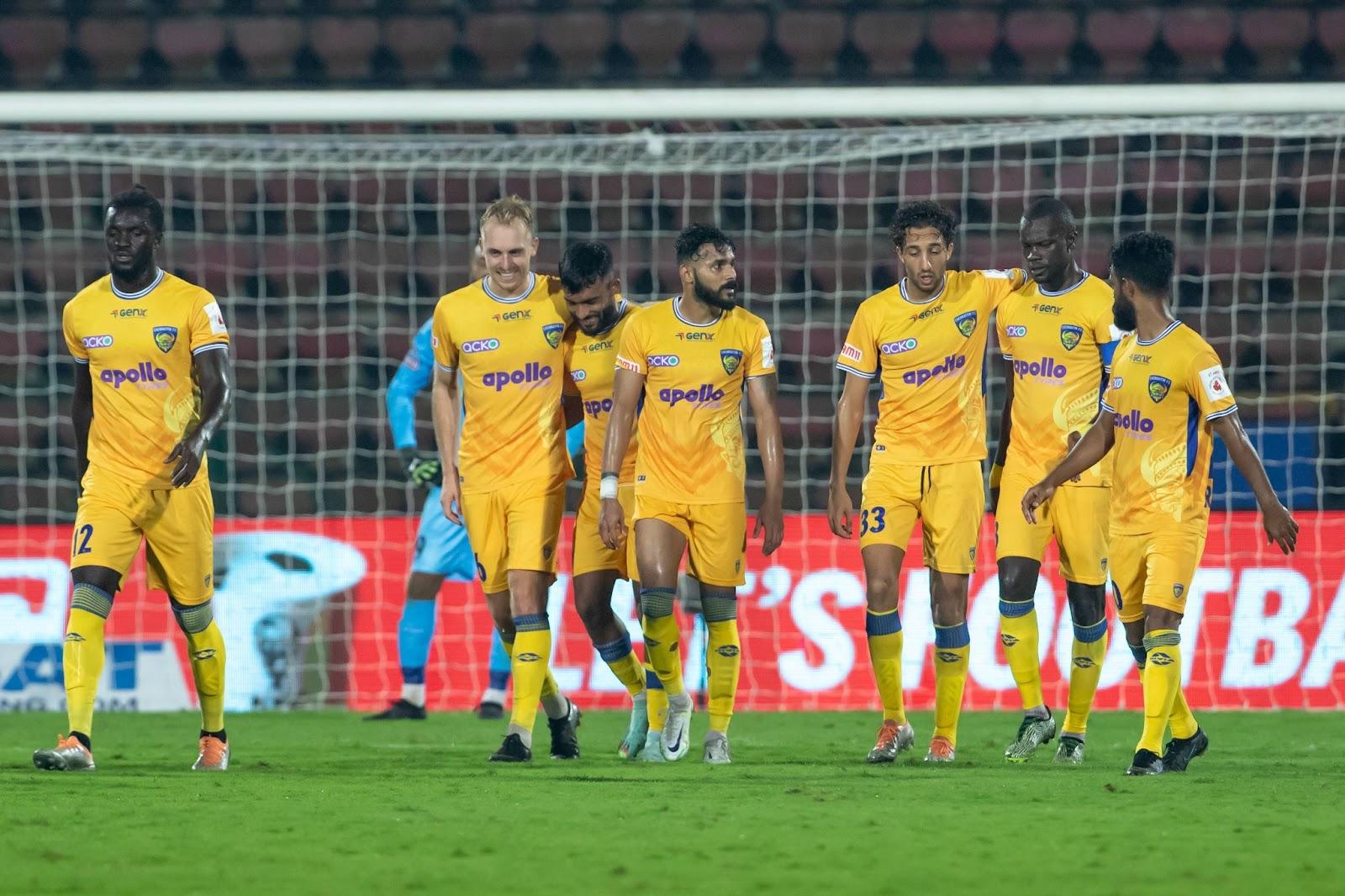 Chennaiyin had to wait only for eleven minutes to draw first blood as Prasanth fizzed past his mark before unleashing a low cross which El Khayati made no mistake in slotting home. However, the tables turned for Prasanth in the 36th minute when he miscued his clearance and the ball struck his arm inside the penalty box. Wilmar Jordan waited for Debjit to commit an early dive and slotted the ball through the middle to restore parity.

However, Chennaiyin regained their lead after four minutes as El Khayati dribbled past two players and dinked a curling shot through a host of bodies from outside the box which the diving Arindam had no answer to.

Akash Sangwan overlapped on the wings and delivered an inch-perfect cross to Sliskovic at the near post, who towered above his marker and thumped his header past the reach of the NorthEast United custodian at the dying embers of the first half.

El Khayati started from where he left in the 48th minute as he caught Arindam out of position and powered his dipping pile driver into the bottom corner. The combination between Sliskovic and El Khayati once again struck gold as the former headed the latter’s cross from the right flank in the 57th minute.

It was time for Julius Duker to find his name on the scoresheet in the 68th minute as he volleyed El Khayati’s free-kick into the side corner to leave NorthEast United defenders in disbelief. After Chennaiyin’s failed clearance off a corner kick, Romain Philippoteaux slammed the ball into the top corner in the 73rd minute to trim down the lead to four goals.

Joe Zoherliana miscued his clearance at the goal line as the ball struck the inner portion of his boot and rolled into the net in the 79th minute to reinstate Chennaiyin’s five-goal lead. Roccharzela scored a consolation goal in the last kick of the game as Debjit palmed Philippoteaux’s cut-back cross straight to his path and the youngster tapped in a simple one.

NorthEast United extended their losing streak to nine games following the defeat. With zero points in their kitty, they will be trying their best to shed the tag of the punching bag when they square off against Goa next Saturday away from home.

Chennaiyin has a gap of eight days before their next match as they host Kerala Blasters next Monday in an attempt to bridge the gap between them in the points table. Chennaiyin is seventh with 13 points from 9 games while the Blasters have 15 points from 8 games and are placed one spot above them. A couple of favorable results and the Marina Machans may find themselves in the reckoning of a playoff berth.