A first-half brace from Naorem Mahesh helped East Bengal break their jinx, as the Red and Golds handed Goa a 2-1 defeat in ‘Match 65’ of the 2021-22 Indian Super League season. Mahesh scored both goals for East Bengal while Alberto Noguera was on target for the Gaurs.

This was head coach Mario Rivera’s first game in charge in his second stint with the Kolkata-based team, and as many expected, the starting XI had quite a few chances. Croatian central defender Franjo Prce returned to the line-up whereas Ankit Mukherjee slotted in as left-back to replace Hira Mondal who was unavailable for this match. Dutch Midfielder Darren Sidoel also returned to the midfield replacing youngster Lalrinliana Hnamte.

Goa head coach Derrick Pereira also made two changes to the starting XI from the last game as Edu Bedia and Makan Chothe were handed starts in place of Princeton Rebello and the impressive Saviour Gama respectively.

The Gaurs hogged all the possession right from the early exchanges but the Red and Golds drew first blood in the 9th minute when a mistake from Bedia saw Mahesh claim possession in a very dangerous area. The youngster then showed nerves of steel to slot it past Dheeraj Singh in the Goa goal to hand his team the crucial lead.

Goa’s best chance of the first half came in the 24th minute when Noguera and Bedia combined effectively before the latter played a penetrative ball to Alexander Romario Jesuraj and the winger found himself in a fantastic position but he launched his shot into the stands.

However, Pereira’s men eventually found the back of the net thirteen minutes later through star forward Jorge Ortiz. After skipping past two defenders, the Spaniard delivered a defense-splitting ball for Noguera and though the angle was narrow, the midfielder thundered it past East Bengal custodian Arindam Bhattacharja to restore parity.

Goa could not celebrate for goal for long though as hardly five minutes after Noguera’s goal, Mahesh struck again. Like a true opportunist, the Manipuri midfielder was at the right place at the right time to intercept Anwar Ali’s mispass before he pulled the trigger. His shot struck the crossbar and the linesman concluded that the ricochet had crept inside the goal-line.

Rivera made a pragmatic change in the second half as he brought on Raju Gaikwad to strengthen his defense. The initial phases of the second half did not produce any clear-cut openings and perhaps the scuffle between Bedia and Sidoel was the only notable occurrence but both players were lucky to escape without a card. 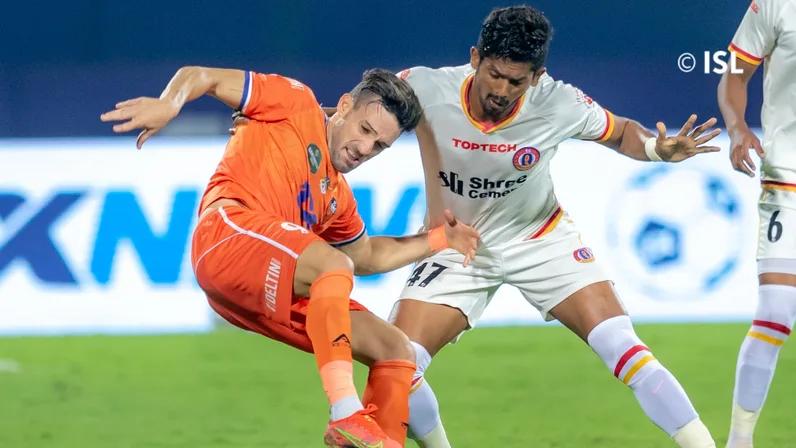 Things remained sedate till the 81st minute when Goa players appealed for a penalty. In a bid to clear a ball off to safety, Sourav Das got involved in a tangle inside the penalty area and brought down Ortiz. Though there certainly was some contact, referee Aditya Purkayastha remained uninterested in the Gaurs’ appeals and gave the Red and Golds a freekick instead.

This was East Bengal’s first win in 347 days in the Indian Super League and a much-awaited one for their enormous and loyal fanbase. They have also moved up to the tenth position on the standings with this win and will now take on Hyderabad at the Tilak Maidan Stadium on Monday whilst the ninth-placed Goa will be in action against Bengaluru at the same ground on Sunday.