Mumbai City had a comfortable 4-0 victory over Bengaluru

Mumbai City extended their unbeaten streak to seven games in the 2022/23 Indian Super League season, as they pipped Bengaluru 4-0 here at the Mumbai Football Arena on Thursday. Jorge Pereyra Diaz, Apuia, Bipin Singh, and Lallianzuala Chhangte scored the goals for the Islanders.

Though his team handed Chennaiyin a 6-2 thrashing in the previous outing, Mumbai City head coach Des Buckingham made a change to his starting XI. Vignesh Dakshinamurthy returned to the fray at the expense of Mandar Rao Dessai.

On similar lines, Bengaluru head coach Simon Grayson also made a change to the team that suffered a 0-1 defeat against East Bengal. Javi Hernandez played as an attacker in Sunil Chhetri’s place, whereas Danish Farooq slotted in the vacant midfield spot.

The Islanders dominated the game right from the first minute and almost took the lead in the 10th minute. From the midfield, Ahmed Jahough played a delightful pass for Diaz, but the Argentine forward’s shot was blocked by one of Grayson’s defenders.

A floodlight failure caused a stoppage in play soon after, but once the issue was resolved, Mumbai City hardly took a couple of minutes to open the scoring. The goal was served to Diaz on a plate by Alan Costa, who lost possession in a dangerous area. Having only goalkeeper Gurpreet Singh Sandhu to beat, the former Kerala Blasters man had absolutely no problems in finding the back of the net. 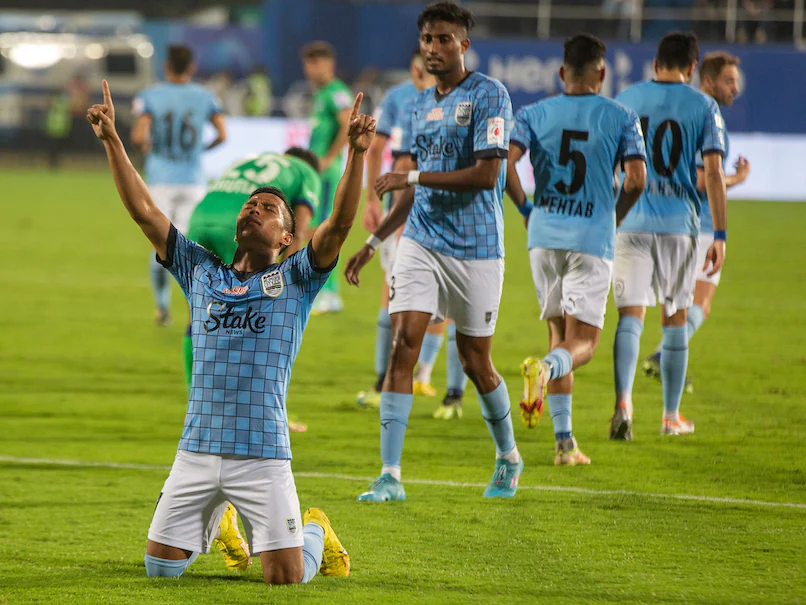 The Islanders could have doubled their lead in the 16th minute when Chhangte delivered a cross for Diaz, but the latter could not get the right connection on his header. The ball eventually dropped for Bipin, but his shot was deflected for a corner.

Two minutes later, it was the Blues’ turn to launch their first major attack. Roy Krishna played a good ball for Javi, who did well to pull the trigger, but the Islanders’ custodian Phurba Lachenpa was up to the mark.

The next few minutes saw Grayson’s men trying their best to find an equalizer. Krishna had an attempt in the 21st minute, followed by an Udanta Singh strike in the 24th minute. However, neither of the shots had the power to beat a spirited Phurba.

Against the run of play, it was the Islanders who almost scored another goal just before the half-hour mark. Bipin played a pass for Greg Stewart and the Scotsman did well to launch a shot quickly, but this time around, Gurpreet could not be beaten.

However, Buckingham’s team did not have to wait long for their second. After receiving a through ball from Rahul Bheke, Stewart cut in a pass for Bipin. The winger could have had a go himself but showed his football intelligence by playing a dummy to set Apuia free, and the midfielder did the rest by placing his shot past Gurpreet.

Bengaluru needed a positive start to the second half and they did get so, but without any goals to show for it. Just two minutes after the resumption, Krishna had yet another shot only to see the ball sailing over the crossbar.

As they did all throughout the game, Mumbai City did well to first soak up the pressure and then return the favour. In the 57th minute, Stewart bamboozled every player who stood in his way before playing a pass for Bipin, but the latter’s shot struck the side-netting.

However, it did not mean much as the third goal arrived only a minute later. Bheke played a brilliant ball for Diaz which set the latter one-on-one with Gurpreet, but instead of going for what would have been his brace, the two-time Malaysian Super League winner squared it for Bipin, who calmly slotted the ball into an empty net.

In the next few minutes, the midfield duo of Apuia and Jahouh tried their luck, but while the former’s shot was blocked, the latter’s effort was not on target. The fourth goal eventually arrived in the 74th minute of the match.

Diaz tried to play a through ball into the box, but his attempt was half-cleared by Sandesh Jhingan. Fortunately for the Islanders, the ball landed at Chhangte’s feet, who unleashed a thunderbolt to make the scoreline 4-0.

Buckingham’s side almost had another in the 86th minute when Bipin played a precise cross for substitute Vikram Pratap Singh, but the youngster got his feet tangled up. In a desperate attempt to at least have a consolation goal, Udanta had a go in the 88th minute, but Rostyn Griffiths deflected the shot for a corner.

With this victory, Mumbai City remains in the second position with 15 points. They will now take on NorthEast United next Friday while Bengaluru, who are reeling in 10th place with 4 points, will be up against Goa next Saturday.