Morocco will be looking to write history by progressing into the quarterfinals of a men’s FIFA World Cup for the first time in their history when they take on Spain at the Education City Stadium in Ar-Rayyan on Tuesday.

Coming into the World Cup in Qatar, everyone knew what Luis Enrique’s Spain was about and how they would play. Then the World Cup commenced with the 7-1 drubbing of Costa Rica in a quintessentially Spain fashion, and everyone was – justifiably – in awe.

However, after matchday 1, cracks have emerged and their path to the next stage has been anything but straightforward. At one point in time, while La Furia Roja was facing the Samurai Blue, it even became a mathematical possibility that Spain was getting kicked out of the group stage.

More or less, for large chunks in all three games, Spain has executed their primary plan and behaved like a child who does not share his toy with his peers. 1009, 569, and 995 are the number of passes La Furia Roja completed against Costa Rica, Germany, and Japan respectively.

Yet, their plan A of beautifully and continually shifting the ball around has not always necessarily had the cutting edge. Their xG of 0.6 and 1.0 after the Costa Rica fixture proves the point.

Moreover, their display against Germany and Japan gives the impression that the Costa Rica game was an anomaly, and similar to how it was for Enrique’s Spain in Euro 2020, the overbearing concern remains the inability to apply the finishing touch to patiently and intricately constructed moves. Another is their linearity because besides bringing on or playing Alvaro Morata, Spain does not have many tricks up its sleeves in the form of a plan B.

On the other hand, having won more matches in a men’s World Cup than ever before (7), African teams are having a festival in Qatar, and Morocco, who topped Group F and qualified for the Round of 16 after 36 years, have been the continent’s torchbearers.

Only letting in one goal, Walid Regragui’s side has been a tough nut to crack for anyone who has tried. Ideally, they prefer to have a stronghold over the possession but considering the quality of their opponents in this world cup, they’ve adapted amicably and forego their desire to boss possession in favour of maintaining shape as a collective unit. 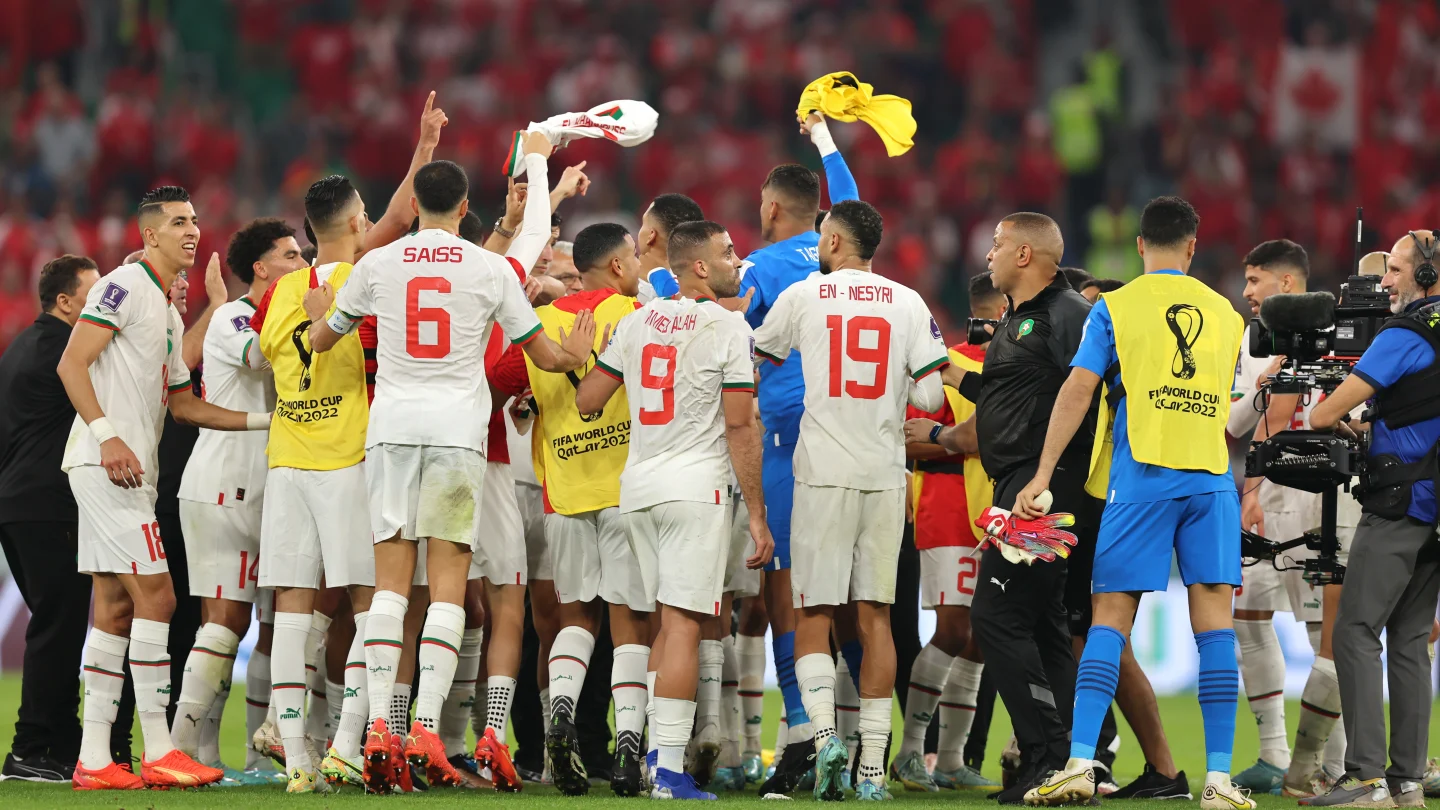 Morocco is unbeaten in the ongoing football World Cup

Hence they’ve had, what you might refer to as the exact opposite of a lion’s share of possession. But they’re superbly drilled defensively and have lethal firepower on the wings, courtesy of the sheer brilliance of their two fullbacks, Achraf Hakimi, and Noussair Mazraoui along with their wingers, Hakim Ziyech and Sofiane Boufal.

Much to the liking of their manager, with an xG of 2.4 and xGA of 2.8, their offence and defence have been fairly well-balanced. Going into the knockout phase, The Atlas Lions are the new dark horses for many people, and Spain would not even dream of underestimating the threat carried by the north Africans.

Morocco kicked off their World Cup with a hard-fought goalless draw against 2018 finalists Croatia. They then stunned Belgium’s “Golden Generation”, deservedly beating them 2-0 to put one foot in the last 16. And a 2-1 victory over Canada saw them top the group – the first time an African side has done so since 1998.

Spain began with an ominous 7-0 thrashing of Costa Rica and was immediately considered to be one of the teams to beat. A 1-1 draw with Germany followed in a game that Enrique’s men looked largely comfortable controlling throughout. But a 2-1 defeat to Japan in their third group stage match was a warning sign that they may not be as accomplished as the win against Costa Rica suggested.

Spain is unbeaten in their three games against Morocco. They claimed 1-0 and 3-2 wins over the course of an 11-day period in November 1961. And their only other clash came in the group stage of the 2018 World Cup where they played out a 2-2 draw. 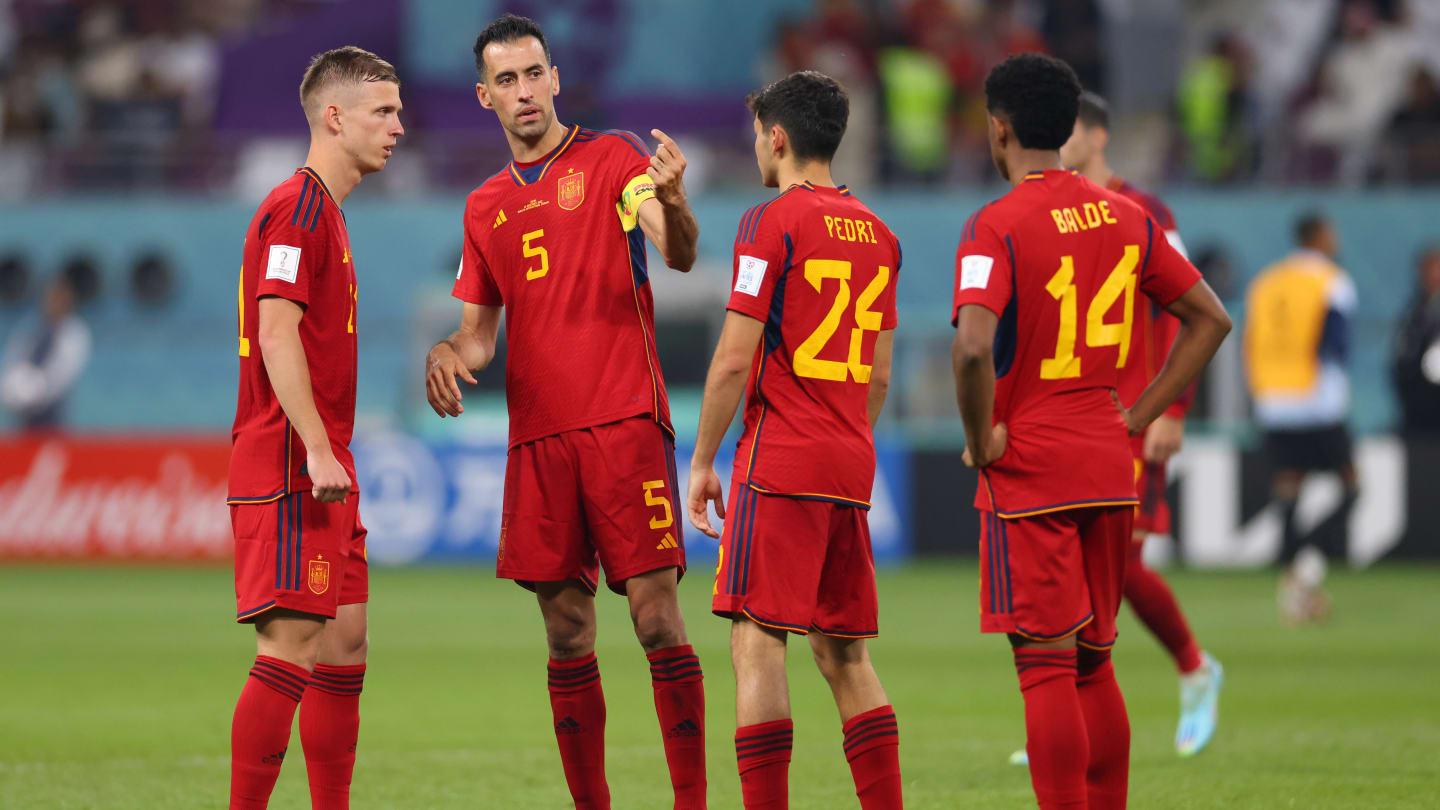 Spain is unbeaten against Morocco in international football

In that game, Morocco was already eliminated from knockout stage contention at the time. Spain very nearly lost the match but Iago Aspas got a 90th-minute equaliser to preserve a point. This will thus be the very first time that these two sides play in a knockout game in any competition.

Morocco brought the likes of Ziyech, Ouhani and Hakimi off before the end of the Canada clash so they had a bit more of a rest heading into the last 16. And with no reported injuries for Walid Regragui to deal with, they will be able to head into the clash with a full-strength side.

Spain also has little in the way of fitness concerns. Enrique rested Ferran Torres, Marco Asensio, Jordi Alba and Dani Carvajal for the Japan defeat – although they did all come off the bench when they fell behind. However, expect that quartet to return from the start for the Morocco game on Tuesday.

This could be a really tricky game for Spain with Morocco looking really impressive and consistent during the group stage. Spain won’t simply be able to slice open this Moroccan defence like they did against Costa Rica for example and it could potentially be a frustrating game for Luis Enrique’s team.

It wouldn’t be a major shock if this went the distance although Spain may just have the edge should extra time be needed with better options to bring off the bench and freshen things up. They also have plenty of experience of extra time football from Euro 2020. Thus, we back Spain to win this clash but in extra time.