Liverpool handed hammer-blow in title pursuit, Watford relegated back to the Championship, and more… 

Liverpool and Tottenham Hotspur played out a 1-1 stalemate

We are now at that stage of the season where the margin of error does not exist anymore and even the smallest of mistakes can prove to be fatal. A few teams learned it the hard way this weekend, as while a 1-1 draw came down as a major blow in Liverpool’s title aspirations, Watford and Norwich City were officially demoted to the English second flight. Meanwhile, Manchester City boosted their chances of successfully defending the title by beating Newcastle United 5-0, whilst a 2-1 win over Leeds United meant that Arsenal is now very close to making a comeback in the apex club competition of Europe – the UEFA Champions League.

Burnley had momentum on their side as they won three matches on the trot before this fixture, but that could not prevent themselves from succumbing to a defeat against Aston Villa. Steven Gerrard’s men got their second consecutive win to move one step closer to the top half of the points table.

They got the lead very early on as Danny Ings opened the scoring in the 7th minute, whilst a 31st-minute strike from Emiliano Buendia made it 2-0 for the Villans. Ollie Watkins tripled the visitors’ advantage seven minutes into the second half, and though Maxwel Cornet got a goal back for the Clarets in the 91st minute, it was too little too late.

The Todd Boehly-era at Chelsea has begun and the new owner was present at the Stamford Bridge to cheer the team, but he will not be particularly pleased with what he witnessed as Thomas Tuchel’s men blew a two-goal advantage to settle for a stalemate against Wolverhampton Wanderers.

Out-of-favour striker Romelu Lukaku was given a chance in this fixture and he justified his selection by first breaking the deadlock in the 56th minute and then doubling Chelsea’s advantage in the 58th minute. Portuguese young Francisco Trincao reduced the deficit for Bruno Lage’s team, and just when it seemed the game will end 2-1, a 97th-minute header from skipper Conor Coady helped the hosts steal a point from the jaws of defeat.

Watford was officially relegated to the English second flight, the EFL Championship, on Saturday as they suffered a 1-0 defeat against Crystal Palace. The decisive goal was scored in the 31st minute by Ivorian attacker Wilfred Zaha, who made no mistake in converting from the penalty spot.

The game was largely dominated by Patrick Vieira’s side as Roy Hodgson’s men did not look convincing, and their troubles were compounded in the 68th minute when Hassane Kamara was given marching orders. 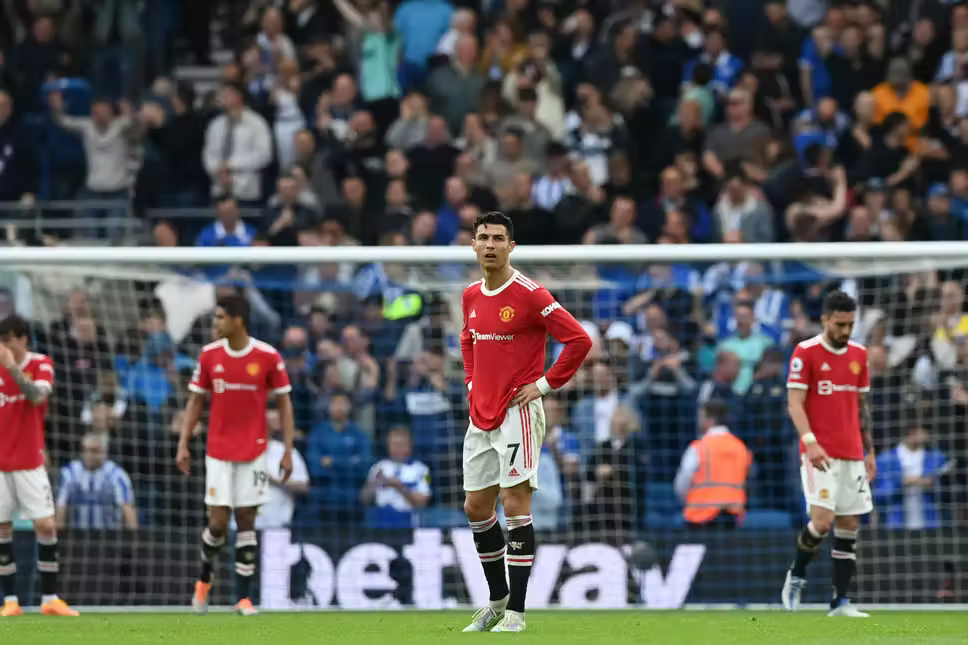 From conceding nine goals across two matches against Liverpool to losing 4-1 against noisy neighbours Manchester City, Manchester United has suffered humiliations aplenty this season, and another feather was added to the cap of shame in the form of a 4-0 defeat against Brighton & Hove Albion.

The scoring was opened by a player who previously was linked with a move to the Red Devils, Moises Caicedo, in the 15th minute. The first half ended 1-0 but all hell broke loose in the second period. Within 15 minutes since the resumption, Marc Cucurella, Pascal Gross and Leandro Trossard all got their names on the scoresheet to complete Brighton’s biggest ever victory in the Premier League.

Though there are still quite a few matches left, it will be fair to say that it is ‘Advantage Manchester City’ in the title race after their fellow title competitor Liverpool played out a 1-1 draw against Tottenham Hotspur.

A fine move involving Harry Kane, Ryan Sessegnon and most importantly, goal-scorer Heung-Min Son made it 1-0 for Antonio Conte’s team in the 56th minute, but Jurgen Klopp’s men restored parity in the 74th minute, courtesy of a Luis Diaz strike.

After Watford, Norwich City became the second team to officially confirm their participation in next season’s EFL Championship, as a 4-0 drubbing against West Ham United sealed their relegation. The scoring in this fixture was opened by Algerian attacker Said Benrahma, who found the back of the net in the 12th minute.

Michail Antonio joined the party to double the Hammers’ advantage in the 30th minute, whilst the scoreline turned 3-0 in the first half itself as Benrahma scored his second just seconds before the lemon break. The only goal in the second half came from a penalty, which was converted by Manuel Lanzini in the 65th minute.

Everton handed themselves a massive boost in their bid to avoid relegation, as they secured a 2-1 win over Leicester City to get themselves out of the relegation zone. The Toffees had a fantastic start, as Vitaliy Mykolenko opened the scoring in the 6th minute.

The lead did not last long as Patson Daka scored the equalizer for Brendan Rodgers’ team only five minutes later, but Frank Lampard’s team reclaimed their one-goal cushion in the 30th minute, with another defender in Mason Holgate getting his name on the scoresheet. With this win, Everton is two places and one point ahead of the relegation zone.

Arsenal is now just one step away from announcing their return to the UEFA Champions League, as they established their hold over the fourth place by beating Leeds United 2-1. Eddie Nketiah drew first blood with his 5th-minute goal, while the former Leeds United loanee scored his and his team’s second goal only five minutes later.

Leeds United did not help their cause as full-back Luke Ayling was given marching orders in the 27th minute for a reckless two-footed challenge. Despite the numerical disadvantage, Jesse Marsch’s team reduced the deficit in the 66th minute via Diego Llorente, but it proved to be nothing more than a mere consolation. 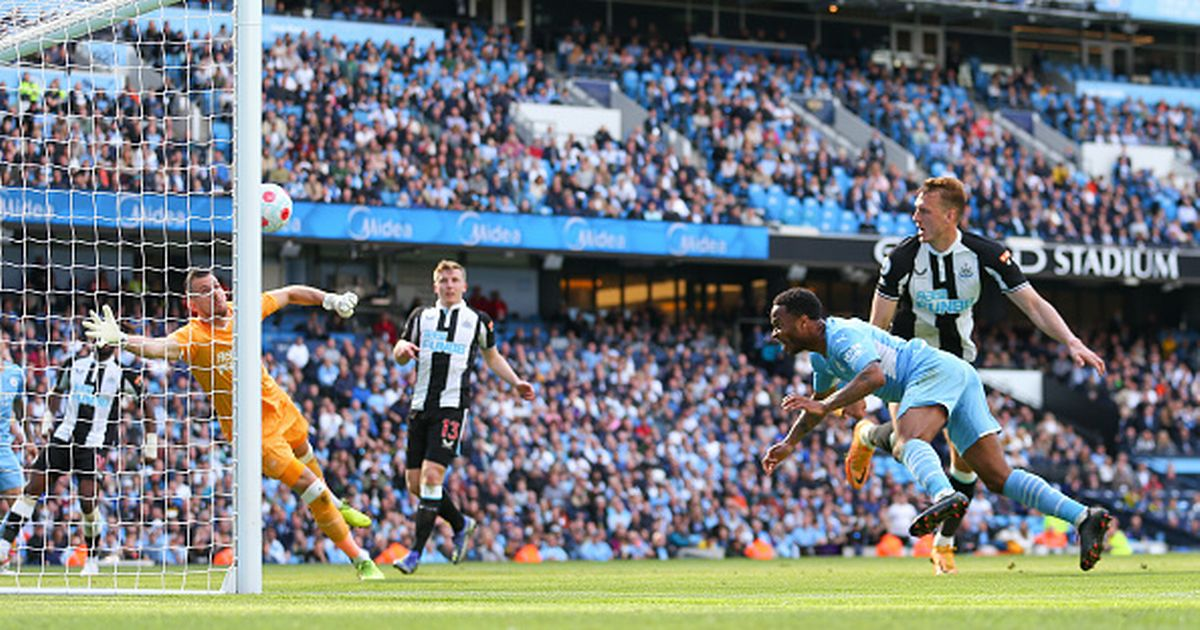 With Liverpool dropping points against Tottenham Hotspur, Manchester City had a golden opportunity to create a three-point cushion over fellow title contenders, and unlike their midweek heartbreak against Real Madrid, Pep Guardiola’s men were not willing to let opportunities go begging on Sunday.

Raheem Sterling opened the scoring for the Cityzens in the 19th minute, whereas Aymeric Laporte doubled the defending champions’ lead in the 38th minute. Eddie Howe’s men never looked in control and conceded their third goal in the 61st minute when Rodri got his name on the scoresheet.City’s five-star performance needed icing on the cake in the form of five goals and it eventually happened when Phil Foden joined the party in the 90th minute, while Sterling scored his second just seconds before the full-time whistle.