Alan Costa scored the winner in the 87th minute

Bengaluru rode on a late Alan Costa winner to win 1-0 against NorthEast United at the Sree Kanteerava Stadium, as football returned to Bengaluru, on Saturday. The Blues, who returned to their Fortress after a two-season hiatus, saw nineteen thousand fans make their way into the stands.

The 87th-minute goal came from a corner as the 6’3” Brazilian towered above the defense to meet a fine ball from Javi Hernandez. But the match ended in acrimony when an injury-time equaliser from Jon Gaztanaga was ruled out for offside, much to the chagrin of the coach Mark Balbul, who was sent off for protesting.

Earlier, Grayson started with a front three of Chhetri-Krishna-Sivasakthi, while Costa, Aleks Jovanovic, and Sandesh Jhingan were the three men at the back. The visitors, meanwhile, started with Frenchman Romain Philippoteaux in an attacking role with Matt Derbyshire acting as the focal point.

It was a part-tepid, part-live performance from BFC. From the outset, the idea was to exploit the pace of N. Sivasakthi and Roy Krishna. Long-range passes from Suresh Wangjam and Prabir Das to the two forwards were a constant feature.

In the first half, Bengaluru enjoyed the majority of ball possession and Chhetri’s 23rd-minute header off a Bruno Silva free-kick was off target Bengaluru had the first big chance of the game when Naorem Roshan blitzed past white shirts down the left before deftly cutting the ball back for Sivasakthi. The young striker’s attempt to place the ball beyond Arindam Bhattacharja flew just inches wide.

Sivashakthi had the sight of an open net with only the goalkeeper to beat after Roshan Naorem’s cut-back had him in perfect position. But in his bid to get done with things in a jiffy, Sivashakthi missed the target.

NorthEast had a chance of their own soon after when Jithin MS picked up on a pass forward and ran through on goal, but Prabir Das did well to recover in time to make the challenge. Shots from Bruno Ramires and Suresh Wangjam went wayward as Bengaluru continued to make most of the noise. 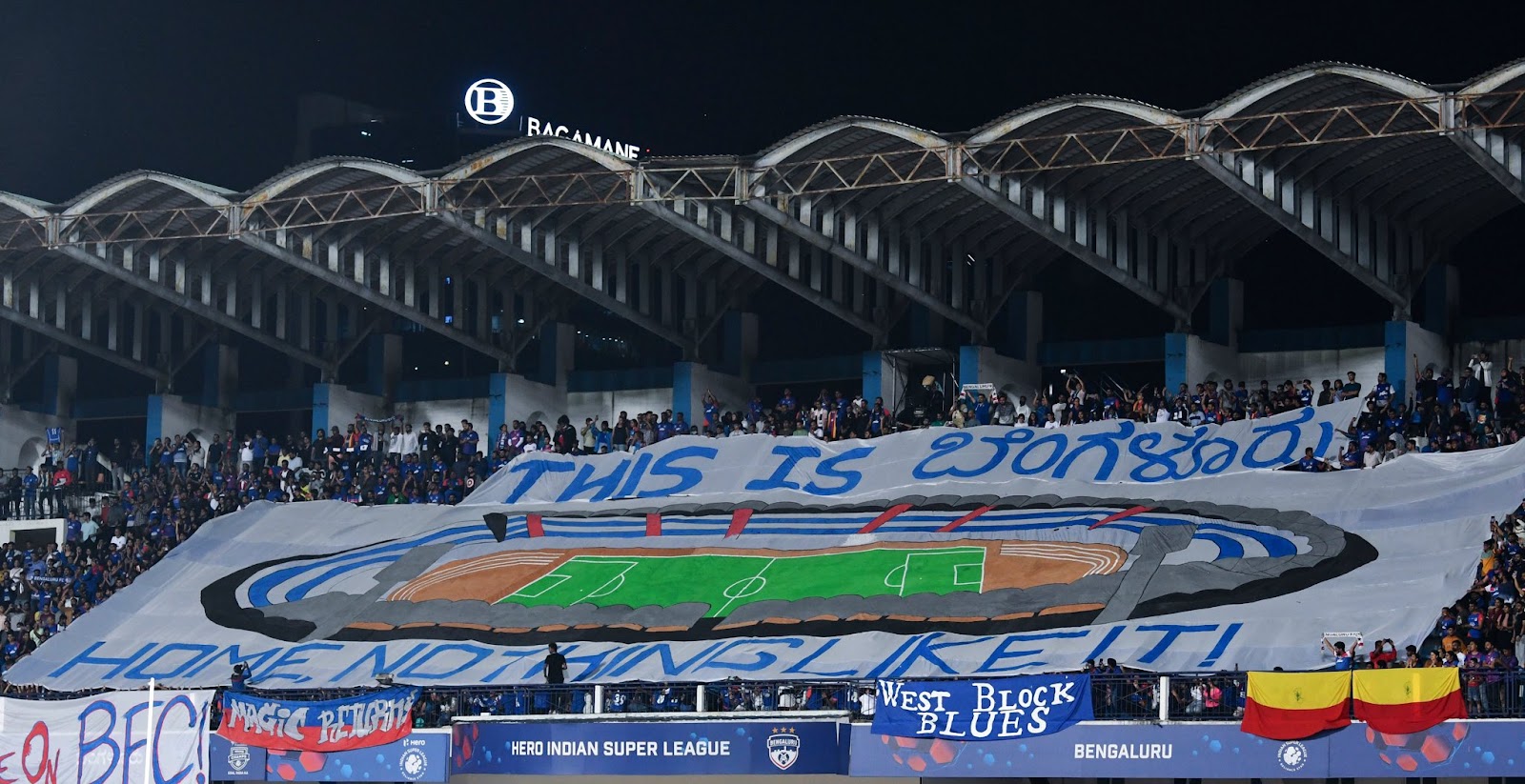 The West Block Blues are back at the den

Heading into the break, the Blues came close to finding the back of the net, once again through Sivasakthi, but the striker’s shot from a Chhetri pass was deflected wide as the referee drew a halt on proceedings.

The encounter, though, soon slipped into a contest of half-chances. Philippoteaux was a mesmerising presence in the No. 10 role for NorthEast, but his teammates disappointed the fans.

With the game goalless at the hour mark, Grayson rang in a double change, bringing on Javi Hernandez and Jayesh Rane for Suresh Wangjam and Krishna. Soon after, Bengaluru squandered yet another chance, this time, through Chhetri. Picking out a long pass from the back, Sivasakthi charged into the box and squared the ball for his captain who couldn’t connect cleanly.

Sensing the need to take the game to NorthEast, Grayson brought on Udanta Singh for Jovanovic, as Bengaluru switched gears in the attack. The winger made an instant impact, with his first involvement in the game a shot that fizzed wide of the bar. Moments later, Chhetri played a quick give-and-go with Udanta, but the skipper’s eventual shot could only find the side netting.

Bengaluru could have gone ahead in the 78th minute when Indian international Udanta Singh received a ball at the edge of the North East penalty box. However, his shot sailed over the cross-bar.

With only minutes left to play, Bengaluru won a corner that the substitute Javi Hernandez swung in for Costa, who nodded down and past Bhattacharja to give the Blues the lead in the 86th minute.

The pressure soon told, with Costa’s goal sending the nearly 20,000 fans into raptures. NorthEast’s Parthib Gogoi nearly poured cold water on BFC’s celebrations but his stunning on-the-turn shot clattered off the crossbar. There was more drama in store, but BFC was not to be denied.

With four minutes added on, NorthEast United had the ball in the back of the net at the other end through Jon Gaztanaga however, on consultation with his assistant, referee Rahul Gupta pulled it back, citing an infringement in the box.

The Blues saw the remainder of the game through to secure three points. Bengaluru next travel to Chennai, where they face Chennaiyin on Friday, at the JN Stadium. Meanwhile, NorthEast United next host defending champions Hyderabad on Thursday at the Indira Gandhi Athletic Stadium.

Goa ends winless streak with a stunning 3-1 triumph over