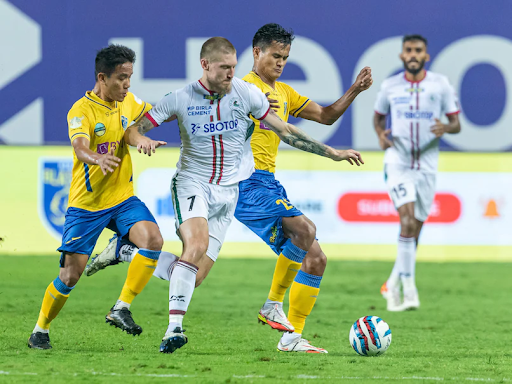 Kerala Blasters and ATK Mohun Bagan will cross swords in the last match of matchday 2 of the 2022-23 Indian Super League season. This fixture will be played at Kochi’s Jawaharlal Nehru Stadium on Sunday.

The Blasters, who did well to make it to the final last season, have shown promise in the very early stages of the new season. In their inaugural match, Ivan Vukomanovic’s team secured a 3-1 defeat against East Bengal.

The story of ATK Mohun Bagan, on the other hand, is slightly different. After a disappointing exit in the AFC Cup, Juan Ferrando’s men could not bounce back in their ISL opener, as they threw away a one-goal advantage to lose 2-1 against Chennaiyin in their opening tie.

Before coming to this competition, Kerala Blasters featured in the 2022 Durand Cup, where they managed to make it out of their group despite playing a young team with hardly any experienced players. Eventually, they lost out to Mohammedan in the quarter-final.

As for their first ISL match, Vukomanovic’s boys did not put up a foot wrong to secure all three points in the 3-1 triumph against East Bengal. Adrian Luna scored Kerala’s opening goal, whereas the other two goals were scored by the new Ukrainian recruit, Ivan Kalyuzhnyi.

ATK Mohun Bagan also featured in the Durand Cup, but despite playing their full-strength squad, the Mariners could not make it into the quarter-finals. Following the premature exit, Ferrando’s men also lost 3-1 against Kuala Lampur City in the inter-zonal play-off semi-final of the 2022 AFC Cup.

It seemed that the Mariners turned things around when Manvir Singh scored the opening goal in the 27th minute during their first match of the new ISL season against Chennaiyin. However, second-half goals from Kwame Karikari and Rahim Ali extended their poor run of outcomes.

The head-to-head records are completely inclined in ATK Mohun Bagan’s favour. These two teams have crossed paths on four occasions and the Mariners have emerged victoriously on three of those meetings, with the other fixture resulting in a stalemate.

That stalemate was a 2-2 draw in the last meeting between these two teams. Luna scored a brace for the Blasters, while for the Mariners, their former Australian striker David Williams scored the first goal, while Joni Kauko netted the second.

Given how his team performed in the last match, Vukomanovic could decide against making any tweaks to his starting XI, though there is room for changes. After his brilliant cameo appearance in the last match, Kalyuzhnyi certainly deserves a start.

He could replace Jeakson Singh, who did not look very impressive against the Torch Bearers. However, to maintain the overseas count to four, the Serbian tactician will then need to replace his Australian striker Apostolos Giannou with Rahul KP.

Ferrando, on the contrary, might consider changing his formation, as his 3-5-2 set-up did not look convincing against the Marina Machans. Instead, the Spaniard could opt for a 3-4-3 formation for this match, which will allow them to have more attacking threats.

Liston Colaco could form an attacking trio with Manvir Singh and Dimitri Petratos, while Deepak Tangri could be dropped to the bench. Besides that, Asish Rai looked pretty ordinary in the last match, but the full-back is likely to retain his place in the team for now.

It is difficult to pick a winner in this match, as while the current form is totally inclined in the Blasters’ favour, it also has to be noted that the Mariners have never lost against the men from Kerala. Hence, we have predicted a 1-1 draw.