Kerala Blasters pipped Chennaiyin 3-0 in a Southern Derby clash at the Tilak Maidan Stadium extending their unbeaten streak in the 2021-22 Indian Super League season to six games. Jorge Pereyra Diaz and Sahal Abdul Samad scored a goal each in the first half while Adrain Luna made it 3-0 in the second half.

Since his team did fairly well in their last encounter against Odisha, Chennaiyin head coach Bozidar Bandovic did not make any changes to his starting XI rolling out the same 3-4-1-2 formation. Similarly, Kerala Blasters manager Ivan Vukomanovic fielded the same starting XI that took on and dominated reigning champions Mumbai City recently.

The Tuskers dominated possession right from the first minute and it took them only 9 minutes to break the deadlock. A brilliant floated ball from the half-line by Puitea found Diaz in space and though he had an acute angle to work with, the in-form Argentine striker made no mistake in slotting his shot past the Chennaiyin goalkeeper Vishal Kaith.

The flow of the game did not change even after the goal, with Adrian Luna running rings around the Chennaiyin defense. In the 24th minute, the Marina Machans almost scored when a precise Vladimir Koman corner found Germanpreet Singh at the near post who did well to keep his header on target but Kerala Blasters custodian Prabhsukhan Gill was alert to avert the danger.

The 25-year-old Indian midfielder could not have done much more on that occasion, but the opportunity he missed seven minutes later was unforgivable. Kyrgyz attacker Mirlan Murzaev made a darting run down the left flank skillfully dribbling past Ruivah Hormipam and he could have pulled the trigger himself but chose to pass it to Germanpreet who had the entire goal gaping but managed to drag his shot wide.

Chennaiyin paid for their mistakes when Samad doubled Kerala’s advantage in the 38th minute. A careless clearance by Kaith was collected by Alvaro Vazquez and passed on to Samad who had his first attempt blocked but did well to score from the rebound.

However, it was not the last big chance of the half. Another defense-splitting through ball from the half-line by Diaz found Vazquez through on goal. The former Getafe striker managed to keep his shot on target but Kaith redeemed himself with a fantastic diving save. 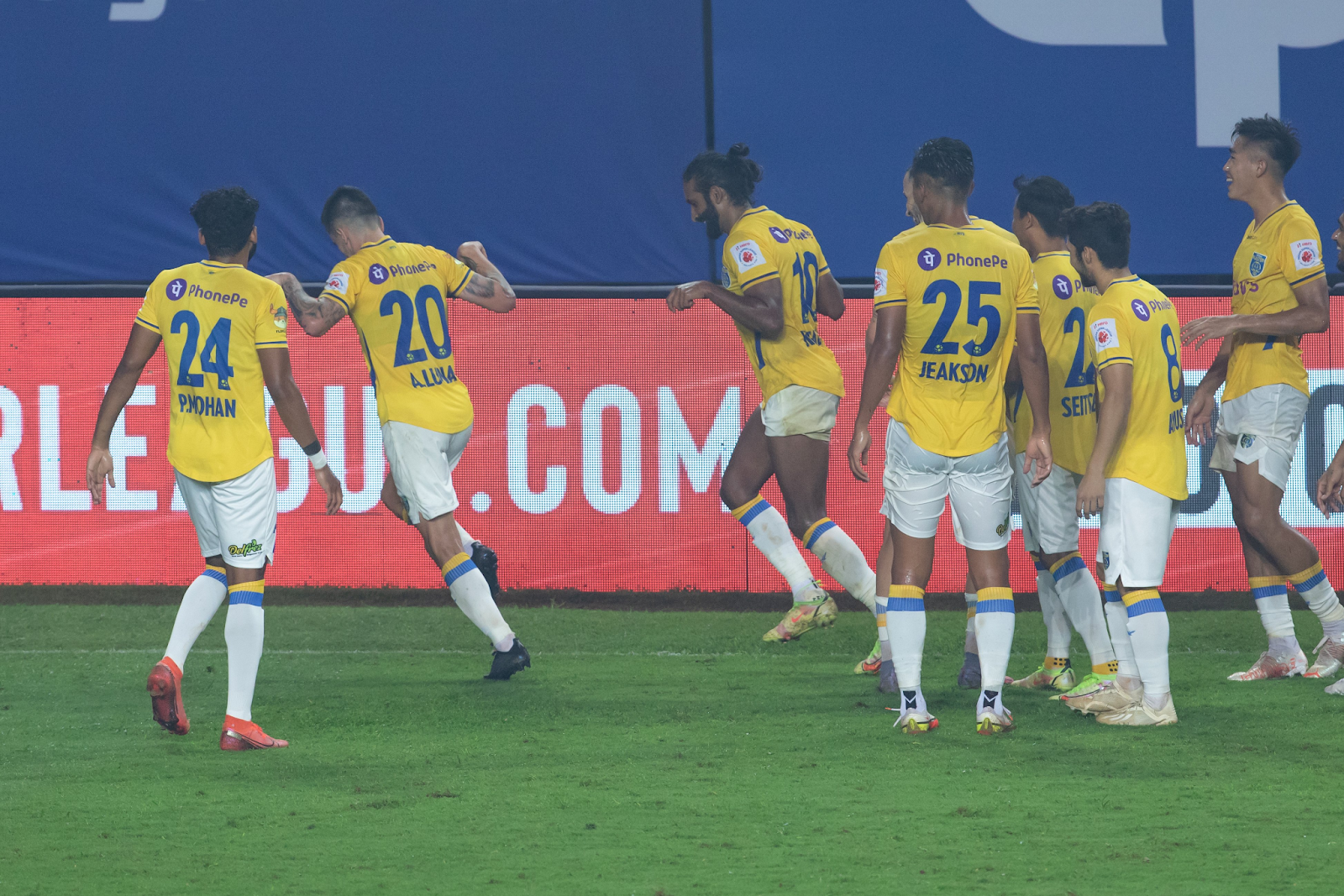 Only Hyderabad have conceded fewer goals than Kerala Blasters

Bandovic introduced Lukasz Gikiewicz and Salam Ranjan Singh at the start of the second phase but the first big opportunity of the half fell to the Tuskers. Skipper Jessel Carneiro put his laces through a cutback by Luna but his powerful effort could only find the crossbar instead of the back of the net.

The tides changed past the hour mark and the Marina Machans took control of the midfield. The likes of Reagan Singh and Anirudh Thapa did put in a few intimidating crosses but those were either parried by Gill or cleared by the Kerala backline.

The two-time winners had to lament missed chances once again when Luna made it 3-0 for the Tuskers in the 79th minute. Attempting to thread a ball for Vazquez, Luna had his pass cut out by a Chennaiyin defender but it came back towards him and the Uruguayan took the onus on his shoulders this time launching an accurate strike past Kaith.

With this win, Kerala Blasters have moved to third place and will take on Jamshedpur on Sunday while the sixth-placed Chennaiyin will lock horns with Bengaluru next Thursday.