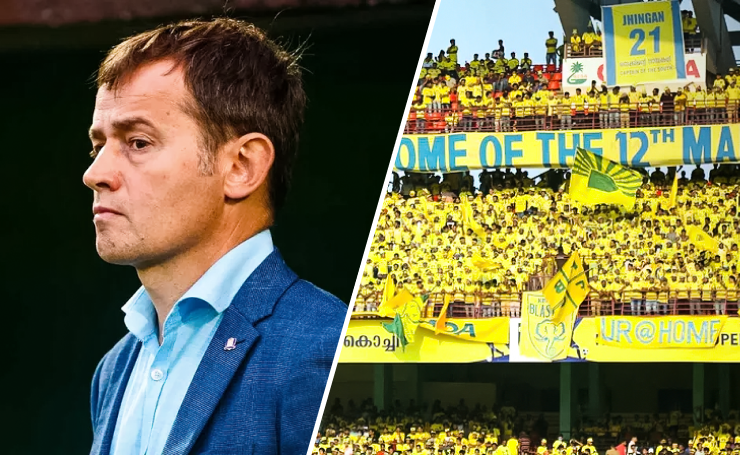 Kerala Blasters FC and Kibu Vicuna have parted ways after a 4-0 defeat to high-flyers Hyderabad FC on Tuesday.

The Blasters have gone through a tumultuous season where they have only 3 matches, drawn 7 matches, and lost 8 of the 18 games played so far. Kerala sits 10th in the league table currently and with the fans unhappy and frustrated to see their club underperform once again, the manager decided to call an end to his time with the Yellow Army.

The Spanish coach thanked the management and the players for the support throughout his stay at the club. He said,

“Unfortunately, the season has been unusual and unexpected. My parents taught me to be responsible for what I am doing so I always give all my heart to it, but also give no excuses. I want to thank all the management, players, coaching staff, and members of the club for their professionalism, kindness, and closeness. Especially, I want to express my gratitude to all the Kerala Blasters fans for their support from the first till the last day, which makes you exceptional and amazing. I wish all of you and the club all the best in the future. You deserve it.”

Vicuna won the I-League title last season with Mohun Bagan with four matches to go and Kerala Blasters looking for a rebuild ahead of the 2020-21 ISL season hired the Spanish coach to steer Kerala’s ship in the right direction.

Under Kibu Vicuna, the Blasters always looked inconsistent and could never turn out with performances when required. Vicuna’s side failed to beat Odisha FC on both occasions, the team sitting at the bottom of the table for a long time, losing to the Juggernauts at the GMC Bambolim Stadium as well.

Kerala Blasters FC sporting director Karolis Skinkys thanked the former Blasters head coach for his professionalism and commitment to the club. He said,

“I would like to thank Kibu for his honesty and responsibility in this decision. We had a clear objective to make improvements this season. Unfortunately, the results were not what we expected. We are grateful for his commitment and professionalism towards the club and wish him well for the future.”

Assistant coach and former Indian international Ishfaq Ahmed will take charge of the Blasters on an interim basis for the remaining two matches of the league season starting with the Southern Derby against Chennaiyin FC on Sunday.