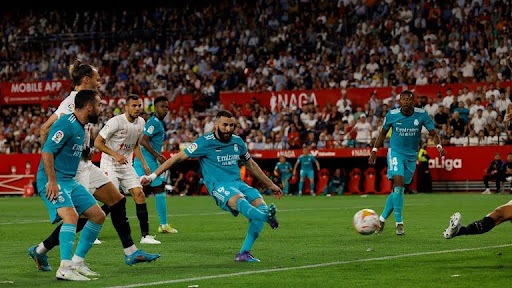 Karim Benzema scores the winner for Real Madrid against Sevilla

With the 32nd La Liga matchday coming to an end, Real Madrid strengthened their grip at the top with a 3-2 win over Sevilla. The gap between them and second-placed Barcelona stands at 10 points now as the Blaugranas lost 0-1 to relegation-threatened  Cadiz.

Real Sociedad and Real Betis played out a 0-0 draw to kickstart the proceedings in Matchday 32 of La Liga. Both clubs had plenty of opportunities to take the lead but spurned their chances.

Sociedad’s David Silva was sent off in the 93rd minute while protesting a decision to award Betis a free kick. It was the Spanish international’s first red card in his 700 professional appearances.

Heading into the contest on the back of three consecutive defeats, Elche dominated the first half and duly took the lead with three minutes to go. Colombian international Johan Mojica’s low finish pierced the ball past four defenders and found its way into the net.

Elche showed no mercy after the change of sides as Pedro Bigas headed home Fidel’s free-kick to score against his former side. Just when it seemed things couldn’t get worse for Mallorca, Lee Kang-In scored an own goal to bury his own side’s grave in the 81st minute.

Rayo Vallecano knocked on Alaves’ doors multiple times in the first half but Stole Dimitrievski stood up to his task between the sticks. Alaves striker Joselu Mato repaid the hard work done by their ‘keeper by scoring a goal in the 64th minute. The opposition’s keeper lost track of the trajectory midway and ended up palming it back into his own net.

Dimitri Foulquier mistakenly handled the ball inside the penalty box to award Osasuna a penalty kick. Chimy Avila rose up to the occasion to rifle the ball into the roof of the net in the 50th minute to draw first blood.

David Garcia unleashed a swinging cross towards the centre of the box and centre-forward Ante Budimir towered above two defenders to nod the ball home and doubled Osasuna’s lead. In the 83rd minute, Goncalo Guedes won a penalty for Valencia after substitute Ruben Garcia clumsily brought him down.

The rival keeper stood rooted to his spot as Carlos Soler nestled the ball towards his left with the outside of the boot to score a consolation goal for Valencia.

Gerard Moreno broke the deadlock as early as the 7th minute for Villareal after seeing the ‘keeper come out and faked a shot to force him to dive early. The 30-year-old followed it with a delicate strike into the empty net to hand the visitors the lead.

Moreno turned into the provider ten minutes later by winning the ball in the midfield and finding Manu Trigueros through on goal. Trigueros made no error in slamming the ball past the ‘keeper with his second touch.

Villarreal had two glorious opportunities in the final minutes of the first half but failed to capitalise on either of them. Getafe’s Mattias Oliveira tiptoed his way past three defenders to pass the ball towards Enes Unal, who rocketed the ball into the net from close range in the 63rd minute. However, Getafe couldn’t draw further inspiration as Villarreal emerged victorious courtesy of their lightning early twin strikes.

The 19th placed Levante bagged an emphatic 4-1 victory over 17th placed Granada courtesy of Jose Luis Morales’ heroics. The Levante captain set up the first goal of the contest by cutting through the left wing and assisting Dani Gomez in the 17th minute, who had the simple task of poking the ball into an empty net.

Morales won a penalty for his side after being taken down by German Sanchez, who saw a second yellow card in the 54th minute. Sending the ‘keeper the wrong way, Morales directed the ball in the centre to score another goal for the away side.

Morales turned into a provider once again in the final quarter of the match as his low cross from the right flank was smashed home by an unmarked Mickael Malsa from the box. Alex Collado scored his first goal in Granada colours in the 92nd minute to save some grace. However, Levante had other plans as Darwin Machis found Roberto Soldado inside the box as the latter pecked the ball past the goal-line from a hand-shaking distance. 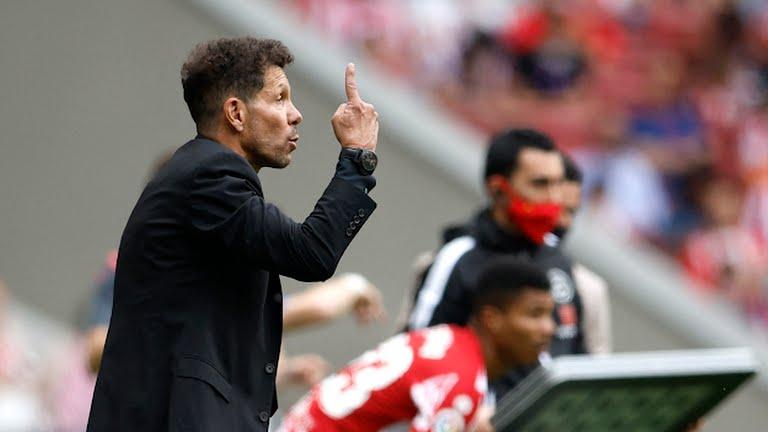 Diego Simeone’s substitutes turned the game in their favor

After a goalless first half, two of Atletico Madrid’s substitutes Matheus Cunha and Yannick Carrasco combined well to score the first goal in the 52nd minute. The former fed the latter with a through ball and Carrasco fired a shot just in the nick of time to break the deadlock.

Already on a yellow card before, Atletico Madrid’s Geoffrey Kondogbia handled the ball just outside the box in an attempt to block a shot but the referee deemed it to be intentional and handed him the marching orders. Raul de Tomas rose up to the occasion and unleashed a low shot from the free-kick to equalise for Espanyol in the 74th minute.

Raul de Tomas turned from a hero into a villain in the final minute of additional time as VAR showed him to have handled the ball inside the box while trying to clear a corner kick. Carrasco made no error in converting from the spot to hand Atletico Madrid the win.

Celta Vigo scored the first goal of the match in the 11th minute when Iago Aspas’ cross-cum-shot took a wicked deflection off a rival defender to nestle into the back of the net. Celta proved that they can find the back of the net without the element of luck in the 37th minute when Fran Belter’s 40-yard-shot curled into the top corner as the rival’s keeper failed to judge the swerve of the ball.

The scoreline remained 2-0 at full-time with both Athletic and Celta missing gilt-edged opportunities.

In a tale of another Madrid side bagging three points in the dying embers, Karim Benzema scored the winner in stoppage time as Real Madrid beat their third-placed opponents 3-2. However, it was Sevilla who took the lead in the 21st minute through Ivan Rakitic after his free-kick deflected off the wall and left the ‘keeper wrong-footed.

The problems for Real Madrid only compounded in the 25th minute when a scramble in the box led to Erik Lamela through on goal and the Argentinian made the most of the opportunity to bang the ball into an empty net. However, the change of ends saw a reinvigorated Los Blancos.

The intentions were made clear five minutes into the second half when substitute Rodrygo finished off a low cross from Dani Carvajal. Carvajal was in the thick of things in the 82nd minute as well when Nacho Fernandez netted in his cross from the right flank to equalise.

Rodrygo turned into the provider in the 92nd minute when he hugged the touchline and played a back-pass to Karim Benzema and the Frenchman thanked him by elevating the ball into the top corner. 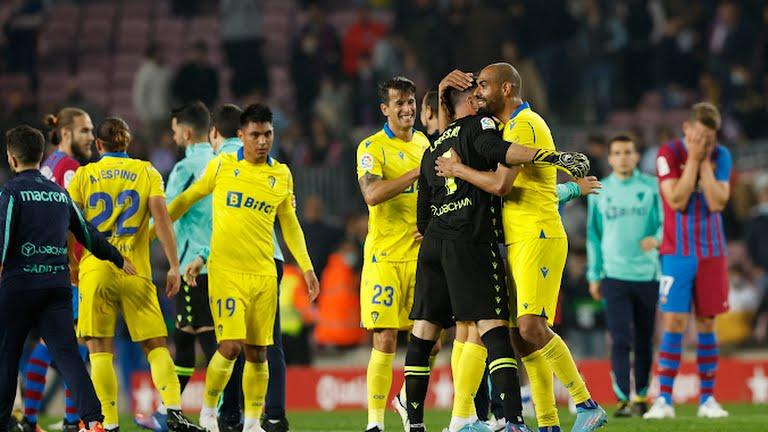 Cadiz scripted history on Monday night by picking up a victory against Barcelona for the first time away from home. Marc-Andre ter Stegen had denied Ruben Sobrino twice from close range but Lucas Perez pounced on the rebound to score the only goal of the contest in the 48th minute.Although Barcelona dominated the possession in terms of possession and number of passes, they were unable to trouble the scorers as their hopes of lifting another La Liga title suffered a massive blow. They have been already knocked out from Europe and it seems that Barca will have to endure a trophyless season for the second time in fourteen years.