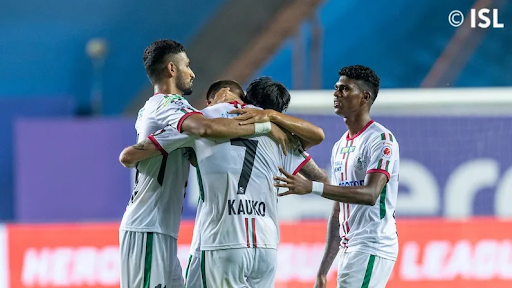 ATK Mohun Bagan miraculously rescued a point in the 2-2 thriller against Kerala Blasters in ‘Match 66’ of the 2021-22 Indian Super League season. David Williams and Joni Kauko were on target for the Mariners, while Adrian Luna netted a brace for the Tuskers.

Kerala Blasters head coach Ivan Vukomanovic made two changes to the team that won 1-0 against East Bengal. Harmanjot Khabra and Marko Leskovic returned to the team after serving their one-game suspension, with Sanjeev Stalin and Enes Sipovic making way for the duo.

On the other hand, ATK Mohun Bagan head coach Juan Ferrando also made two changes to his starting XI. Carl McHugh returned to the midfield in place of the suspended Deepak Tangri, whilst Prabis Das was replaced by Williams.

The Tuskers had a better start to the game and took only seven minutes to break the deadlock from a  fantastic freekick from Luna. Being quite a distance away from goal, the Mariners’ custodian Amrinder Singh was prepared for a cross into the box but the Uruguayan magician went for goal instead, leaving Amrinder and the entire ATK Mohun Bagan defense bamboozled.

However, last season’s runners-up retaliated immediately with a goal in the very next minute. Pritam Kotal received a ball from the deep and made a darting run down the right flank before drilling in a low cross for Williams, who made no mistake in netting the equalizer for Ferrando’s team.

The Tuskers had the opportunity of getting their lead back in the 23rd minute when Jorge Pereyra Diaz went for glory, but Amrinder was alert this time around to avert the danger. He was called into action once again in the 39th minute when Puitea decided to have a go, but the ISL-winning goalkeeper got fingertips to the shot to deflect it to the crossbar.

Pretty much like the first half, Vukomanovic’s team started on the front foot in the second half as well and should have scored their second goal just four minutes after the resumption when a defense-splitting ball was played in for Diaz. Tiri went to clear the ball but failed to get any connection, leaving the Argentine striker one-on-one with Amrinder. However, Diaz went to square the ball for the teammate instead of going for goal and had his pass cut out by a white shirt.

The Platense loanee had a bad day at the office as he missed another gilt-edged chance only thirteen minutes later. He found himself at the end of another through ball and went for goal this time, only to be denied by Amrinder. The rebound luckily fell towards his path and he pulled the trigger yet again, but another brilliant save by the ATK Mohun Bagan keeper kept the scoreline at 1-1.

The Tuskers eventually got their much-deserved goal in the 64th minute, courtesy of a sensational strike by Luna. After receiving a cross from Puitea on the left flank, Luna cut inside to free up space for him before launching a magnificent shot into the top corner, leaving all of Ferrando’s players stupefied for the second time on the night. 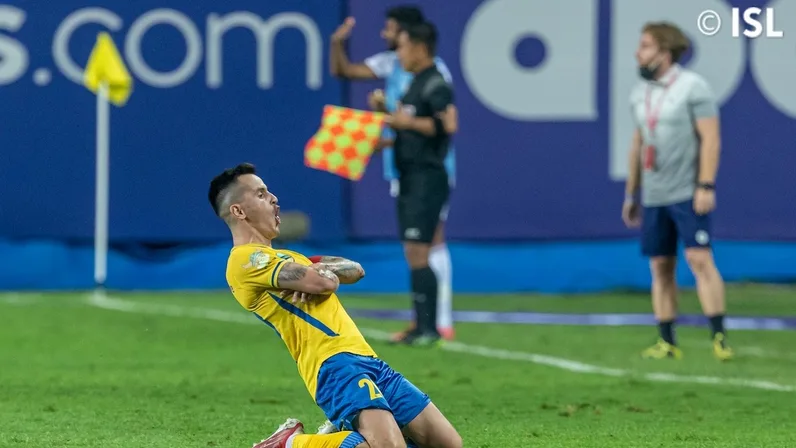 ATK Mohun Bagan came agonizingly close to netting another equalizer in the 90th minute when Manvir Singh’s shot was saved by Kerala goalie Prabhsukhan Gill and the rebound fell to Kolkata Derby’s hero Kiyan Nassiri. However, the youngster had his shot blocked by a yellow shirt. Fueling the fire of an already spicy encounter, Prabir saw a red card a couple of minutes later for a poor challenge on Alvaro Vazquez.

Just as when it seemed that Vukomanovic’s team had done enough to take all three points home, the Mariners delivered the killer blow in the 97th minute of the match. Finnish midfielder Kauko unleashed a venomous effort after receiving a pass from Hugo Boumous and though Gill got a hand to it, the power behind the shot helped the ball find its way into the back of the net.

ATK Mohun Bagan remains in the second position with this draw and will take on Odisha on Thursday while fourth-placed Kerala Blasters will be up against Hyderabad on Wednesday.