Jamshedpur claims pole position with a 3-0 triumph over Hyderabad 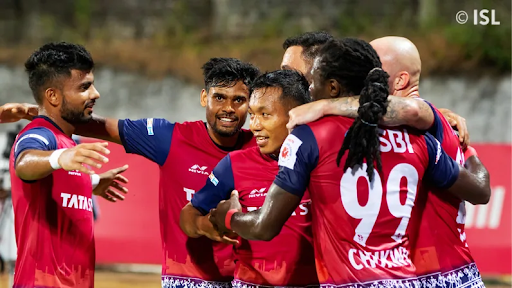 Jamshedpur registered their fifth consecutive victory by handing Hyderabad a 3-0 drubbing in ‘Match 63’ of the 2021-22 Indian Super League season. An own goal by Chinglensana Singh and strikes from Peter Hartley and Daniel Chima Chukwu comprised the three goals scored by the Red Miners.

On the other hand, Jamshedpur head coach Owen Coyle made only one change to his team that won 3-2 against NorthEast United. Brazilian midfielder Alex Lima replaced Greg Stewart, who was serving a one-game suspension.

The Nizams had a calamitous start as Coyle’s men took all but five minutes to break the deadlock. Hartley got his head to a corner from Lima, and while his effort was saved by Hyderabad custodian Gurmeet, the rebound kindly fell for Mobashir Rahman. The midfielder’s shot wrongfooted the keeper and took a deflection off Chinglensana before nestling in the back of the net.

Hyderabad’s first opportunity came in the 25th minute when Mohammad Yasir delivered a cross into the penalty box from a freekick. The red shirts tried clearing the ball but it fell for Akash Mishra, who then laid a pass for Jadhav. The young winger did well to make room for a shot, but his strike only found the side netting.

It turned out to be a costly miss as the Red Miners doubled their lead barely three minutes later. It was almost a carbon copy of the first goal, except that this time, Hartley’s header off a cross from Lima got the better of Gurmeet.

Coyle’s team could have had their third in the first half itself as in the 39th minute, Ritwik Das tried his luck from yet another pass from Luna. However, Gurmeet was up to the task this time around to keep the scoreline at 2-0.

The second half started exactly how the first half did with Jamshedpur dominating the proceedings from the first meeting. In the 52nd minute, Hartley got his head to yet another corner but could not beat Gurmeet since his header was directed straight at the young custodian. 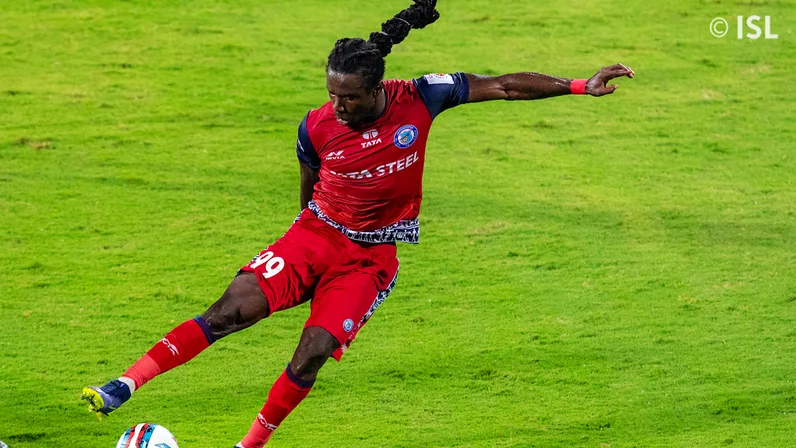 However, they did not have to wait long for their third goal as Chukwu joined the party in the 65th minute, courtesy of a howler from Camara. The Mauritania international tried to clear a ball but could not get any connection, leaving Lima unmarked at the edge of the box. The Brazilian then found Chukwu with a pass and given his current run of form, the Nigerian marksman was never going to miss such a gilt-edged opportunity.

Adding a late twist to the game, Mobashir was given marching orders in the 68th minute for kicking Mishra after being tackled by the full-back. The last chance of the match fell to Marquez’s team in the additional time. Joel Chianese made a darting run down the right flank before finding Siverio with a pass, but the Spaniard’s initial attempt was saved by the Red Miners’ custodian TP Rehenesh. The rebound also fell to the Spaniard’s feet, but this time around, he dragged his shot wide.

With this win, Jamshedpur has not only confirmed their semi-final berth but has also dethroned the Nizams from the pole position. They will now take on Odisha on Friday, whilst second-placed Hyderabad will play their last league stage match of the season against Mumbai City on Saturday.