Mumbai City and Jamshedpur played out a 1-1 draw with the hosts squandering a chance to top the points table. Jamshedpur with this draw gets off the mark in the points table but the search for their maiden win for this campaign continues.

Des Buckingham’s side went ahead early on thanks to Chhangte’s first goal of the 2022-23 Indian Super League season. However, the Red Miners equalised swiftly and left the Islanders frustrated with a point at the Mumbai Football Arena in Andheri at the end of the night.

Apuia was partnered by the dynamic and creative pair of Alberto Noguera and Ahmed Jahouh. Greg Stewart played upfront and was flanked by Lallianzuala Chhangte on the right, who was making his 100th appearance in the ISL with the electric Bipin Singh starting on the left wing.

Aidy Boothroyd put the ever-dependent Rehenesh TP in front of the post with Pratik Chaudhari and Eli Sabia forming the core of the Red Miners’ defense. Ricky Lallawmawma and Laldinliana Renthlei were deployed in the wings in Jamshedpur’s defense.

Wellington Priori and Germanpreet Singh acted as the engine room in the visitors’ midfield with Ritwik Das and Boris Singh Thangjam playing wide. The responsibility to score goals lay in the hands of Harry Sawyer and Daniel Chima Chukwu.

The Islanders started the game well, creating an opening very swiftly early in the game. In the 3rd minute, a counter-attack led by Stewart and Bipin saw the former play the ball to Bipin out wide from the halfway line. The winger carried the ball to the byline and put in an accurate cross to Greg Stewart in the middle, whose header bounced kindly for the Jamshedpur keeper.

The fast start from Mumbai City was a signal of intent. In the 8th minute, the Islanders took the lead through Lallianzuala Chhangte, who scored his first goal of the ongoing ISL season. Noguera and Stewart combined well on the right side of the Jamshedpur box.

Stewart was released into space in the penalty area, he then squared the ball to the centre to find an on-rushing Chhangte who poked the ball in to hand the Islanders a 1-0 lead early on in the game. 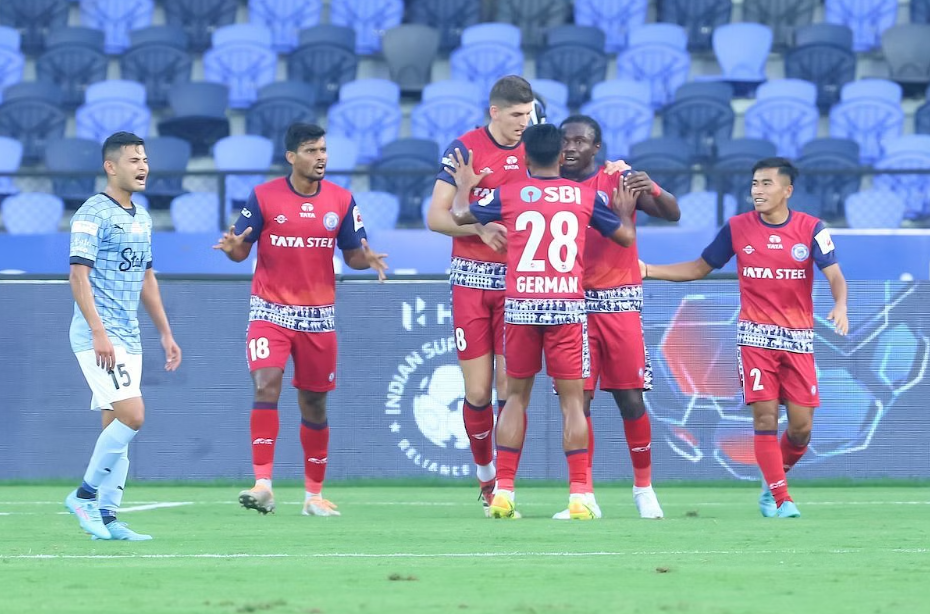 The Mumbai City players were pressing Jamshedpur with ease in midfield and were retaining the ball well from the restart. Jamshedpur was trying to dominate the Islanders physically and against the run of play, the Men Of Steel equalised. A long throw-in by Wellington from the left in the 12th minute was flicked on by Sawyer at the front post. Daniel Chukwu headed the ball in at the far post to draw the game level at 1-1.

After the restart, Mumbai City was back to dominating the ball as Jamshedpur struggled to keep possession. The Islanders were retaining the ball expertly despite tough challenges from Jamshedpur players who were looking to make the match a physical competition.

However, Jamshedpur looked more dangerous going forward in the first half as they were trying to counter the Islanders who were trying to build play to penetrate. In the 28th minute, Wellington managed to intercept the ball in midfield to release Boris on the left wing, who had made his forward. He shot the ball right at Phurba, who parried it away with ease.

The Islanders were dominating the ball but were finding it hard to create clear-cut opportunities in the first half after a frantic start to the game. Soon after the referee blew for half-time as the scores read 1-1 at the end of the first half.

The Mumbai City players looked to start the second half in a similar fashion to that of the first. Jamshedpur’s tactics were clear after the break as they were willing to surrender the ball to the Islanders so that they could use their physically dominant players to counter.

The first chance of the second half came the way of the Islanders in the 50th minute. A quickly taken corner on the left played Bipin into space right outside the Red Miners’ box. He curled the ball trying to find the right top corner but it went straight into the hands of Rehenesh.

Des Buckingham looked to utilise the tactical flexibility of his squad to take the lead as the scores read 1-1. He made the first substitution of the game in the 56th minute when he brought on Vikram Partap Singh for Apuia.

The change soon almost paid dividends as in the 62nd minute Vikram struck the crossbar. Noguera and Stewart combined well on the right to release Chhangte who turned and played the ball into the path of Vikram, who chipped the ball over the Jamshedpur keeper only to strike the crossbar. 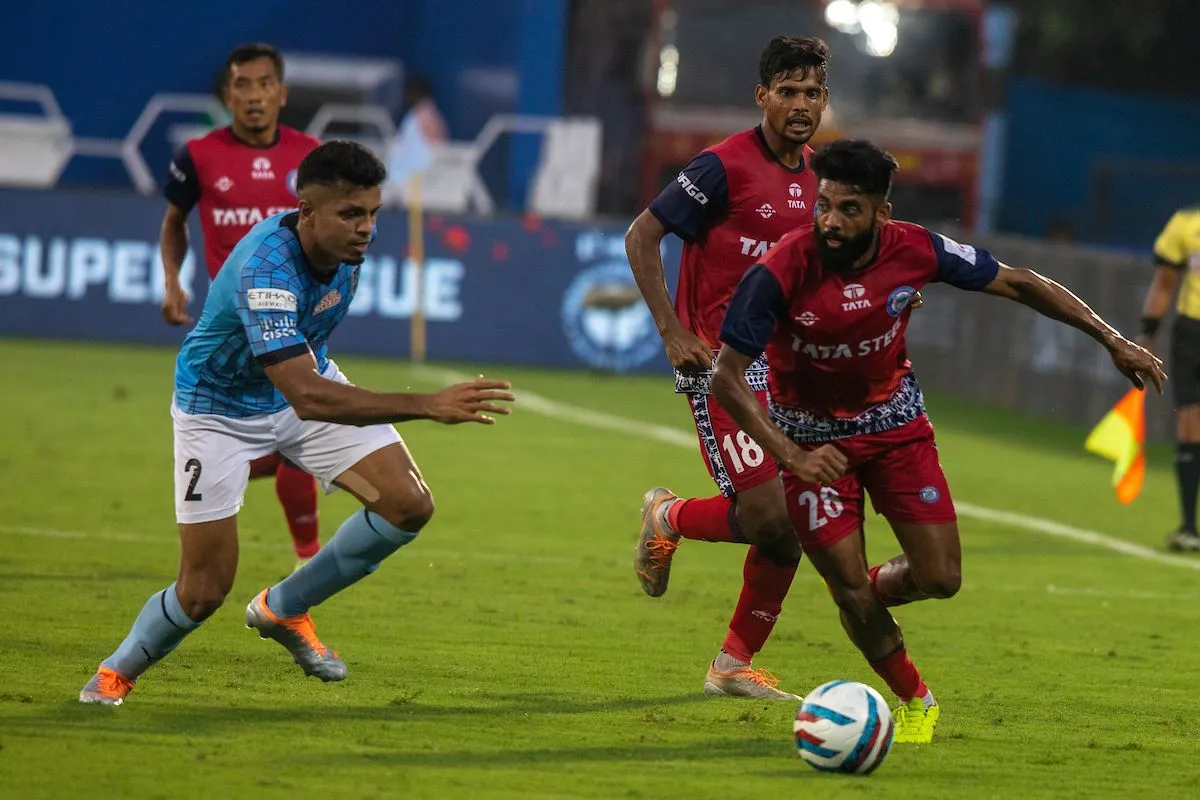 In the 65th minute, Jamshedpur took off Ritwik to bring on Farukh Choudhary. Coach Buckingham made a double substitution in the 67th minute which saw Rowlin Borges and Jorge Pereyra Diaz come on for Jahouh and Chhangte respectively.

In the 71st minute, Jamshedpur made their second substitution of the game as they brought on Jay Emmanuel Thomas for Sawyer to partner Chukwu upfront.

As the game entered the final 10 minutes, Mumbai City kept looking for the winning goal as Jamshedpur looked content with a draw. The scores still read 1-1 as the raucous support at the Mumbai Football Arena was pushing the Islanders on.

Jamshedpur made a double substitution in the 84th minute, as they brought on Laldinpuia for Boris and Ishan Pandita for Chukwu. Buckingham brought on Gurkirat Singh for Bipin in the 86th minute so that Islanders could go all out in attack for that winning goal but in vain.

Mumbai will travel south to face Kerala Blasters in their next game on Friday while Jamshedpur will return home to host NorthEast United on Sunday.