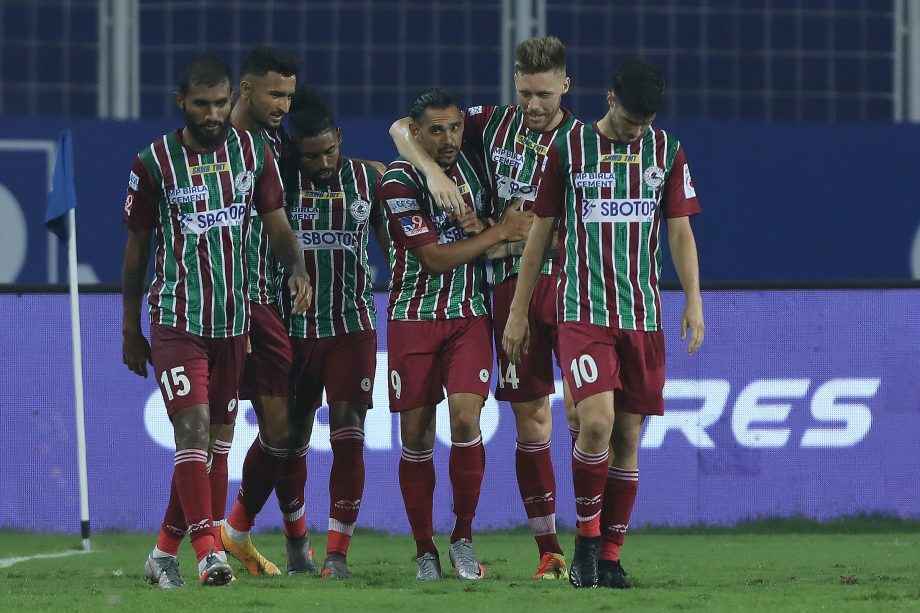 David Williams gave ATK Mohun Bagan an early lead in the first leg of the second semi-final of ISL 2020-21 but substitute Idrissa Sylla scored in the dying seconds of the match to bring NorthEast United level.

The Highlanders coach Khalid Jamil made three changes to the team that won 2-0 against Kerala Blasters with Provat Lakra, Imran Khan, and Deshorn Brown dropping out. Full-back duo of Ashutosh Mehta and Gurjinder Kumar came back into the playing XI with Nim Dorjee moving to midfield and skipper Federico Gallego was also welcomed back into the playing XI for the crucial match.

On the other hand, ATK Mohun Bagan manager Antonio Lopez Habas made three changes to the team that lost 2-0 to Mumbai City in the final match of the league season which costed the League Winners’ Shield and a spot in the AFC Champions League final to the Mariners. The suspended Sandesh Jhingan dropped out along with Tiri and Pronay Halder as Prabir Das, Subasish Bose, and Javi Hernandez were brought in to replace them.

ATK Mohun Bagan completely dominated the first half as Hernandez and Williams took shots from outside the penalty area which ultimately went wide. In the 23rd minute, a brilliant few touches from Roy Krishna in the box allowed him to take a shot at goal but it hit the side netting.

At the half-hour mark, Manvir Singh was sent through on goal but he was under some pressure from Gurjinder Kumar and ended up rifling the ball in the stands from 10 yards.

The Mariners made the pressure count as Krishna laid the pass to his strike partner David Williams who showed fine skills on the ball, completely wrong-footing Nin Dorjee, and then the Australian took a fine shot to beat Subashish Roy Chowdhury in goal.

At the brink of half-time, NorthEast United came close to level the score on the night as an accurate free-kick from Federico Gallego found Ashutosh Mehta whose header clipped off the crossbar as Habas’ side went into the break with a slender lead.

The second half was a much more cagey affair as Antonio Lopez Habas instructed his team to sit back and defend as the Mariners wanted to go into the second leg at the Fatorda Stadium on Tuesday with a lead in hand.

In the 49th minute, A controversial moment arose when Arindam Bhattacharja came rushing out of the goal and took out Luis Machado and the referee decided against punishing the goalkeeper which was correct as no evidence pointed to a foul in the replays.