The Nizams stay unaffected by the attacks of the Blues!

Hyderabad overtakes Mumbai City to claim the table-toppers crown of the Indian Super League with a thumping triumph over the 2018-19 champions Bengaluru on the final scoreline of 3-0.

Skipper Bartholomew Ogbeche (26′) and Joel Chianese (90′) graced the scoresheet while Sandesh Jhingan had to bear an own goal (44′) under his name. West Block Blues who turned up in large numbers at Sree Kanteerava Stadium to support the Blue knights returned from their fortress heavy-heartedly.

Hyderabad made three changes from their last Starting Seven to hand the domestic rising stars Rohit Danu and Nim Dorjee Tamang their first start of the season. Club’s all-time top-scorer Bartholomew Ogbeche led the Nizam unit onto the battlefield in place of the Brazilian midfielder Jaoa Victor who could not make it to the matchday squad due to fitness concerns.

Meanwhile, the BFC gaffer Simon Grayson named an unchanged lineup with an aim to sustain their positive momentum furthermore.

The visitors kick-started the play by donning their traditional yellow outfits against the all-blue home side in front of passionate West Block Blues as spectators. The Nizams initially seemed a bit sloppy in the defense which resulted in the opposition receiving multiple chances early on the clock. Bengaluru attempted the first corner of the match inside the first five minutes while one of their attacking moves was also snubbed off as an offside.

The visitors responded to the early raids with befitting counter-attacks through long balls which were beautifully cleared off by Sandesh Jhinghan. However, the former HNK Sibenik central defender was also penalized in the 16th minute with a yellow card for his sliding challenge on Javier Siverio from the back. The Blues were seen targeting the 25-year-old Spaniard with continuous challenges in order to block the ball supply towards Ogbeche. 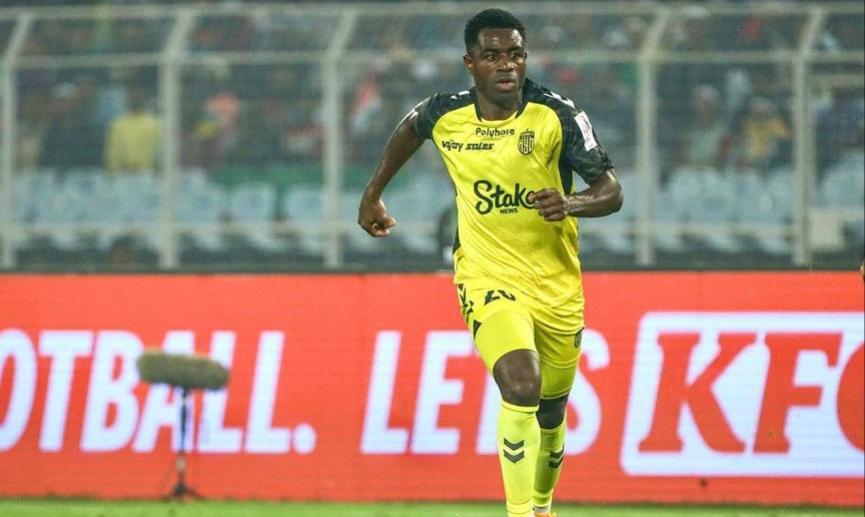 Another such foul from Suresh Wangjam on Siverio right on the edge of the box resulted in the home team conceding the first goal of the game. Instead of going for a direct free-kick, Ogbeche shared a short pass with Halicharan Narzary to outwit the standing Blues’ wall and set up a perfect pathway for his strike. The 38-year-old Nigerian striker made no mistake in delivering it into the back of the net and ending his long-standing individual goal drought.

We witnessed many heating moments between the players and coaches of both sides as the consequences of the maiden goal. It boosted the confidence of the Telangana-based roster which was quite visible through their movements on the battlefield.

Just when the Blues were pushed down for a half-time break, Ogbeche gave another heartbreak for the home crowd to double their lead. The move was initiated with a clearance error by the Bengaluru defender which was quickly followed by another beautiful link-up between Ogbeche and Narzary for the second goal of the day. However, the goal was later ruled on as an own goal owing to a tiny deflection from Jhingan on the goal line.

Despite getting a fiery start, Grayson and his boys reverted back to their gear and started playing from the back with a lessened press on the ball. The attacking unit of the visitors only managed to create very few chances in the first half however, their offensive knights capitalized on them very well.

Grayson’s move of making three changes for the second half was a speculated one as the English gaffer was unhappy with his team’s approach in the first 45 minutes. The Brazilian central defender Alan Costa and Spaniard Pablo Perez were subbed on while Udanta Singh was also brought on to add more pace to the play.

In search of his hat-trick goal, Bart attempted a thundering strike which was trampled down by Gurpreet Singh Sandhu with a powerful save. It was followed by a quick counter-attacking move from Sandhu’s teammates driven by Roy Krishna who could not backtrack it properly and was cleared off by Nim Dorjee through a blocking interception.

Newly arrived players from the Bengaluru camp brought a breath of fresh air for the Blues however, their diligent efforts resulted in nothing but a deadlock. The lack of sparkling finish and coordination between attackers was the key reason behind their trailing circumstances in the game. Manuel Marquez Roca also came up with triple changes to protect their lead and robust commanding position for the final 20 minutes on the clock. 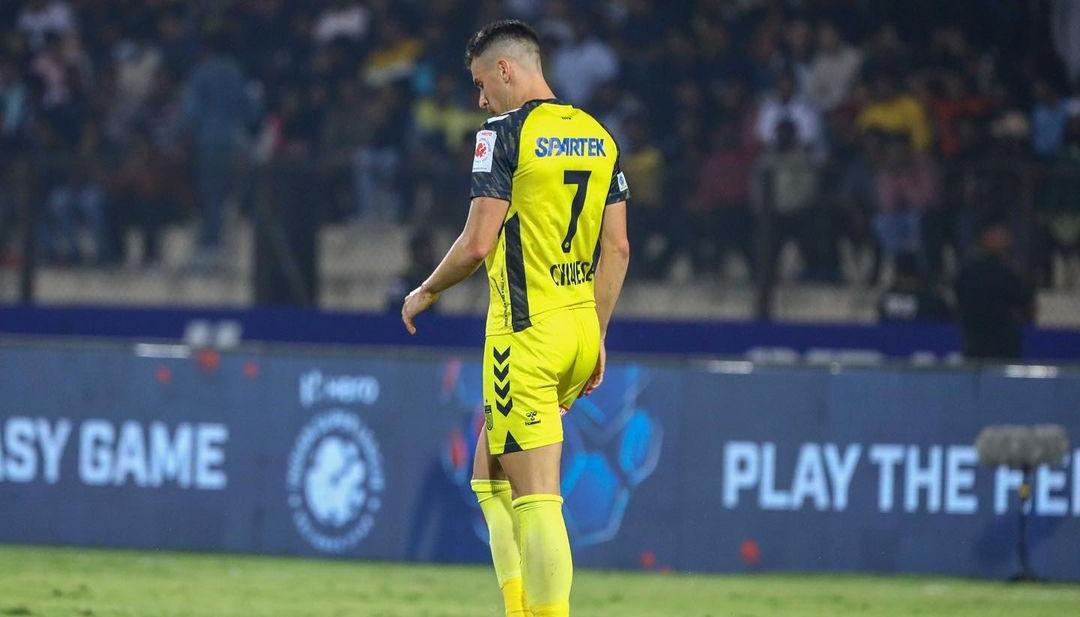 The referee spotted Hyderabad goalkeeper Gurmeet Singh taking unnecessary time for a free-kick attempt and showed him a yellow card for wasting crucial game time in the 82nd minute.

The Nizams finally inserted the cherry on the top with their third breakthrough In the final moments of the play when youngster Abdul Rabeeh’s brilliant run and cross met with a clinical finish by Joel Chianese. And then the full-time whistle was blown by referee L. Priyobarta Singh on a final scoreline of 3-0 in the favor of the Yellow and Blacks.

It was the third defeat of the season for the champions of the 2018-19 edition at Sree Kanteerava Stadium as the Blues are not able to capitalize on home conditions properly. The failure of their key players such as Sunil Chhetri, Roy Krishna, Danish Farooq, Jovanovic and Sandesh Jhingan was the biggest reason behind a forgettable outing for the Blues in Christmas Week. The emerging star Sivasakthi Narayanan once again made an impressive cameo appearance and is presenting a serious contention for the Starting Eleven.

On the other hand, it was a perfect day at the office for Hyderabad gaffer Manolo Marquez and his boys away from home. The Nizams completed their hat-trick of wins and also stood by their incredible record of not losing after taking an early lead this season. The 27-year-old Sikkimese defender Nim Dorjee who replaced Chinglensana Singh in the central defense went on to play a pivotal role in a memorable triumph.

The table-toppers Hyderabad side will be travelling to the northeastern part of the country to challenge the bottom-placed NorthEast United in their forthcoming fixture on Thursday. Meanwhile, the Bengaluru camp will be moving to the City of Joy to summon the East Bengal side at Salt Lake Stadium in search of their second away victory of the season next Friday in the last match of the 2022 calendar year.