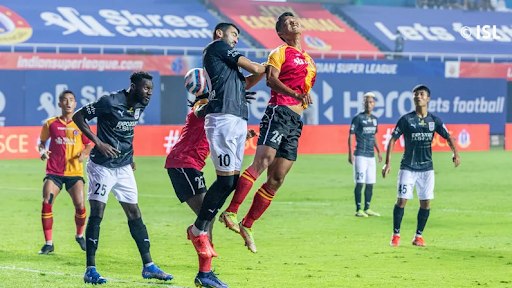 Both sides lacked a clinical edge in the final third

East Bengal almost pulled off a David vs Goliath as the basement boys restricted defending champions Mumbai City to a goalless draw in ‘Match 52’ of the 2021-22 Indian Super League season at the Tilak Maidan Stadium on Friday.

The Red and Golds interim head coach Renedy Singh played Amarjit Singh Kiyam as a right-back in this match, while Joyner Lourenco partnered Adil Khan in what was an all-Indian backline with only Daniel Chima Chukwu starting alongside 10 Indian players.

On the other hand, Mumbai City head coach Des Buckingham replaced his goalkeeper Mohammed Nawaz with the former Real Kashmir custodian Phurba Lachenpa after the former conceded four goals in the last match against Odisha.

As many would have expected, the Islanders had the better start and Igor Angulo had the first real opportunity in the 9th minute but his header was easily gathered by the East Bengal custodian Arindam Bhattacharya. The Red and Golds’ first chance fell to Chima Chukwu four minutes later but his effort was just a whisker away from the target.

The Islanders got another opportunity to break the deadlock just before the half-hour mark when Hira Mondal completely misjudged an Amey Ranawade throw and overran it. However, he instantly redeemed himself with a fantastic sliding tackle to block Ranawade’s pass for a corner.

The second half saw Renedy bring on Mohammed Rafique in place of Bikash Jairu to add more guile and energy to the flanks, but once again, the early opportunities fell to the Islanders. There were calls for a penalty just six minutes after the resumption when Cassinho claimed that he was brought down inside the box by Adil Khan but his claims and prayers landed on deaf ears. 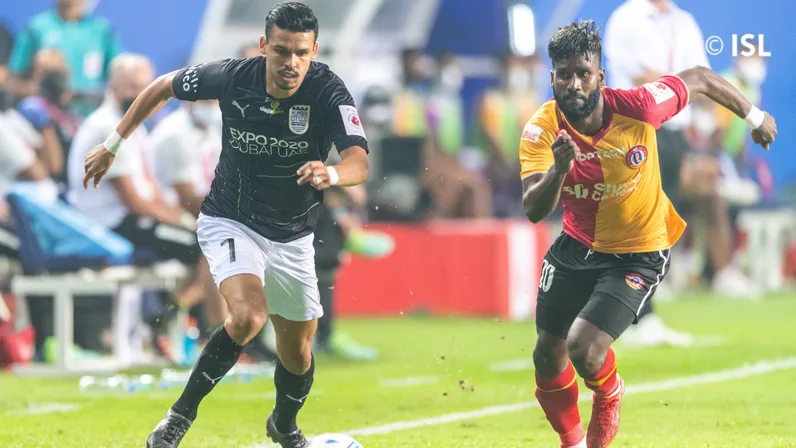 Five minutes before the hour mark, the Brazilian was in the thick of things once again as he pulled the trigger from the edge of the box. While his shot had power, it was directed straight at Arindam who chose the safer option and pushed it away for a corner.

Buckingham tried to inject fresh legs by introducing the winter transfer window acquisition Vinit Rai while Ygor Catatau was also brought on to add more threat in attack for the Islanders. Renedy was quick to respond as the former NEROCA head coach introduced Darren Sidoel to add more stability to East Bengal’s midfield.

However, with none of his substitutions really having any effect on the complexion of the game, Buckingham played his last card by introducing Brad Inman. The last quarter saw both teams trying to cancel each other out with Ahmed Jahouh’s yellow card offense being perhaps the only noteworthy moment as the Moroccan midfielder will now be suspended for the next match for having picked up four yellow cards. Both sides had a few half-chances, but given the lack of clinical edge, the elusive opening goal never arrived.

Despite the draw, Mumbai City has reclaimed pole position and will take on Bengaluru in their next assignment at the Fatorda Stadium on Monday.

On the other hand, East Bengal is still occupying the bottom position in the league standings but they have brought the gap between themselves and the tenth-placed NorthEast United to only two points. The Red and Golds will now square off against Jamshedpur at the Athletic Stadium on Tuesday.