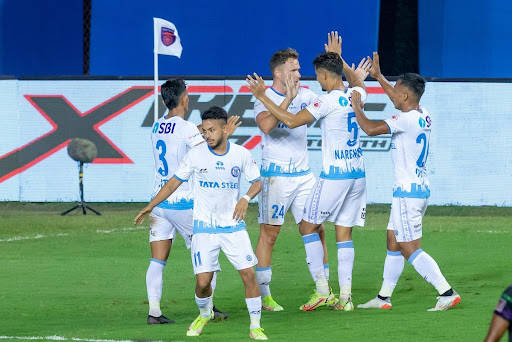 Greg Stewart scored the first hat-trick of the 2021-22 Indian Super League season as Jamshedpur routed Odisha with a dominating 4-0 scoreline at the Tilak Maidan in Vasco.

Odisha head coach Kiko Ramirez made a few surprise changes to his starting lineup after winning 3 of their first 4 matches as star player Javi Hernandez was on the bench along with Liridon Krasniqi, Gaurav Bora, and Daniel Lalhlimpuia with the quartet of Jonathas, Victor Mongil, Paul Ramfangzauva, and Jerry Mawihmingthanga returning to the starting XI.

On the other hand, Jamshedpur head coach Owen Coyle made only three changes to his team despite losing 4-2 to reigning champions Mumbai City in the last fixture. Star striker Nerijus Valskis, Seiminlen Doungel, and Narender Gahlot replaced the outgoing trio of Eli Sabia, Ishan Pandita, and Pronay Halder.

The Red Miners skipper Peter Hartley started off the proceedings quite early in the evening as he scored the first goal of the match by heading a perfectly delivered corner by Stewart into the back of the net in the 3rd minute.

Jamshedpur doubled their lead in the very next minute as Stewart fired a curling shot from distance in the top right corner of the Odisha goal to make it 2-0. The strike from the former Rangers forward was swirling in the air and Kamaljit Singh could just be a witness as the ball flew past him into the net.

Stewart was in the thick of things as he marshaled the Jamshedpur attackers and kept the Odisha defense on their toes throughout the first half. The Scottish striker earned a free-kick off a Vinit Rai foul which allowed him yet another opening to double his tally on the evening. A stunning curler from the set-piece went past the Odisha wall and found the back of the net past a diving Kamaljit Singh as Jamshedpur made it 3-0 before the clock struck the 21-minute mark.

Shots from Jonathas and Jerry went wide as the Juggernauts attempted to bounce back on a dismal night. Jamshedpur almost made it 4-0 in 30 minutes as Nerijus Valskis made a deafening solo run in the Odisha midfield to open up space for himself and shoot but the Lithuanian’s shot was well wide of the target. 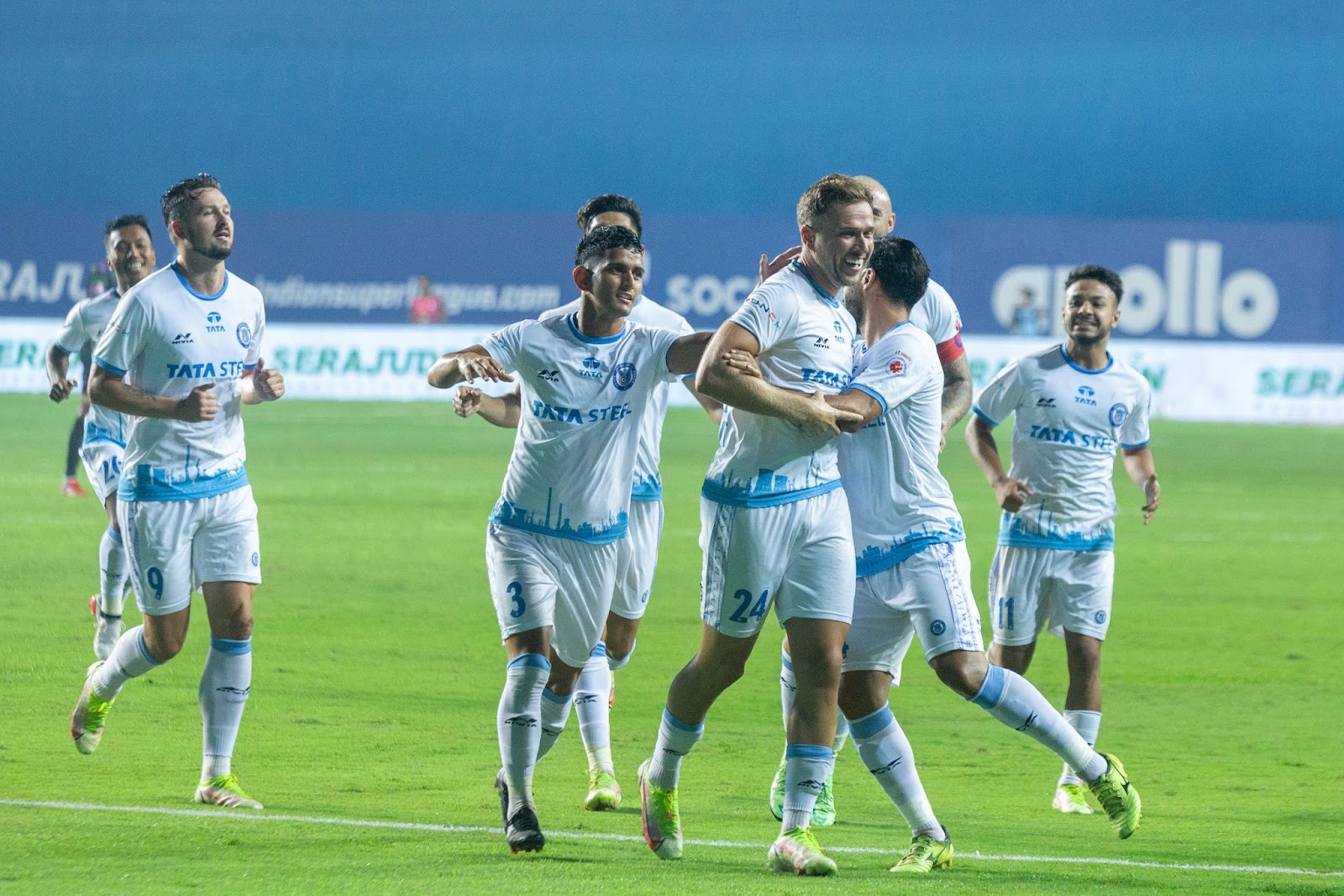 Greg Stewart celebrates his hat-trick with his Jamshedpur teammates

Stewart got his hat trick as he scored the fourth goal for his side in the 35th minute. The 31-year old striker took on a couple of Odisha defenders before producing a brilliant finish using his weaker foot. The Scotsman scored the first hat-trick of the ongoing league season completing the feat in just over half an hour.

Coyle’s men had a penalty shout turned down by the referee as Stewart was brought down with a half-hearted challenge by Lalruathara in the penalty area at the end of the first half as Jamshedpur went into the half-time break with an unassailable 4-0 lead.

Jitendra Singh and Valskis had a go at goal from a set-piece for Jamshedpur’s fifth goal in the 53rd minute but Odisha successfully manage to keep their lines clear this time around by throwing bodies on the line.

In the 67th minute, Ramirez’s men came close to netting a consolation goal as a long-range volleyed attempt by substitute Lalhrezuala Sailung was saved by TP Rehenesh at the near post.

Jamshedpur substitute Boris Singh made a brilliant solo run down the right side and missed the target by whiskers as his shot for the far corner went on the wrong side of the goal-post from a tight angle in the 70th minute. Three minutes later, Boris then floated in a cross from the right to find Valskis inside the box who headed it wide and failed to score in yet another outing.

Jonathas and Valskis headed wide from set-pieces at either end of the pitch in additional time as the game ended 4-0 for Jamshedpur handing the second place in the league standings to Jamshedpur with 11 points from 6 matches while Odisha is in fourth with 9 points from 5 fixtures so far.

The Red Miners will now face Bengaluru on Monday after a breather for the squad whilst the Juggernauts play two-time ISL champions Chennaiyin on Saturday.