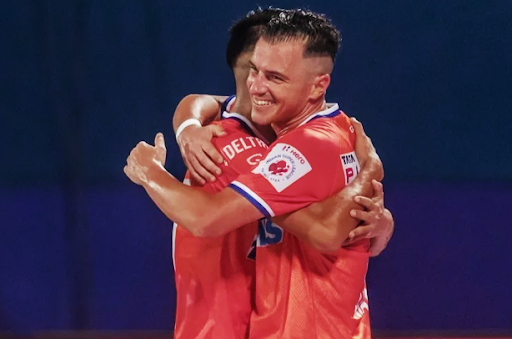 Kerala Blasters wrote a mind-boggling climax by scoring two clutch goals in the last three minutes of the clash. Spaniard striker Airam Cabrera hit his first Indian Super League career hat-trick after coming from the substitute bench of Goa at the GMC Athletic Stadium on Sunday.

Both head coaches made a hefty amount of changes in their Starting 11 as the game was dead-rubber and it had no significance on the qualification scenario. Kerala gaffer Ivan Vukomanović made four changes from the winning lineup against Mumbai City as Enes Sipović and Rahul KP returned to the action while Chencho Gyeltshen also received a start.

On the other hand, the Goan lineup had seven fresh faces for their last game of the 2021-22 ISL season. Hrithik Tiwari was handed a start in goal while Leander D’Cunha and Anwar Ali came into the three-man defense. Skipper Edu Bedia, Brandon Fernandes, Muhammed Nemil, and Sanson Periera were also handed starts.

An error from the youngster Ali was well-utilised by the Kerala midfielder Sahal Abdul Samad who made a low cross to Jorge Pereyra in the box. Pereyra got the work done for Blasters as the Tuskers took an early lead in the 10th minute of the match.

In the 25th minute, Chencho found himself in a one-on-one situation with goalkeeper Tiwari where he could open his goal-scoring account. But the Bhutanese striker was brought down by Hrithik who was shown a yellow card by the referee while Blasters were rewarded with a penalty.

It was followed by a cool and calm finish by Pereyra from the penalty spot to double the lead of the visiting side. The Argentine striker barges into the list of Top 10 highest goalscorers of the season with his eighth strike into the net. And the action of the first half concluded on a 2-0 scoreline in favour of Blasters.

Goan interim coach Derrick Pereira brought Cabrera in place of  Nemil at the resumption of the second half and the substitution changed the whole game for the Gaurs. The 34-year-old former Cádiz forward went on to score his first hat-trick on Indian soil. His tally of three goals consisted of two from open play (49′ & 82′) and one from the penalty spot (63′).

Substitute defender Aiban Dohling also placed his name on the scoresheet with the assistance of another central defender, Anwar Ali. Goa was in a leading position at this point after kick-starting the second from two goals behind. The high-voltage contest entered into the last minutes on a 4-2 scoreline favouring the Gaurs. 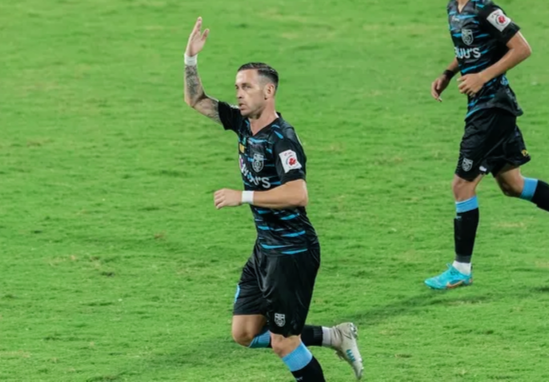 Just six minutes later from the hat-trick completion of Cabrera, Vincy Barretto’s beautiful strike cut down their lead to just one goal. The game was full of twists and turns but the final twist brought everyone to the edge of their seats when Alvaro Vazquez scored a last-minute minute equaliser to level the things off.

Finally, the full-time whistle was blown by the referee Aditya Purkayastha concluding the rollercoaster ride where we witnessed an eight-goal saga. Cabrera received the Hero of the Match award for his cameo which will be remembered by the ISL fraternity for a long time. Apart from the goal contribution, the Spaniard also completed 28 touches and 17 successful passes in a short span of 44 minutes.

The result leads Goa nowhere as the Gaurs finish their campaign in 9th position with 19 points from 20 fixtures. A midway departure of Juan Ferrando slandered their plans for the 2021-22 season as the Gaurs failed to qualify for the Semi-Final round for the first time since 2016. It will be only the second instance when FC Goa won’t be among the Top 4 finishers of the points table.

Blasters will be eying on the final league stage game of the season between ATK Mohun Bagan and Jamshedpur FC to see whom they clash in the semifinal round. The Tuskers have qualified for the semifinal round twice before this season and ended up as runners-up on both occasions hence the expectations of Manjappada from the men in yellow will be sky-high.