Goa is still alive in this competition

Goa thrashed Chennaiyin by a 5-0 margin in ‘Match 86’ of the 2021-22 Indian Super League season to keep their semi-final hopes alive. Jorge Ortiz returned to the team in spectacular fashion as he scored a brilliant hat-trick after Makan Chothe broke the deadlock, while the other goal was a Narayan Das own goal.

Chennaiyin head coach Bozidar Bandovic made two changes to the starting eleven from the previous match. Deepak Devrani was brought in defense to allow Ariel Borysiuk to switch back to his midfield role, while Mirlan Murzaev replaced Nerijus Valskis upfront and paired up with Lukasz Gikiewicz.

The Gaurs were at a different level right off the blocks and Chothe opened the scoring in only the 6th minute. Edu Bedia started the buildup and played a ball out wide for Aiban Dohling, who then whipped in a great ball inside the penalty box which found Chothe. The youngster smashed a volley past Debjit Majumder in the Marina Machans’ goal.

To pile up Chennaiyin’s misery, Ortiz doubled their lead in the 20th minute. Aiban was involved yet again as he played another ball in the penalty area. Chothe overran the pass but it eventually fell for Ortiz, who wriggled past Narayan Das before finding the back of the net.

Six minutes later Aiban Dohling had the opportunity to get into the scoresheet but he was denied by the Chennaiyin custodian. Bedia whipped in a precise cross that found the head of the Gaurs’ defender, but Majumder was up to the task of thwarting the danger.

Goa’s onslaught continued and in the 35th minute, Alberto Noguera got the ball outside the box and went for glory, but his ambitious effort from distance took a deflection and was easily claimed by Majumder.

However, that miss became inconsequential six minutes later when Ortiz netted his second and this team’s third goal. Noguera evaded a few blue shirts before playing a chipped ball for Ortiz, who was at his lethal best.

Four minutes later, Noguera found himself in a dangerous area once again and delivered a curling cross into the box, which caught Bandovic’s defenders off-guard. Narayan made a desperate attempt to clear the danger away with Ivan Gonzalez lurking inside the box, but instead, he ended up heading it into his own goal. 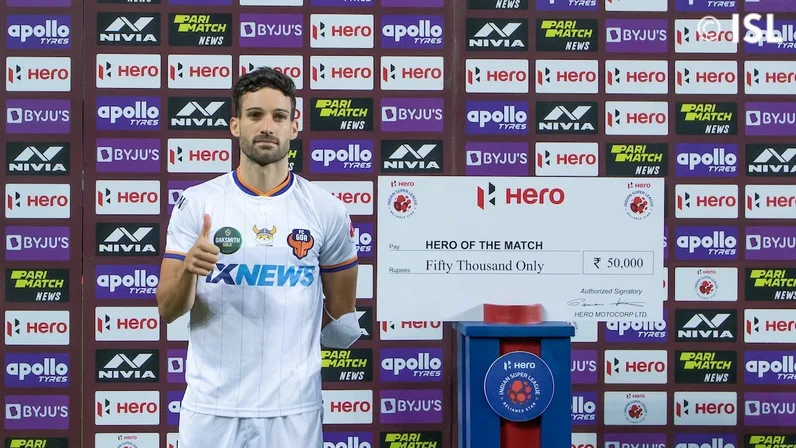 The second half saw Bozidar Bandovic bring in fresh legs in the form of Edwin Sydney Vanspaul and Reagan Singh, and the latter change almost had an immediate impact. In the 48th minute, Reagan wriggled past a couple of defenders before Murzaev in space, but the Kyrgyz attacked took too much time to get his shot away as Goa’s defenders averted the danger.

Ortiz completed his hat-trick in the 53rd minute when Aiban was once again heavily involved in the buildup. After outmuscling a few blue shirts, Aiban played a pass for the former Real Oviedo player who came up with a brilliant finish to beat Narayan at first and then Majumder.

Goa remains in the ninth position even with this win, but it has provided them with a glimmer of hope. The Gaurs will now face ATK Mohun Bagan on Tuesday, whereas the eighth-placed Chennaiyin will look to bounce back against Odisha FC on Wednesday.