The Gaurs were clinical in every department

Goa’s four-match winless streak in the 2022-23 Indian Super League season finally came to an end, as they handed Kerala Blasters a 3-1 defeat here at the Jawaharlal Nehru Stadium in Goa. Iker Guarrotxena, Noah Sadaoui, and Redeem Tlang were on the scoresheet for the Gaurs, while for the Tuskers, Dimitrios Diamantakos was the lone scorer.

After his team was held to a disappointing 2-2 draw by last boys NorthEast United in the previous match, Goa head coach Carlos Pena made one change to his starting XI. Youngster Devendra Murgaonkar was handed a start in this match, with Tlang dropping to the bench.

On the other hand, Kerala Blasters coach Ivan Vukomanovic made three changes to his team after being handed a 0-4 drubbing by Mumbai City. Sandeep Singh, Nishu Kumar and Saurav Mandal featured from the start, with Harmanjot Khabra, Jessel Carneiro and Rahul KP making way for them respectively.

The first few minutes of the game did not produce any clear-cut chances, as both teams struggled to get a hold of the proceedings. Edu Bedia did try his luck from a free-kick, but it was blocked by a player in black.

The first major chance of the game came in the 15th minute. After receiving a ball from Anwar Ali, Sadaoui made a darting run down the left flank before putting a cross into the box, but Guarrotxena could not get his head to it.

The Tuskers had to wait a while to get on the attack, but they got half a chance in the 24th minute when Mandal launched a cross into the box. Nishu did well to get his head to it, but could not generate any power to trouble the Gaurs’ goalkeeper, Dheeraj Singh Moirangthem.

The balance once again tipped in Goa’s favour before the half-hour mark, with Sadaoui creating all sorts of trouble for Vukomanovic’s defenders. The Moroccan trickster tried his luck from distance, but his attempt was saved by Kerala Blasters’ custodian, Prabhsukhan Gill.

However, the endless attacks eventually paid off as the hosts got a penalty in the 32nd minute. Young midfielder Mandal tripped Brandon Fernandes inside the box, and from 12 yards out, Guarrotxena made no mistake in opening the scoring for his team.

Only three minutes later, the Gaurs had a gilt-edged chance of adding to their advantage when a through ball from the deep split opened the Tuskers’ defense. Gill tried to help his team out with a timely outing, but it almost turned fatal as Sadaoui managed to evade the keeper’s challenge. However, it did not produce anything significant, as his shot was blocked by a Kerala defender.

However, the Moroccan finally had his moment under the sun in the 43rd minute. Anwar played yet another delightful through ball from the deep, which yet another had the entire Tuskers’ defence rattled. Sadaoui found himself at the end of the pass and then did well to place his shot past a helpless Gill.

The Tuskers had a good start to the second half and it took them only six minutes to reduce the deficit. Adrian Luna launched a precise cross from a free-kick which could Diamantakos unmarked in the box, and the Australian striker made no mistake in guiding his head into the back of the net. 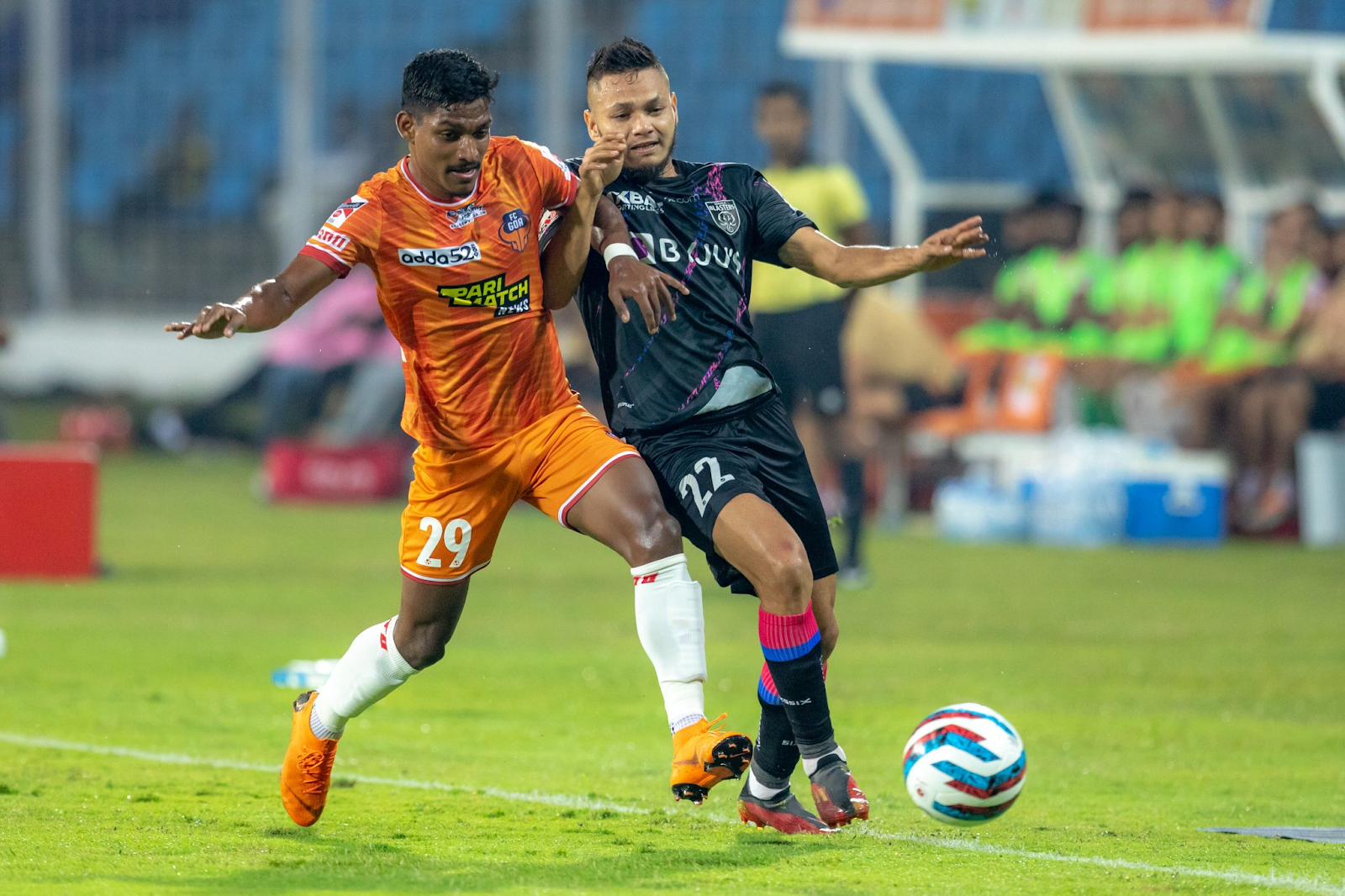 Having got a goal back, Kerala Blasters threw the kitchen sink at Goa to get the elusive equaliser, but against the run of play, the Gaurs once again restored their two-goal advantage.

Bedia laid a head for Fernandes, who then did well to find Tlang on the right flank with a measured pass. The onus was then on the winger to get his name on the scoresheet, and despite falling down while taking the shot, he still somehow managed to be successful in his attempt.

In the 75th minute, centre-back Ruivah Hormipam took the responsibility of getting his team back on his shoulders and went for glory from a long way out. However, his attempt was nowhere near on target.

Vukomanovic opted for ‘Plan B’ by injecting fresh legs and it almost worked out as the 21-year-old winger Nihal Sudeesh had a good attempt in the 79th minute but the Kochi-born player’s shot was saved on the line by Sanson Pereira.

Three minutes later, the Gaurs almost scored their fourth when former Kerala Blasters striker, Alvaro Vazquez found Sadaoui with the pass. However, the Moroccan could not add to his tally having scored earlier on the night. It turned out to be the last chance of the game, as the Tuskers could not come up with anything in the last few minutes.

With this win, Goa climbed to the fifth position with 23 points from 15 matches. They will now take on East Bengal on Thursday while Kerala Blasters, who remain third with 25 points from 14 matches, will take on NorthEast United on Sunday.