Arsenal will host FC Bodø/Glimt in the UEFA Europa League group stage match at the Aspmyra Stadium. The fixture will take place on October 14, beginning at 22:15 IST.

Last season, Bodø/Glimt secured their second successive Norwegian league title, which allowed them to enter the UEFA Champions League qualifiers. However, in that event, the team failed to progress to the group stage, as the Yellow-Blacks unexpectedly failed to defeat Zalgiris.

As for now, FK Bodø/Glimt share second place in their quartet in the Europa League, with four points from three games, while Philips Sport Vereniging have the same number of points and a game in hand.

It’s worth mentioning the special bond between the Norwegian club and the fans. Despite the fact that the Superlagett conceded two goals rather quickly from the superior Arsenal and thus lost their chances of getting a positive result, the fans of the Yellow Horde were fervently supporting their favourites throughout the game till the last second.

Judging by such a massive support, it comes as no surprise that Kjetil Knutsen’s side have been producing some astonishing results at the Aspmyra Stadium. As for instance, Lightning’s home winning streak in European competitions already amounts to 14 games.

Now, the tremendous vociferous support could prove to be a strong argument for FK Bodø/Glimt to fight for second place in the group, since two of the three remaining games will be played in Norway. The game with PSV is likely to be decisive for the Norwegians, and luckily it will take place in Bodø. The Scandinavians will benefit from the fact that the most difficult matches for the lads of Ruud van Nistelrooy are just ahead, which means that in addition to the head-to-head game for second place they will have to face the monstrous Arsenal twice.

It’s also worth bearing in mind that Bodø may well decide to throw all the resources at getting as far in the Eurocups as possible. The fact is that in the domestic arena, the team are second after 25 rounds of the current Elitserien championship. And that is the most they could achieve this season, as they are 15 points behind leaders Molde, while their two opponents are stepping on the heels being just a point behind. The club beat Sandefjord 4-1 at home in the last round and they need to beat two teams from the lower part of the table to ensure they stay in the Eurocups – a task that is more than feasible.

Despite having managed to score 4 goals in two successive matches in the Norwegian league, the unreliability of their defence has been curtailing the efforts of their attacking line this season. In comparison, the former club of Erling Haaland and Ole Gunnar Solskjær have conceded just 21 goals in 25 games, while the lads from Bodo have conceded 32, or 1.28 goals per game.

Their last clean sheet game dates as far back as 27 August. That’s what Arsenal, who have a very bloodthirsty attack led by world-class Gabriel Jesus, are hoping to take advantage of.

The home side will again be missing long-serving Sondre Fet and Gaute Höberg Vetti due to knee injuries. However, all of the players who featured in the FK Bodø/Glimt starting line-up in London are ready for the second meeting with Arsenal.

The start of the group stage started on a major note for the Gunners as they won both games, thus landing in first place. Remarkably, the team conceded just once. But this is exactly what everyone expected from the Londoners. Arsenal are having a splendid season, and in addition to their dominance in the second-tier club competition, they are also topping the table in the domestic arena, the English Premier League.

The Gunners are now on a frantic run and approach the 4th round of the Europa League group stage after picking up 24 out of a possible 27 points in England. Arsenal fans have been waiting for years for such high-quality and fruitful football and now this team is something that is really interesting to follow, even for the neutral fans. The Spanish coach has perhaps managed to resurrect the exact DNA that Arsène Wenger has long been maintaining.

It is the attacking and cutting-edge style of football that makes it interesting. Arteta’s team attack vigorously: they have scored 23 goals in nine appearances in the English league and five in two games in the Europa League (the game against PSV was postponed due to the death of the Queen of England). On average, Arsenal are scoring 2.5 goals per game. And the London side have scored at least three goals in six of their 11 games in all competitions, figures which they have achieved in their last four as well. The numbers are staggering, especially for those spectators who remember the previous couple of years of suffering for the Red-Whites.

After beating previously unbeaten Tottenham Hotspur in the derby, the last game against Liverpool (3-2) made all the critics finally believe that Arsenal are currently one of the best teams in the world. In an uphill battle, Jurgen Klopp was finally defeated. And such a kind of benchmark gives a lot of confidence, as Arsenal had scored 0 goals in 6 previous consecutive head-to-head games!

Remarkably, even while leading the scoreline, the Red and Whites controlled the game perfectly, intelligently crushing the Scousers’ pressing and constantly trying to escalate using their passing game as a lulling. And the Reds, despite losing, were literally afraid to be too aggressive, wary of lightning-fast counterattacks.

After such a demanding match, we should definitely expect a massive rotation in the upcoming encounter. Were it not for the injuries to Mohamed Elneny and Emile Smith-Rowe, the Arsenal coach would have been expected to change the starting line-up against Liverpool completely. And still, even against the second team with a couple of starters, the Norwegians are unlikely to pick up even a single point.

A week ago, Arsenal did not play with their most competitive squad, but pulled out a confident 3-0 home win.

Statistical preview of the match FK Bodø/Glimt vs Arsenal:

“We have the privilege of playing such games. We have to learn from the last match and I will say it again: we are facing one of the best teams in Europe. They beat Liverpool at the weekend. We will have an answer about where we stand tomorrow.”

“They have got individuals who are really good players. They do the job for each other. They are a team. They have the right intensity and the mentality. They don’t do anything halfway. They are all professionals. It’s the opponent who gets the job done every time.”

“But I think we have everything we need to win which is proved by some statistical indicators. The important thing is that we dare to be the best version of ourselves.” 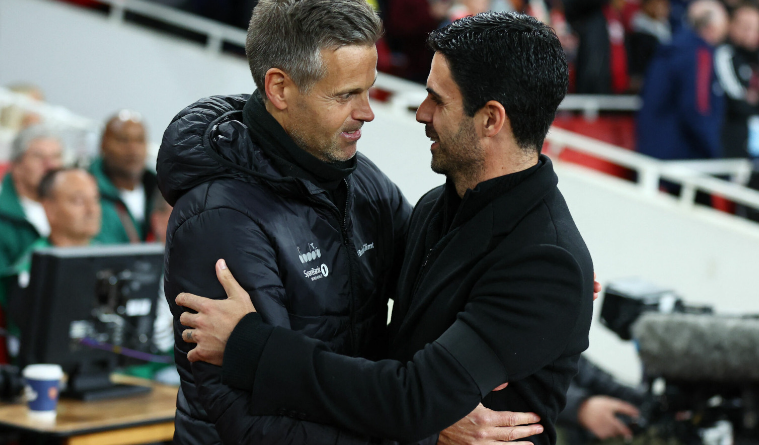 Mikel and Kjetil exchanging pleasantries after the match at Emirates

“What this team and this coaching staff has done in the last few years is remarkable. Especially in Europe, because it’s got more headlines than the rest of Europe, but without a question of doubt, the scores that they’ve had here explain themselves… They are one of the contenders to be at the top of the group for sure at the end of the games. Tomorrow again we will have a difficult test.”

“What we think about is how we are going to win the game. That’s it. How we win every three days, in different conditions, in different contexts, in different weather, in different competitions, and that’s the only way we are approaching it… Every game is crucial. Looking at the group, tomorrow’s result is going to be really important because we can eliminate playing an extra two games and the opponents that you will be facing after that, so we know that we want to be top of the group.”

The Gunners are having a strong campaign so far, but in the Europa League, they have to rotate the squad a lot. The Londoners did have a huge advantage in the first match, but Bodø also created some good chances earning 0.8 xG, which is close to a converted goal. The Norwegians now play at home, with the full support of the stands. Note that they have won 14 straight Eurocup games at the Aspmyra Stadium.

Plus, both teams rarely play on nil and have good performers up front. A week ago, the opponents fired 26 shots against each other, with the Norwegians not far behind in shots on goal (six against four).

Don`t miss out 👉: NorthEast United vs Hyderabad: Preview and Prediction