The match ended 1-1 after 120 minutes where Joe Aribo and Rafael Santos Borre got their names on the scoresheet, but the German side edged past the Scottish team 5-4 on penalties.

Oliver Glasner made only one change to the team that drew 2-2 in Eintracht Frankfurt’s last fixture against 1. FSV Mainz 05. Danish midfielder Jesper Lindstrom was preferred to AC Milan loanee Jens Petter Hauge for a starting XI role.

On the other hand, Giovanni van Bronckhorst rested all of his major players for the Rangers’ last game against Heart of Midlothian. Accordingly, he made eleven changes to his starting XI for this clash, bringing back the big names to help his cause.

It was the German side that had a better start, with Lindstrom almost justifying his selection immediately with a shot in the 3rd minute, but his effort flew over the crossbar. In the next ten minutes, Daichi Kamada and Djibril Sow had attempts on target, but neither could beat the Gers’ custodian Allan McGregor.

Ansgar Knauff then joined the list of Frankfurt players to have had their shots saved by McGregor in the 20th minute, whilst only a minute later, Evan Ndicka almost found the back of the net with his header from a corner.

After doing nothing but defending for the first 25 minutes, the Scottish side finally had their first chance of the game in the 26th minute when Scott Arfield played a pass for Aribo, but the Nigerian midfielder could not keep his shot on target.

Though it did not result in a goal, this attack helped instil confidence among van Bronckhorst’s players as they had another chance in the 36th minute. Borna Barisic put up a great cross for John Lundstram, but the experienced midfielder could only find the opposition’s goalkeeper, Kevin Trapp. Rangers had yet another opportunity just seconds before the lemon break when Ryan Jack had a go at goal, but his strike narrowly missed the crossbar.

Just like the first half, it was Eintracht Frankfurt who had a better start to the second half with Tuta and Lindstrom both getting chances to break the deadlock. While they failed, the Rangers scored completely against the run of play in the 57th minute when Aribo’s left-footed shot rippled the net.

Desperate for retaliation, Glasner’s team almost equalized in the 67th minute when after receiving a pass from Sebastian Rode, Kamada pulled the trigger and missed the target only by a whisker. However, it did not matter much in the grand scheme of things as the equalizer eventually arrived only a couple of minutes later.

Serbian midfielder Filip Kostic launched a cross into the box which found Borre, and given his performances in the last few games, it was certain that the Colombian was not going to miss from that range. 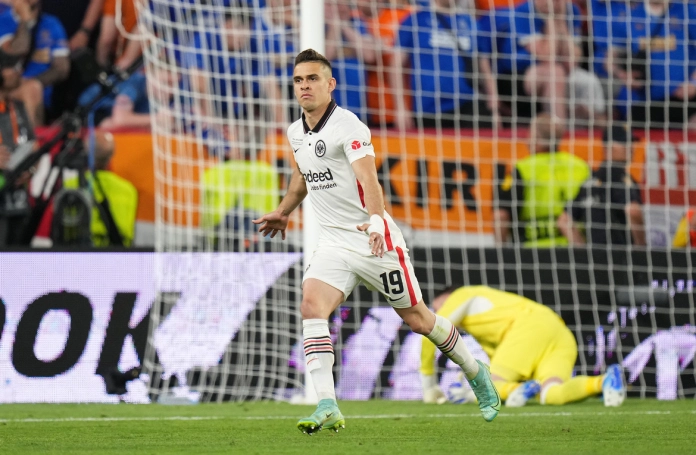 With the scoreline at 1-1, it seemed both teams had signed a mutual pact to take the game deep, as neither team were too interested in going for the kill. Substitute Hauge had a shot for the Eagles when Glen Kamara tried to be the Rangers’ hero, but neither possessed the precision needed to get their names on the scoresheet.

In the first half of extra time, Arfield went for glory for the Gers in the 94th minute, followed by Knauff’s shot only six minutes later. However, following the established pattern, they too were not clinical enough to add to the scoring.

Though the match was majorly dominated by the Bundesliga outfit, it will be fair to say that van Bronckhorst’s team had adequate chances to seal the deal in the second half of extra time and avoid penalties. Trapp made an exceptional point-blank save in the 118th minute to deny Kent the chance of making headlines, while just seconds before penalties, he did well to save James Tavernier’s freekick.

In the penalties, all five of Frankfurt’s penalty-takers, Christopher Lenz, Ajdin Hrustic, Kamada, Kostic and Borre were on the money. On the other hand, while Steven Davis, Arfield, Tavernier and Kemar Roofe scored for Rangers, Juventus loanee Aaron Ramsey’s penalty was saved by Trapp to earn Eintracht Frankfurt their second UEFA Europa League title.

The Bundesliga club will be making their first appearance in the UEFA Champions League since 1960 during the 2022-23 European football season.