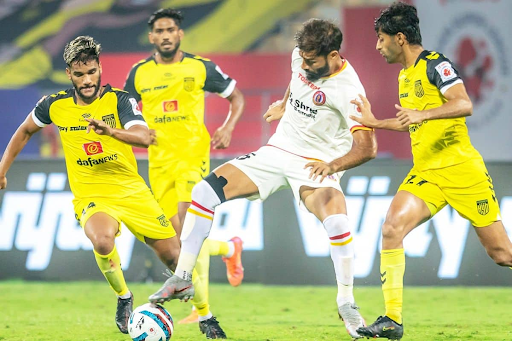 Hyderabad will be looking to get back to winning ways

‘Match 70’ of the 2021-22 season of the Indian Super League will see the high-flying Hyderabad clashing with East Bengal at the Tilak Maidan Stadium on Monday.

Though we are only halfway into the season, Hyderabad has emerged as one of the prime contenders to qualify for the semi-finals. Manolo Marquez’s men have accumulated 17 points from their 11 matches and are occupying fourth place in the league standings.

On the other hand, East Bengal has had a forgettable campaign so far, but things are finally looking on the up for them. The Red and Golds are placed in the tenth position, having bagged 9 points from their 12 outings.

Hyderabad’s current form is not particularly convincing, as they are without a win in three matches. The Nizams could only secure a 1-1 stalemate in their previous match against Chennaiyin.

Marquez’s team was handed a 1-0 defeat by Kerala Blasters in the match before that, which happened to be only their second defeat of the season. Hyderabad has a knack for playing out draws and before facing the tuskers, they played out one such draw against ATK Mohun Bagan, which produced a 2-2 scoreline.

East Bengal will come into this game with renewed vigor as they registered a 2-1 triumph over Goa in their last match. Not only was it their first win of the season, but it also marked the Red and Golds’ first victory in 347 days.

In the two matches before facing the Gaurs, the Kolkata-based team suffered a 1-0 defeat against Jamshedpur, while they did incredibly well to restrict reigning champions Mumbai City to a 1-1 draw despite fielding an all-Indian starting XI.

Hyderabad has the edge in terms of head-to-head records, as they have won one of the three fixtures against East Bengal, while the other two matches ended in stalemates. One such draw was played out earlier this season when Amir Dervisevic opened the scoring for the Red and Golds, but a Bartholomew Ogbeche strike helped the Nizams rescue a point. 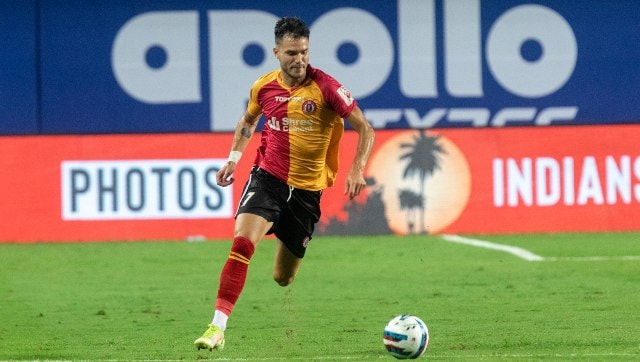 Having served his suspension, Antonio Perosevic is likely to feature in East Bengal’s starting XI

Hyderabad will be boosted by the return of their Nigerian marksman Ogbeche, who is available for selection after serving his one-game suspension. He is likely to replace Javi Siverio upfront, while Marquez is likely to make two more changes to the team that drew against Chennaiyin.

Souvik Chakrabarti failed to justify his place in the middle of the park, which might tempt the former Las Palmas manager to reinstate Hitesh Sharma in that position, while Nikhil Poojary is expected to make way for Mohammad Yasir at the right flank.

In the first match of his second stint with the Red and Golds, Mario Rivera fielded a 4-3-3 formation which turned out to be a masterstroke, as every player seemed to be aware of exactly what is expected from them.

Whilst keeping the formation intact, the Spanish tactician is likely to make two changes. Croatian forward Antonio Perosevic is expected to be back in the starting XI after serving his five-game suspension, while new acquisition Marcelo Ribeira could also feature after completing his quarantine period. Mohammad Rafique and Thongkhosiem Haokip are likely to make way for the overseas duo.

Though East Bengal’s current form is better than Hyderabad’s, the latter has had a much better overall campaign while Ogbeche’s presence could spark a few nerves among the Red and Golds’ defenders. Hence, we have predicted a 3-1 Hyderabad victory.