East Bengal secured their first win of the 2022-23 Indian Super League season on Thursday as they handed NorthEast United a 3-1 defeat at Guwahati’s Indira Gandhi Athletic Stadium. Cleiton Silva, Charalampos Kyriakou, and Jordan O’Doherty scored the goals for the Torchbearers, whilst the Highlanders’ lone goal was netted by Matt Derbyshire.

NorthEast United’s head coach Marco Balbul made only one change in his starting XI. Parthib Gogoi, who looked completely off-color in the last match against Hyderabad, was replaced by Rochharzela.

The game had a fast-paced start, but neither side could create a clear-cut opening inside the first ten minutes. East Bengal struck first in the 11th minute of the game, and it was purely a gift from the Highlanders.

Mohamed Irshad tried giving a back pass to centre-back Gaurav Bora, but it was intercepted by Silva. The Brazilian forward then did the most important part – sending the ball to the back of the net – with great ease.

Balbul’s team created their first opportunity five minutes after going down. From the right flank, Rochharzela launched a cross into the box which found Derbyshire, but the Englishman could not keep his header on target. 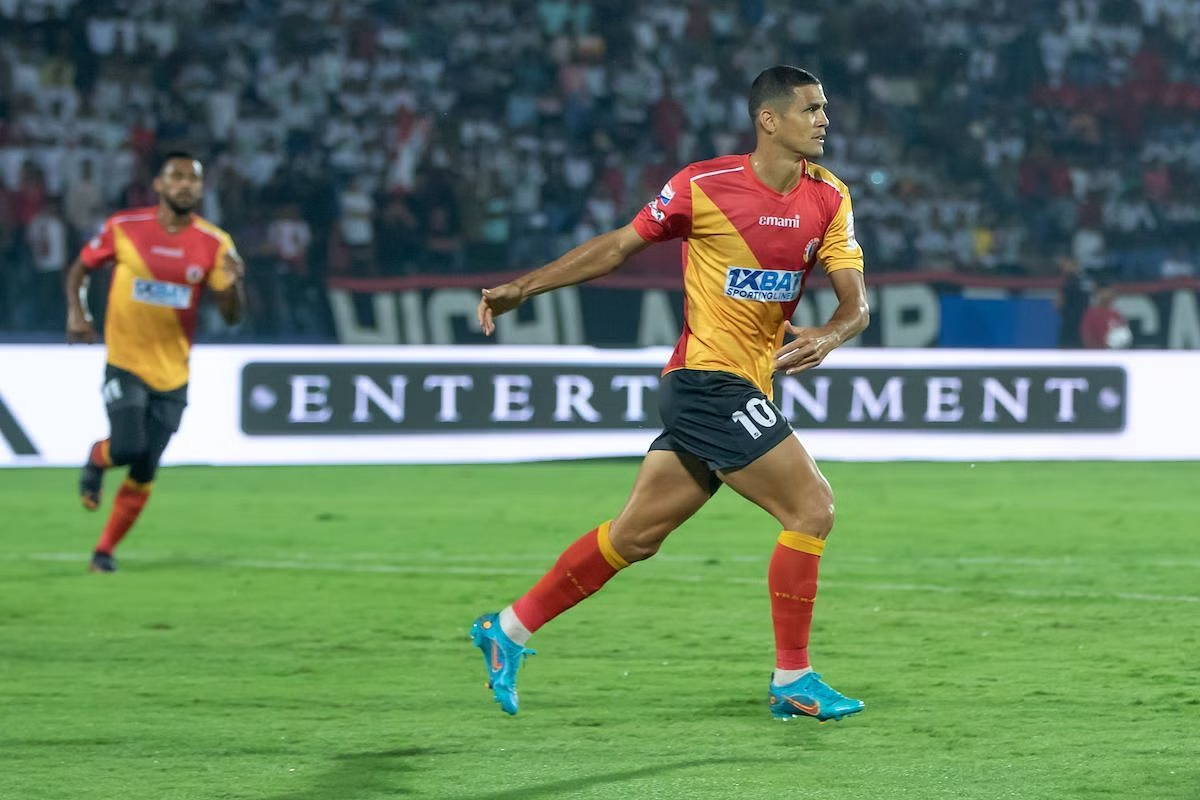 However, Constantine’s boys dominated proceedings and almost doubled their advantage in the 19th minute when Silva attempted another shot, but this time around, it was deflected for a corner. Just before the half-hour mark, he had yet another opportunity and launched yet another powerful shot, but it struck the side netting.

The Torchbearers kept on launching one attack after another, but having conceded an early goal, the NorthEast United backline did not let in another goal in the first half. Instead, the Highlanders could have scored an equalizer just moments before the break.

Emil Benny, who replaced the injured Romain Philippoteaux in the 32nd minute, struck a shot with great venom which was directed straight at Kamaljit Singh, but the East Bengal custodian spilt it. The ball fell kindly for Derbyshire, but despite having only the goalkeeper to beat, the former Blackburn Rovers striker could not score.

After withstanding the pressure, East Bengal once again took control of the match and had a chance of scoring in their second just two minutes into the second half. A cross from the right flank by VP Suhair was cleared by one of Balbul’s defenders, but it once again came back to Suhair, who snatched his shot straight at the opposition goalkeeper, Arindam Bhattacharja.

Only a minute later, Jerry Lalrinzuala delivered a fantastic cross from the left flank, but yet again, Suhair missed a gilt-edged chance as he could not meet the ball. East Bengal’s series of attacks continued, as Silva went for glory once again in the 49th minute, but his strike missed the target by a hair’s width.

However, Constantine’s side did not have to wait long to score the insurance goal. After a darting run down the right flank, Suhair cut back a pass for Kyriakou, and the Cyprus international struck a sensational shot to leave the NorthEast United defense stunned.

The Highlanders had the chance to pull one goal back in the 64th minute when in an attempt to clear a cross, Ivan Gonzalez ended up sending the ball straight to Imran Khan’s feet, but the Manipuri winger could not keep his shot on target. A couple of minutes later, Jon Gaztanaga had an effort on target, but his shot was saved by Kamaljit.

Balbul’s team played well after conceding the second goal, but against the run of play, East Bengal struck once again in the 84th minute. An impressive counter-attack saw Mobashir Rahman running with the ball before playing a defense-splitting pass for O’Doherty, who then completed the task by beating Bhattacharja with his effort.

It seemed that the game would end 3-0 in East Bengal’s favor, but Derbyshire got a goal back for the hosts right at the very end. From a corner launched by Benny, the 36-year-old jumped the highest to reduce his team’s deficit.

With this defeat, NorthEast United remains at the bottom of the table and they will now take on Jamshedpur next Sunday. Meanwhile, East Bengal has climbed to the 7th place, and their next outing is the highly anticipated Kolkata Derby against ATK Mohun Bagan, which will be played next Saturday.