Former Bengaluru striker made himself an East Bengal hero

East Bengal finally bounced back to winning ways in the 2022-23 Indian Super League season, as they secured a 1-0 win over Bengaluru on Friday at the Sree Kanteerava Stadium in Bengaluru as Cleiton Silva scored the solitary goal of the match.

Bengaluru coach Simon Grayson made three changes to the starting XI which lost 0-1 against Odisha. Injured attacker Sivasakthi Narayanan was replaced by Udanta Singh, while Leon Augustine and Jayesh Rane made way for Suresh Singh and Javi Hernandez respectively.

On the other hand, East Bengal’s gaffer Stephen Constantine made only one forced tweak to his starting XI that lost against Chennaiyin. Right-back Sarthak Golui, who had to serve a one-match suspension, was replaced by Ankit Mukherjee.

The game had a pretty sedate start, with neither team being able to penetrate the opposition’s half. Bengaluru had a half-chance in the 7th minute when skipper Sunil Chhetri went for a volley, but his attempt did not trouble Kamaljit Singh under the Torchbearers’ goal.

Three minutes later, it was East Bengal’s turn to return the favour as Charalampos Kyriakou attempted a long-ranger. His shot was both powerful and on target, but the Blues’ custodian, Gurpreet Singh Sandhu was up to the task. 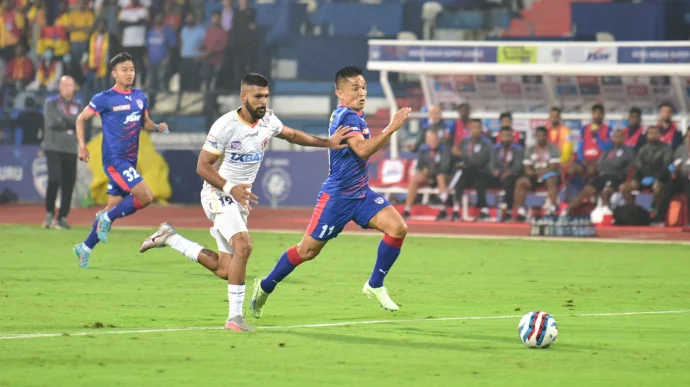 Grayson’s team almost found an opening in the 13th minute when Hernandez played delightful through ball for Chhetri, but before the veteran could pounce on it, Mukherjee made a sensational sliding tackle to clear the danger.

Hernandez himself had a chance from a free-kick a few minutes later, but could not keep his shot on target. Just after the half-hour mark, Silva had an opportunity to hand East Bengal the lead from a corner, but once again, Gurpreet came to the Blues’ rescue.

The Brazilian forward had another opportunity in the 43rd minute when a precise through ball found him one-on-one with the goalkeeper, but centre-back Sandesh Jhingan came from behind to put in a spectacular tackle.

The second half started just how the first period did, with both teams struggling to create clear-cut chances. The first chance of the half came just after the hour-mark when Hernandez played yet another defense-splitting through ball. This time around, it was striker Roy Krishna who found himself one-on-one with the keeper but dragged his shot wide.

Silva had another crack at the goal only a minute later, and while this attempt sailed over the crossbar, the Brazilian did manage to break the deadlock in the 69th minute. A swift counter-attack placed Grayson’s defense under immense pressure, and Suresh was not able to deal with it.

In a state of panic, he tried to play a back-pass to Gurpreet but ended up under-hitting it. The ball was eventually collected by Naorem Mahesh Singh, who then unselfishly placed it on a platter for a completely unmarked Silva. From a handshaking distance, the former Blues’ marksman had no issues whatsoever in scoring against his former team.

He could have doubled his and his team’s lead only four minutes later when another counter-attack found him through on goal. Seeing Gurpreet had come out of his line, he went for a cheeky chip but ended up hitting it over the bar.

The 35-year-old kept on haunting the Blues’ backline and he had another shot in the 78th minute, but this time, Gurpreet could not be beaten. Instead, the Indian number one played a long ball which found Chhetri completely unmarked in the opposition’s box, but the 38-year-old let another chance go begging as he struck his shot straight at Kamaljit.

In the 89th minute, another long ball found Krishna in space inside the box, but before the Fiji international could take his shot, centre-back Ivan Gonzalez made a great tackle from behind to take the ball away from his reach.

With this win, East Bengal has climbed to eighth place with six points from as many games. They will now take on Odisha on Friday, while Bengaluru, who slipped to the ninth place, will be up against Mumbai City on Thursday.