East Bengal secured their third win of the season

On the other hand, East Bengal head coach Stephen Constantine made three changes to the team that lost 2-4 against Odisha. Full-backs Sarthak Golui and Jerry Lalrinzuala returned in place of Ankit Mukherjee and Pritam Singh respectively, whereas the injured Charalampos Kyriakou was replaced by Alex Lima.

The game had a blistering start with the Torchbearers taking the lead in the 2nd minute. After receiving a pass from Lima on the left flank, Naorem Mahesh Singh launched a delightful cross into the box and Suhair did the rest by glancing his header past a helpless TP Rehenesh in the Red Miners’ goal.

Boothroyd’s team almost restored parity only four minutes later when centre-back Pratik Chaudhari got his head to a cross from a right flank, but East Bengal’s custodian Kamaljit Singh came to his team’s rescue.

The next exchanges of the game were evenly contested, but the killer blow was handed by East Bengal as the Torchbearers doubled their lead in the 26th minute. A swift counter-attack saw Silva playing a pass for Mahesh, who then darted down the left flank before placing an exquisite cross for the Brazilian striker inside the box. With only Rehenesh to beat, Silva made no mistake in making the scoreline 2-0.

Just after the half-hour mark, Thomas had an attempt when he tried a bicycle kick, but the Englishman could not keep his strike on target. However, he got another opportunity a few minutes later when East Bengal conceded a penalty.

From a right flank, a cross was delivered into a box and Sawyer and Lalchungnunga were the dup who contested for it. While the latter won the header, referee Crystal John adjudged the young centre-back to have fouled the Australian striker. From the spot, Thomas sent Kamaljit the wrong way to reduce Jamshedpur’s deficit.

Sawyer himself could have got his name on the scoresheet when Boris Singh launched a cross for him in the 43rd minute, but the former Newcastle Jets striker could not keep his header on target. Two minutes later, Peter Hartley had a headed attempt and it was on target this time around, but Kamaljit put in a good save.

Boothroyd’s men started the second half on the front foot and could have restored parity in the 48th minute when Sawyer found himself at the end of a long throw, but his header was directed straight at Kamaljit.

Nine minutes later, the Red Miners squandered another opportunity when Chukwu delivered a cross into the box. Thomas did well to get his head to it and also keep his header on target, but yet again, Kamaljit put in a save to safeguard his team’s lead. 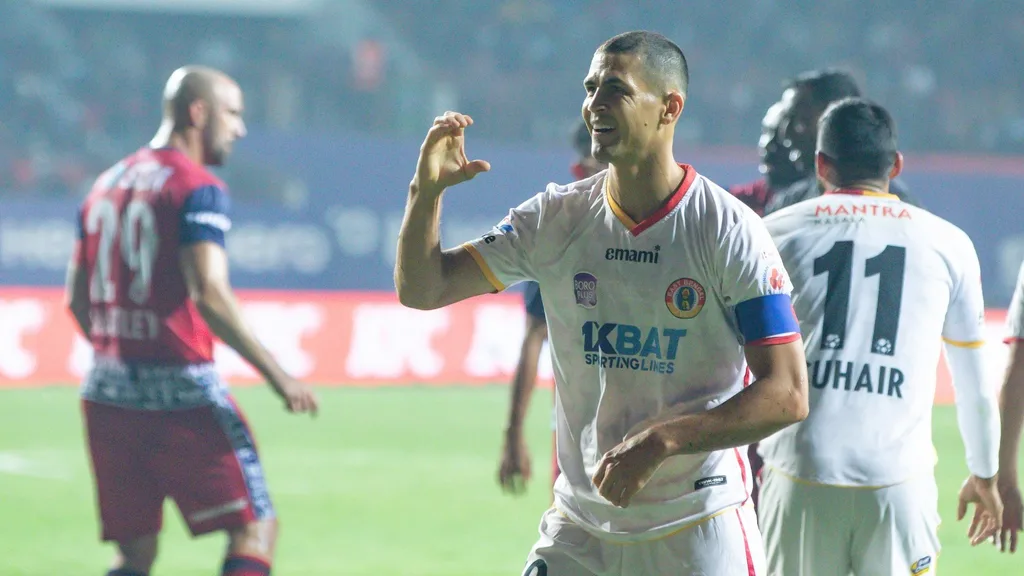 The string of misses turned out to be costly as East Bengal restored their two-goal advantage only a minute later. Mahesh played a defense-splitting pass for Silva, who yet again proved his calibre by beating Rehenesh with a precise shot.

The Brazilian could have completed his hat trick in the 71st minute. From a free-kick, Silva kept his attempt on target, but Rehenesh could not be beaten this time around. He had another attempt from a free-kick a few minutes before the final whistle, but could not keep his shot on target.

With this win, East Bengal climbed to the eighth position with 9 points to their name. They will now take on Hyderabad next Friday, while Jamshedpur, who remain 10th with 4 points, will be up against Kerala Blasters on Sunday.