Defending champions Hyderabad extended their unbeaten run as they secured a 1-0 win over Odisha in the third match of matchday 5 of the 2022-23 Indian Super League season. The solitary goal of the match was scored by Mohammad Yasir.

Though his team defeated Goa in their last match, Hyderabad coach Manuel Marquez Roca made a change to his starting XI. Bartholomew Ogbeche did not feature from the start in this fixture. In his place, Borja Herrera got a chance to showcase his talent.

The first few minutes of the match were cagey, with no team being successful in getting hold of the situation. However, the Nizams struck a massive blow in the 8th minute. Halicharan Narzary used his trickery to get the better of Meitei and then launch a precise cross, which was met with by Yasir. Odisha custodian Amrinder Singh might have got fingertips to the header, but it was too powerful to be stopped.

Roca’s men could have doubled their lead only eight minutes later. Nikhil Poojary sent a cross into the box, which was dealt with by the Odisha defenders, but the loose ball eventually landed at Borja Herrera’s feet. The Spaniard did well to pull the trigger, but his attempt was not on target.

It took Odisha almost half an hour to launch a substantial attack. After receiving a pass on the right flank, Isaac Vanmalsawma launched a cross into the box, and though Saul Crespo got his head to it, his attempt sailed over the crossbar.

Only a minute later, the Nizams squandered an easy opportunity. Once again, Poojary was a livewire down the right flank as he sent a delightful ball for Narzary, but the creator of the first goal fluffed his lines and could not get a proper connection on his shot.

In the 33rd minute, Roca’s team had yet another opportunity when Javi Siverio let go of a powerful hit, which took a deflection and fell kindly for Yasir. However, the goal-scorer could not add to his tally and his attempt lacked precision this time around. 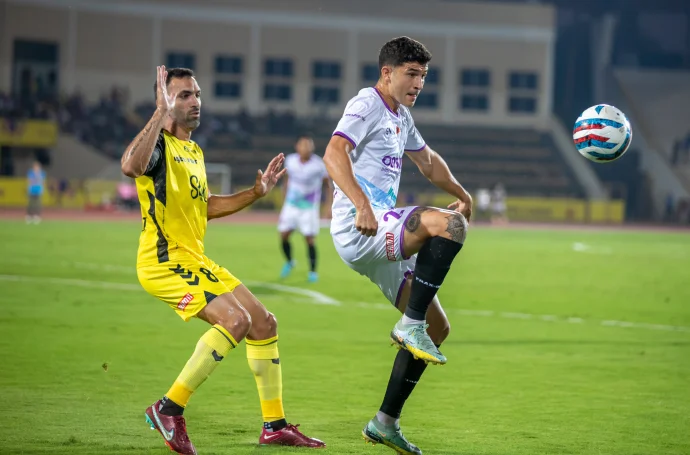 Gambau introduced Pedro Martin to his attacking arsenal in the second half, and the former Atletico Madrid forward almost produced the goods only six minutes into the half. After receiving a ball from Osama Malik, he tried his luck from the edge of the box, but it missed the target.

A couple of minutes later, Nandhakumar Sekar stormed down the left flank and then sent in a cross-field ball into the box. Despite not being among the tallest of players, Jerry Mawihmingthanga did well to meet the ball with his head, but the attempt was deflected for a corner by a Hyderabad defender.

Against the run of play, the Nizams should have scored the insurance goal in the 66th minute. Herrera’s brilliant corner found full-back Akash Mishra completely unmarked, but he could not even connect with the ball.

Roca’s team let another chance go begging only four minutes later. Ogbeche played an exquisite one-two with Joel Chianese before launching a powerful strike, but this time around, Amrinder did enough to prevent it from finding the back of the net.

With nothing working out in his team’s favor, Kalinga Warriors’ substitute Isak Vanlalruatfela had a go from a long way out in the 82nd minute, but instead of troubling Laxmikant Kattimani in the Hyderabad goal, his effort made its way to the stands. It turned out to be the last attempt of the game, as stern defending from the likes of Odei Onaindia and Chinglensana Singh helped Hyderabad retain their one-goal lead.

With this victory, Hyderabad climbed to the top of the table with 13 points. They will now take on Jamshedpur on Wednesday, while Odisha, who are now third with 9 points, will enjoy a break in matchday 6, before meeting East Bengal on 18th November.