Both teams are in dire need of a victory

‘Match 68’ of the 2021-22 season of the Indian Super League will see Chenaiyin locking horns with NorthEast United at the Fatorda Stadium on Saturday.

Chennaiyin’s journey so far this season can be divided into two halves. Bozidar Bandovic’s team had a very promising start but have recently lost their spark. With 15 points from 11 matches, they are at the seventh position in the league standings.

On the other hand, NorthEast United has been consistent – that is, they have been consistently poor so far. Last season’s semi-finalists have only accumulated 9 points from 12 matches and are occupying the bottom place.

Chennaiyin will go all guns blazing for a win in this match, as they have only picked up a solitary point from their last three matches. In their last match, the Marina Machans were restricted to a 1-1 draw by Hyderabad.

The contest before that saw Bandovic’s team suffering a 1-0 defeat against a struggling Goa team, courtesy of a late Jorge Ortiz goal. That defeat caught many by surprise, as Chennaiyin arrived at that game after beating a high-flying Jamshedpur team.

It has been over a month since NorthEast United’s previous triumph and in their last three matches, Khalid Jamil’s men have also accumulated one point. They were handed a 2-0 defeat by Odisha in their last encounter.

Before facing the Kalinga Warriors, the Highlanders held Goa to a 1-1 stalemate. Though they failed to hold on to their lead in that match, it was a crucial point nonetheless as they were beaten by Jamshedpur in the contest before that.

Chennaiyin is a two-time winner whilst NorthEast United has never lifted the trophy, but when it comes to head-to-head records, the latter holds the upper hand. The Highlanders have won six of the fifteen fixtures against Chennaiyin. The Marina Machans have emerged victorious on four occasions, with five matches ending in stalemates.

That being said, the first meeting of this season ended 2-1 in Chennaiyin’s favor. Lallinzuala Chhangte and Anirudh Thapa were on the scoresheet for Bandovic’s team, while a Vishan Kaith-own goal comprised the Highlanders’ only joy. 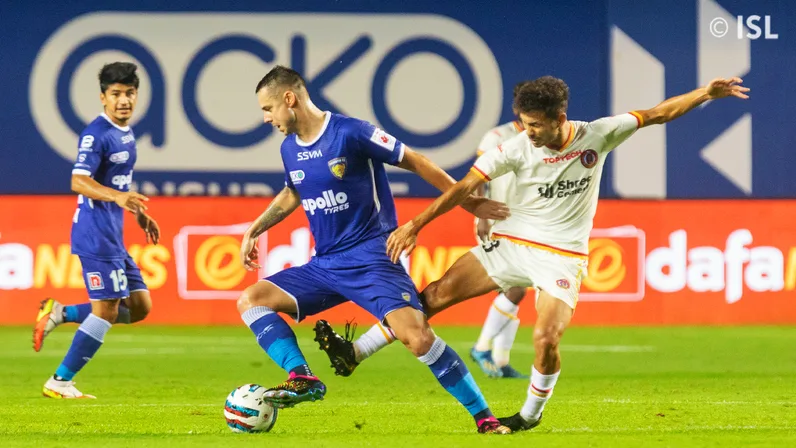 Ariel Borysiuk could be back in Chennaiyin’s starting XI

Chennaiyin’s Polish midfielder Ariel Borysiuk has recovered from his injury and will be available for selection in this match. He is likely to replace Germanpreet Singh in the starting XI after the India international’s subpar display in the last match against Hyderabad.

While this change looks to be a straightforward one, Bandovic might take a gamble with another bold change. Nerijus Valskis has not had a good start to his second chapter with the Marina Machans and failed to register a single shot or create a chance in the last match. Lukasz Gikiewicz looked far more convincing when he came on and he could be handed a start in this match.

Though NorthEast United is yet to officially announce the signing of Marco Sahanek, the Austrian midfielder has already completed his quarantine period and could be seen in action as early as this match.

He could replace Sehnaj Singh in Jamil’s midfield, whilst we can expect two more changes. Tondonba Singh could come in for Provat Lakra at right-back, whereas Mapuia is expected to make way for Laldanmawia Ralte upfront.

Though both sides have been poor in their recent run of fixtures, Chennaiyin has had a much better overall campaign as compared to their opposition. Hence, we have predicted a 2-0 win for the Marina Machans.