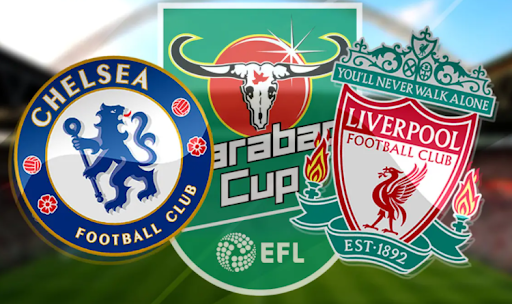 Chelsea will meet Liverpool in the final of the English League Cup this Sunday, February 27. It will take place at Wembley Stadium and start at 22:00 IST.

Here we are in the English League Cup final. Not to say it’s a significant and high-priority trophy for either team considering the heightened battles in the Premier League and Champions League, but there are never enough trophies: both Chelsea and Liverpool are going for the win and it will be a heated battle. The ambitions of these European football giants are relentless. Both teams deserve to win the cup and are in great shape, but who will fill their trophy shelf?

Let’s find out. We’ve compiled a rundown of the most important info and facts to prepare you for the match.

Chelsea approach the game for the trophy with a 7-match unbeaten streak in all competitions. The key to the success of the newly crowned FIFA Club World Cup Champions is a solid defence. In the last 6 meetings, the Londoners have taken the ball out of the net just twice.

On 22 February, the Pensioners made a confident start to the Champions League play-offs. Tuchel’s men beat France’s Lille 2-0 at home in the 1/8 final. Kai Havertz and Christian Pulisic each scored a goal and brought the English side closer to the next stage.

Liverpool also boast an impressive unbeaten run. Klopp’s men have not lost in 12 games in a row, with the Merseysiders winning nine of their last meetings.

On 23 February, the Reds crushed Leeds 6-0 at home. Mohamed Salah and Sadio Mane each netted a double, with Joel Matip and Virgil van Dijk scoring as well.

Liverpool risk arriving at Wembley without their two strikers. Roberto Firmino and Diogo Jota may not have time to heal minor injuries.

Statistical preview of the match Chelsea vs Liverpool:

“Two Champions League-level teams are going to compete for a trophy. We go there to compete against the champions of Europe, we are going there to compete against the champions of the world at this moment in time. We know Chelsea are a top, top team with so much, not just experience but technique and experience. I feel that they are the team who always find the spaces the opposition doesn’t occupy, so we leave space behind our three forwards or four defending, they use, we leave space on the opposite side, they use, we leave spaces between the lines, they use. We have to be spot on in two days but we really look forward to it because we know – and this is what the manager always says – we don’t want to be the best team in the world but we want to be the team who beats or is capable in each moment in time, in each moment of the season, to beat the best teams in the world. And that’s what we’re going to try in two days.”

“Playing against teams who are coached by Jurgen is not only pure pleasure, because they give you a hard time and of course we’re facing him with a very strong Liverpool team on a very strong run of games, run of results, in brilliant form.”

“I think to a 51 or 55 per cent they are the favourites because of recent form, recent results. But we all know, like when we were the favourites against Lille and maybe still are, we know that in the end when we arrive, Lille will play to their full level and they will play the role as an underdog and not accept it as a disadvantage. So will we.”

The German thinks the chances are even.

“We have things to trust on. We have experienced matches, tight matches against Liverpool, the last two were both draws. That will not happen obviously in Wembley, we will find a winner somehow. We know very well what it takes to have a tough match against them and we feel confident we have everything that it takes and now we need to show it. I think it’s the same for them and it’s nice to have a match like this in a final”

“So it’s a big challenge but it’s a big occasion and we feel absolutely competitive regarding our last matches against Liverpool and this is where we want to continue. In the end it’s a pleasure to meet Jurgen, it’s a pleasure to be in a final at Wembley again and I’m very grateful for that.”

In both of the teams’ head-to-head games this season, there have been mutual goalscoring. Chelsea have scored in seven games in a row in all competitions, while Liverpool have nine. The opponents have classy performers upfront, promising a productive final.

In addition, we don’t think either team will leave the field without a goal in regulation time. The teams will be aiming for a result.

Don`t miss out 👉: Manchester United vs Watford: Preview and Prediction