The Bundesliga is back, and the way all the results panned out on matchday 1 perhaps sums up all the intriguing storylines we could yet witness this season. The reigning champions Bayern Munich in complete Bayern style thrashed Eintracht Frankfurt 6-1 in the league opener, while Borussia Dortmund forked out a hard-fought 1-0 win over Bayer Leverkusen. Here’s what went down in the first round of games in Bundesliga 2022-23.

In the first league meeting between Frankfurt and Bayern last year, it was the Eagles who walked away with a surprising 2-1 win, but this season Julian Nagelsmann ensured that there was to be no anti-climax.

New signing Sadio Mane looked at home as he scored his first goal in the Bundesliga, while Jamal Musiala bagged a brace. Joshua Kimmich, Benjamin Pavard and Serge Gnabry were also among the scorers, as Randal Kolo Muani grabbed a consolation goal for the hosts. That, and Bayern are already top of the league! Relentless!

After narrowly missing out on European berths last year, Mainz will be looking to make amends this season and they seem to have struck the right chords as they tamed VfL Bochum 2-1.

Karim Onisiwo opened the scoring for the visitors but Kevin Stoger pulled his side level 13 minutes later. Onisiwo found to back of the net in the 77th minute to score the winner and snatch all three points for Mainz.

Freiburg made light work of Augsburg as the visitors stormed to a 4-0 win in the opening weekend of the Bundesliga 2022-23 season. Michael Gregoritsch started the goal fest, followed by a goal each from Vicenzo Grifo, Matthias Ginter and Ritsu Doan. Having finished sixth in the league last year, Freiburg seems to have picked it up from where they left off.

After spending the 2021-22 season in the 2. Bundesliga, Werder Bremen are back among the big boys and straight-off they were involved in a dogfight with Wolfsburg. The two teams couldn’t be separated as they shared the spoils 2-2.

Lukas Nmecha broke the deadlock after just 11 minutes, but Bremen turned it around in no time courtesy of two goals in the space of three minutes from Niclas Fullkrug and Leonardo Bittencourt. Joshua Guilavogui equalised six minutes from regulation time to steal one point for the Wolves.

Bundesliga fans were treated to the spectacle of the Berlin derby on matchday 1 itself and high-flyers Union Berlin took home the bragging rights as Hertha suffered a 3-1 upset on the road.

Theoson Siebatcheu, Sheraldo Becker, and Robin Knoche found the back of the net for the hosts, while Dodi Lukebakio pulled one back for his side, but it was too little, too late.

After having missed out on European football entirely last, Borussia Monchengladbach put the right foot forward in their first match of the new season. The Foals were down 0-1 after just 25 minutes but they recovered well courtesy of goals from Ramy Bensebaini, Marcus Thuram and Nico Elvedi. 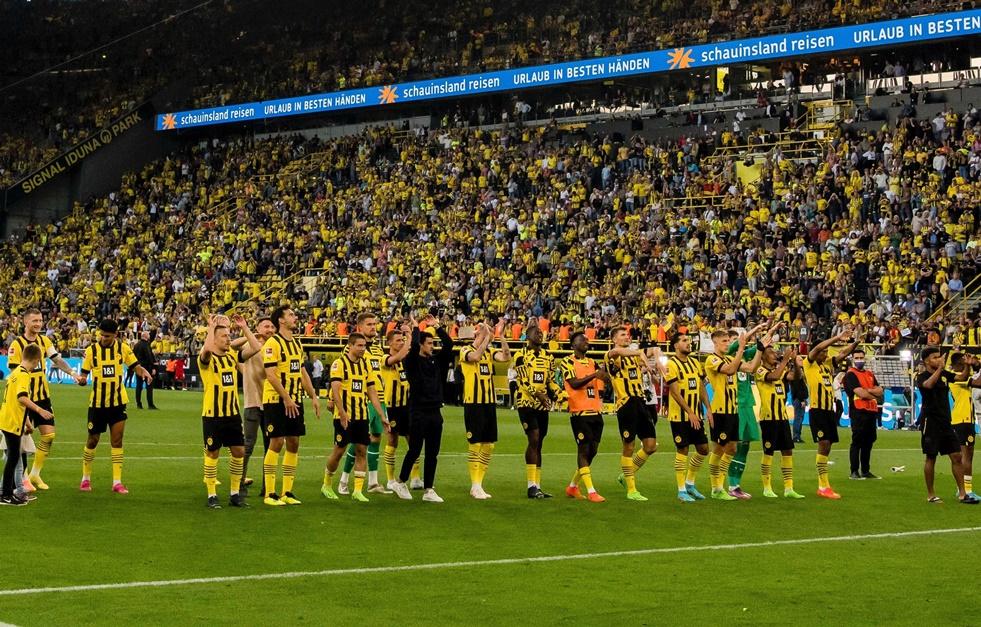 Borussia Dortmund players celebrate in front of the Yellow Wall

The most eagerly anticipated fixture of matchday 1 of the Bundesliga 2022-23 pitted fellow Champions League hopefuls Dortmund and Leverkusen and the BVB emerged victorious courtesy of a goal from their captain, leader, and legend Marco Reus.

Leverkusen kept fighting till the end and was even reduced to ten men as Lukas Hradecky saw a record in the dying moments of the game which further compounded their miseries.

While both Bayern and Dortmund began their respective Bundesliga campaign with a win, RB Leipzig was held to a draw by Stuttgart. Die Roten Bullen started the game well as Christopher Nkunku put his side in the driving seat after just 8 minutes, however, Naouirou Ahamada pulled his side back on level-pegging after the half-mark. Despite the best efforts of both sides, there was no winner and the points were shared.

The final fixture of this week’s Bundesliga action saw Koln take on newly-promoted Schalke but the Royal Blues weren’t able to kick-start their campaign on a positive note after falling prey to a 1-3 loss at the hands of Koln. Luca Kilian, Florian Kainz, Dejan Ljubicic all scored goal one goal each for the hosts, as Marius Bulter’s strike proved to be no more than a mere consolation.